At the intersection of improved technologies and innovative treatment options, more hospitals are seeing hybrid cath labs/ORs as the next big trend. 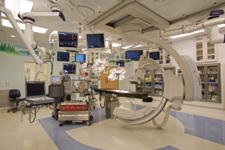 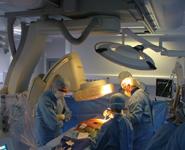 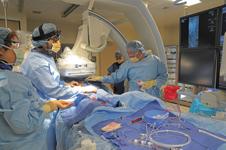 As cutting-edge technologies collide with innovative surgical and interventional treatments for multiple coronary or vascular issues, a hybrid approach is emerging as the best path of action. In recent years, hospitals across the globe have reacted to the “blurring of the lines” between surgical and percutaneous interventions, and the rise of ground-breaking therapies such as the transcatheter heart valve replacement, by installing suites that can accommodate an integrated treatment plan.

Hospitals considering installing hybrid cath labs/ORs — which blend the capabilities of a true operating room (surgeons, anesthesia services, surgical support equipment and sterile techniques) with the high-quality imaging capabilities traditionally found in cath labs — should carefully weigh the potential challenges and benefits of taking this route. For Dr. Mauro Romano, a cardiac surgeon at the Institut Hospitalier of Jacques Cartier in Massy, France, the creation of the new hybrid theater in 2008 reflects a shift in the way cardiovascular problems are approached.

“I don’t think this is just a trend or something that is in fashion,” Dr. Romano said. “This is an evolution. Maybe even a revolution.”

The Best of Both Worlds

The French hospital’s adoption of new heart valve and endovascular therapies, which require a surgical setting in addition to high-quality imaging systems, fueled its decision to install a hybrid suite, with help from Philips Healthcare. From planning to execution, the process lasted from September 2007 until May 2008, when the hybrid suite officially opened. Romano is impressed with the striking difference in imaging quality and the potential to treat complex cases more effectively.

“[A hybrid approach] can offer better solutions to difficult and complex problems,” he said.

The suite is equipped with the Allura Xper FD20 angiography system.

Back in the states, hospitals working with hybrid suites emphasize the distinct advantages of the rooms. At the Hospital of the University of Pennsylvania, Howard Herrmann, M.D., director of interventional cardiology and the cardiac cath labs, describes it as “the best of both worlds.” When the hospital began its first FDA transcatheter aortic valve trial implantations in November 2007, it turned to Siemens for help upgrading a vascular surgical room with cardiology catherization equipment for a hybrid suite. The room is now equipped with hemodynamic monitoring and can function fully as an OR and/or a cath lab.Transcatheter valve procedures require an OR setting to do the job optimally.

“Right now, with the current size of transcatheter valves, the access from the femoral artery still requires a surgical cut down in most patients. We think a hybrid room is a better place to do these things because it is more sterile, and it is easier to transport the catherization skills to an OR that is adequately outfitted than vice versa,” said Dr. Herrmann. “Anyone who has had to do an emergency placement of a patient on cardiac pulmonary bypass would feel you can do that more quickly and safely in an OR, where the staff and pump is right outside the door, than when it has to be called in an emergency fashion to the cath lab.”

“From my standpoint, it basically gives us the advantages of an operating room in terms of sterility, the availability [to do] cardiac pulmonary bypass for complications, and easy availability to general anesthesia, the kinds of things that are more difficult to arrange in the cath lab than in the OR,” Dr. Herrmann added.

As volume continued to grow, a second hybrid OR was built next door and is primarily used for vascular surgery and stent graft implants. It opened in January 2010. Vincent Olshove, CCP, CCT, director of perfusion and manager of the cardiac catheterization and interventional suites at Nationwide Children’s Hospital in Columbus, Ohio, said what fueled the hospital’s adoption of the hybrid room was the need to better treat patients, especially those being treated for hypoplastic left heart syndrome.

“What drove it was that we had these patients in limbo,” Olshove described. “They would have to come in and potentially have a diagnostic/interventional cath, then maybe have to go over for a surgery, and then maybe have potential issues afterwards and come back to the cath lab. The best time to deal with [a complication] is while you are right there with the patient on the surgical table with his or her chest open, not a day or two or three days later when they’re in the ICU, and they’ve struggled for the last couple of days, and now they’re sicker and you have to take them back to the cath lab or OR. We could knock some of that out by just doing it all at one place.”

An early adopter of the hybrid model, Nationwide began with two hybrid cath suites supplied by Toshiba in 2004. The rooms were built around the interventional team, but with the ability to support hybrid procedures. The hospital later constructed a hybrid OR built around the surgical team in 2007. The transition to the hybrid model has been well received by patients.

“From a patient perspective, we’ve changed how we’ve done things a bit. It’s much more convenient for them now,” Olshove said.

These days, patients are typically scheduled for both an interventional procedure and cardiac surgery as a “back up” if the interventional team is unable to resolve the problem.

“The frequency with which we use these rooms for hybrid type equipment continues to increase,” Olshove added.

It Takes a Village

Across the board, experts agree that a spirit of collaboration among all stakeholders is key to the successful installation of a hybrid room.

“It takes a lot of commitment from the center and from the teams that are involved. Having everyone on board as to what the potential vision is to make this work certainly takes a lot of meetings and open minds,” Olshove said.

“Not just at the physician level, but all the way down to personnel.” Dr. Herrmann equates his first experiences working in the new hybrid OR as playing in an away game. “It was a foreign room. I didn’t feel quite as comfortable as I did in my own cath lab. But with time and mutual respect by all parties, it became an extension of the cath labs,” he said.

It’s critical that all potential end-users have input into the design process to make sure no detail, large or small, is missed. Richard B. Shafer, director of project design and planning group for Steris Corp., warns that the creation of such a room in any hospital requires serious work and strategic planning.

“The hybrid OR is one of the most complex rooms to design and plan in a hospital,” he said. “The key is getting the clinical staff to make decisions early on [regarding] who will be involved with the planning. The architect, imaging company and surgical support company must work together as a collaborative team to plan the space, and must gather input from the clinical personnel who will actually use the room for the procedure.”

Shafer recommends hospitals choose an architect with experience in complex procedural room designs, and select the imaging and surgical support companies it will work with early on in the process while the schematic designs are being developed.

“The imaging companies use different support systems to support their technologies (ceiling-based, floor-based and robotic arm-based), so it is essential to make those decisions early,” he said.

Unlike most one-room projects where few parties are involved, hybrid suites can incorporate teams of up to 20 individuals representing all stakeholders, said Jim Norris, senior manager of market development for Steris. Because of the inherent complexities of the project, Norris advises hospitals to not “fast track” the process and allow 12-18 months for solid planning and built out.

Hospitals considering hybrid suites should be aware that certain challenges can arise, including making sense of multiple definitions/expectations of a hybrid suite; space and flexibility needs to accommodate many technologies and personnel; internal “turf wars;” and of course, costs. Taking the time to visit different hospitals who have gone through this process and learning from their experiences can make the transition smoother.

“The biggest thing I would advise is to get a multidisciplinary group together and go out and talk to people who have done it as a group. That will help point out things that you may miss,” Olshove said.

While a hybrid might not be ideal for every hospital, it really boils down to the types of procedures being done and the hospital’s financial abilities. Hybrids do appear to be gaining steam as the wave of the future. As the envelope is pushed in regards to interventional procedures, the stakes are also heightened.

“As technology emerges and we’re coming out with newer procedures and newer ways of doing things, we’re also going to run into situations where we have potentially higher-risk complications that need to be treated immediately, where there is no time to move a patient from point A to point B,” Olshove said. Perhaps most exciting of all, adds Olshove, is the dawning realization of all the doors this hybrid approach can unlock. “We’re still discovering what our capabilities are,” he said. “You’re only limited by the imaginations of the people involved.”