How to Tackle Coronary CTOs 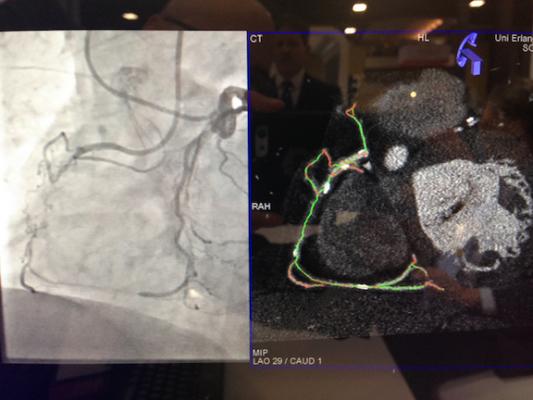 One of the recent hot topics in interventional cardiology has been how operators can use new tools and techniques to treat coronary chronic total occlusions (CTOs). This was a big area of discussion at both the 2017 American College of Cardiology (ACC) and Transcatheter Cardiovascular Therapeutics (TCT) meetings, and has been the focus of several standalone seminars sponsored by the Cardiovascular Reseach Foundation (CRF).

Once an area considered too complex to treat in the cath lab, CTOs are now coming into the main stream. This is partly because of improved imaging and procedural guidance technologies, partly due to new dedicated CTO guidewires, microcatheters and therapy technologies, and partly from new techniques that are constantly being refined by several pioneers in the CTO space.

“This is a field that has grown increasingly over the past few years,” said Farouc Jaffer, M.D., Ph.D., director of coronary interventions at Massachusetts General Hospital, and an expert in CTOs. “Nationally I think it is getting recognized because people are seeing the good we can do for patients. Historically total occlusions were a neglected subset, partly because of the technical complexity and partly because those patients don’t always complain.”

Why Treat CTOs?
There is a major quality-of-life impact on patients with coronary CTOs, and often these patients are not candidates for surgical revascularization. Jaffer said CTOs are found in about 20 percent of patients sent to the cath lab.

“These patients try to minimize their pain by curbing their activities and they often live in a shell of a life,” Jaffer said. “People really need to recognize they are doing good for their patient if they treat the CTO, and a large number of these patients do not really have an option for bypass.”

He said these patients often do not mention any pain or issues with their legs when visiting their cardiologist. But when asked by their doctor, they will often explain how their life is negatively impacted and their quality of life scores are very low. These patients also have higher rates of depression.

Jaffer said catheter-based revascularization of CTOs has an immediate impact on these patients' lives. “We ask patients to self-report their baseline angina and dyspnea before procedures, and then we track it at 30 days and six months after the procedure, and it is amazing to see the improvements,” he explained.

Treatment Options for CTOs
“In parallel with that increasing understanding in how CTOs impact patients, there have been improvements in technologies to treat these patients,” Jaffer said. “This includes advances in guide wires, micro catheters and stents. There also has been a new look at the general approach to treating CTOs. This includes a now greater understanding of the role of imaging, especially intravascular imaging.”

Several years ago, the primary technique to tackle CTOs was using a stiff guide wire to push through to get a wire across the lesion. Today, Jaffer said more complex techniques are used, including dissection re-entry, by going around the plaque and re-entering the vessel after the occlusion. The distal cap of CTOs are often funnel-shaped, making a natural guide for wires to center in the lumen as they are pushed through. Dissection re-entry can also be used with this approach. This retrograde access to the backside of CTOs is accomplished using micro catheters to navigate hair-sized capillaries, Jaffer said. This has led to what is known as the hybrid approach.

“Having these dissection re-entry approaches, both front and back, has really expanded our way to solve these lesions and is the main reason why our success rates have gone from 50 percent to 90 percent in good centers,” Jaffer explained. “With this, the overall procedure times have gone down and the MACE [major adverse cardiovascular event] rates have gone down.”

Angiographic and computed tomography (CT) imaging also play a big role in procedural navigation. Jaffer’s lab conducted a study using Siemens' syngo CTO real-time CT fusion with live fluoro imaging guidance software. He found it made tackling CTOs much easier, because the CT image shows the course of the vessel where there is no contrast flow, making it much easier to navigate occluded segments.

“You don’t know where that vessel goes exactly without the CT,” Jaffer said. “Having that information allows you to be more aggressive about what direction you can point gear in and make progress down that artery. One of the biggest barriers to people joining the CTO field is when they have to dissect a coronary artery and they are concerned they are going to perforate.”

Atherectomy or scoring balloons are sometimes used as well to prepare calcified lesions for stenting to help ensure better stent strut apposition. Jaffer said calcification is an independent risk factor for the complexity of CTOs and lowers the success rate. CT scans are often used for pre-procedural planning, because it will show the areas of heavy calcification. “Whenever we see calcification, we think the complexity rates for both success and procedural complications like perforation are worse,” Jaffer said.

Choosing Tools to Treat CTOs
There are a lot of dedicated CTO devices available on the market, too many for a single operator to become proficient with, explained Bill Lombardi, M.D., director of complex coronary artery interventions at the University of Washington, Seattle, and a top expert in CTOs. He said the hybrid approach to CTOs was partly developed to prevent new operators from becoming overwhelmed by the large number of tools available. He said it is easy to get into “paralysis by analysis,” where there are just too many choices, information overload and confusion about what to pick. He said the idea of the hybrid approach is getting rid of extraneous equipment in the lab and just keeping a handful of tools the operator can master.

“Today, we have way more choices of technique and way, way more choices in guide wires and catheters, so sometimes people can get lost with what is really going on,” Lombardi explained. “It is really important not to say there are 47 CTO wires — just pick three that have very distinctly different properties, and these are the ones we are going to focus on to learn to use. The same is true for picking one type of microcatheter for antegrade, and this type of catheter for retrograde and that is all I am going to have."

He said operators need to become proficient with their tools, and that is difficult to do if there are to many tools to work with.

“There are a lot of me-too devices out there, so don’t get lost in that, just focus on picking very different devices, but keep the number limited. Less choices is actually better,” Lombardi explained.

Most CTO operators pick just three types of wires to use. Lombardi said these include:
• Stiff polymer jacketed wire. An example would be the Pilot 200 (Abbott);
• A stiff penetrating wire, like a Confianza Pro 12 (Asahi) or a Hornet 14 (Boston Scientific); and
• A more steerable guide wire, like a Gaia series (Asahi), if the operator knows where they are going inside the vessel.

“The key is not to get overwhelmed by all the choices and just pick the one you will learn,” he said. After you get proficient, then operators can try different wires to see how they like them.

Learning to Treat CTOs
“This is not something you are going to learn overnight and it is not something you can do just three cases and become proficient at, it's almost a life-long learning experience,” Lombardi said. “You also have to be comfortable being uncomfortable. A lot of that comes from the fact that we use techniques that are contrary to what we have been trained or told to do. So that becomes a bit of a hurdle for people to overcome. You need to realize this has almost nothing to do with angioplasty, other than the patient ends up with a stent. The rest of it is much more similar to TAVR [transcatheter aortic valve replacement] and MitraClip, where there are things you need to do that you really haven’t learned. Those who have been the most successful at CTOs are those who were most open to accepting these new concepts and procedures, rather than fighting the impulse to go back to being a coronary interventionist.”

He said most fellowship programs are not preparing new interventionists to do CTOs, partly because the trainers need to be trained in these rapidly evolving techniques. For this reason, operators need to seek out training opportunities. Lombardi said it is good to attend an observation course where you can watch CTO procedures and learn the lexicon of CTOs. From there, physicians can get involved with proctorship programs, mainly available through vendor-sponsored programs. He said you need a proctor for your first procedure, because there are so many steps and techniques many operators are not familiar with or comfortable doing by themselves.

“The key is don’t do them alone,” Lombardi suggested.

After that, he suggested attending an advanced observational course to learn about some of the efficiencies and nuances of treating CTOs. After that, Lombardi said it is really just self-directed learning. He suggested attending dedicated CTO meetings and seminars at ACC or TCT to learn more about new techniques, since these are constantly evolving.

“Try to get out of your own lab every three to six months and go to a high-volume CTO center to see what they are doing, because my experience has been that the techniques are continuously evolving. Rarely are we doing what we did two years ago. It really is life-long learning because things are changing so rapidly,” Lombardi said.

For interventionists who want to get started treating CTOs, Jaffer suggests starting with the website ctofundamentals.org.

Lombardi suggested attending dedicated courses, including Optimal CTO (formerly known as CTO Fundamentals Live), which takes place May 31 - June 1, 2018, in Madrid, Spain. Another course he recommends is the CTO Summit sponsored by the Cardiovascular Research Foundation (CRF) held in February in New York.

Both Jaffer and Lombardi said it is important for CTO operators to challenge themselves with new techniques. In the end, they said it improved the overall skill set of the interventionist. “They will recognize, as I have, that one becomes a better regular coronary interventional operator after they have invested in the CTO space,” Jaffer stressed.

When to Consider Revascularization of Coronary Chronic Total Occlusions

Understanding the Design and Function of Guidewire Technology

VIDEO: The Evolution of Complex PCI at University of Colorado  — Interview with John Messenger, M.D., and Kevin Rogers, M.D.

How to Tackle Coronary CTOs