Justifying the Use of Vascular Closure Devices 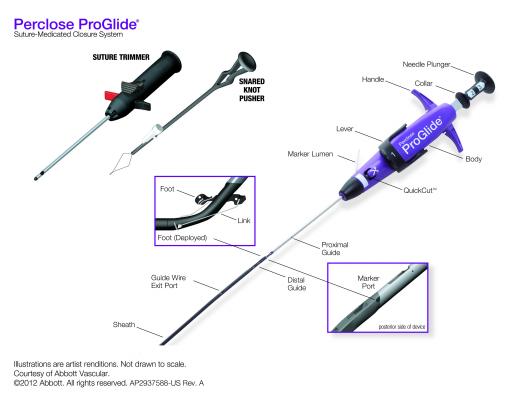 Vascular closure devices (VCD) were first introduced in the early 1990s with a goal to achieve quick hemostasis, thus reducing patients’ stay in the hospital (shorter time to ambulation) as well as faster turnover times for cardiac catheterization laboratories.

All closure devices have a known cost, as well as a finite failure and complication rate. Perhaps this is why VCDs still face resistance in many institutions. Although percutaneous coronary intervention (PCI) using coronary stents is now standard of care, many new devices and/or treatment of bifurcation lesions require larger sheath and guidecatheter sizes. It thus seems intuitive to move away from bulky uncomfortable sand bags and long hours of bed rest when trying to achieve post-procedural hemostasis. However, VCDs are still not widely used and this is driven, in part, by the lack of reimbursement of such devices to this date. The Centers for Medicare and Medicaid Services (CMS), for example, does not reimburse for any of these items specifically, and the commercial indemnity carriers are mixed, but tend to follow the CMS practice.

Types of Devices and Usage

VCDs exist in a variety of models. These include plug, patch, suture and staple models. Many companies have improved on their basic designs in an effort to decrease complication rates while keeping these devices fast and easy to deploy. Several studies followed by meta-analyses were published to date demonstrating non-inferiority to manual compression in terms of their complication rates and patient comfort.

However, what VCDs offer that manual compression does not, is essentially better cath lab efficiency — probably faster patient ambulation times and subsequent discharge. In fact, these devices have proven to be very convenient following PCI where the patient can be discharged the same day, even if their procedures were performed late on their appointment day. Although the latter observation was never backed by a solid randomized control trial, it is our personal approach to discharge all uncomplicated elective PCIs on the same day. Some authors suggested a cost benefit with the routine use of VCDs with PCI. However, VCDs may make less sense, in an era of increasing radial access use. Certainly the VCD may be replaced by a radial wristband compression device, but a simple gauze and tape may accomplish the same thing at a lower cost during radial interventions. What about routine diagnostic angiography? There is no definite answer. With the use of smaller catheters during routine diagnostic studies, there really is no need for the use of VCDs. Hemostasis is usually quickly achieved with minimal patient discomfort, even with same day discharge.

Increasing use of bivalirudin in many labs with less intense anticoagulation during PCI has accomplished two things — less access site bleeding and the appearance of more effective VCDs. How much VCD efficacy over the past 10 years is a result of VCD advances versus changes in anticoagulation strategy is only speculative.

Operator skill also plays a large role with these devices. Most manufacturers (as well as the FDA) require that the first handful of cases be proctored by a sales representative or clinical specialist. Vendors often blame adverse outcomes on inexperienced operators rather than the device itself. Certainly there is no device that is “fool-proof” (although device reps may try to make you believe otherwise). Some require several steps in a specific sequence to use the device properly. Our experience would suggest the more frequently a device is used, the greater its success rate.

VCDs can be very useful when used appropriately in select patients. There are no guidelines to date that dictate their optimal use. Well-designed randomized trials are perhaps needed to answer once and for all the concerns raised by published meta-analyses thus far (although this is unlikely to occur). This could be followed by developing appropriate use criteria for VCDs that would in turn facilitate renegotiation of their reimbursement. As in many other interventional cardiology arenas, the landscape, technologies and practice patterns are rapidly changing, making hard and fast recommendations somewhat difficult.

This article served as an introduction to 3 comparison charts covering hemostasis management devices. Links to the charts for "Hemostasis Management Compression Devices," "Hemostasis Management Hemostatic Pads," and "Vascular Closure Devices" can be found by clicking on the "comparison charts" tab at the top of the page.  Visit Comparison Chart of Vascular Closure Devices. Participants on the charts include: