The trial represents the most comprehensive and largest randomized trial comparing ablation to drug therapy for treatment of atrial fibrillation and paves the way for optimal therapy options for patients. 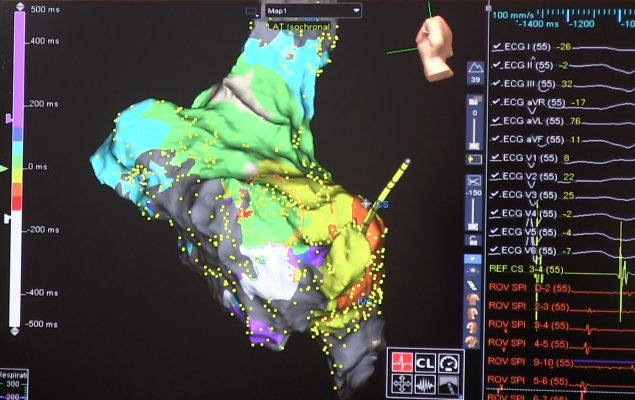 May 16, 2018 – The first results of the randomized, multicenter, long-term, international CABANA clinical trial were presented at Heart Rhythm 2018, the Heart Rhythm Society’s 39th Annual Scientific Sessions. The trial included 2,204 patients across 126 sites worldwide and tested whether primary catheter ablation for the elimination of atrial fibrillation (AF) was superior to state-of-the-art drug therapy. The results affirm that ablation is a safe and effective therapy for AF and, in some cases, is superior to drug therapy.

“We believe CABANA is a landmark trial that provides the evidence we have been looking for in the effectiveness and safety of catheter ablation when compared to drug therapy. Not only is CABANA the largest randomized trial of ablation, but it is also the most comprehensive and inclusive study to show results for outcomes such as mortality, stroke, and CV hospitalization,” said principal investigator Douglas L. Packer, M.D., cardiologist at Mayo Clinic and past president of the Heart Rhythm Society. “We were able to capture an incredible amount of data that shows ablation is an acceptable treatment strategy for treating AF with low adverse event rates even in higher risk patients. The data from this trial has the potential to guide treatment of atrial fibrillation for years to come.”

AF is a common arrhythmia condition that affects an estimated 33 million people worldwide and has been known to increase a person’s risk of stroke and death.[1] Antiarrhythmic drugs (AADs) are considered a primary strategy for treating AF. However, the application of AADs has encountered challenges due to limited efficacy and potential adverse effects. Thus, catheter ablation therapy has become a generally adopted alternative technique for the treatment of AF.[2] Limited studies have compared the therapies and much uncertainty still exists about the benefits of ablation relative to drug therapy.

A total of 2,204 patients were enrolled at 126 sites worldwide from 2009 to 2016. The study population included median age of 68 years, 63 percent male, 81 percent history of hypertension, 10 percent prior stroke or TIA, four percent other thromboembolic events, 36 percent class II or III heart failure, and 10 percent presence of underlying cardiomyopathies. Of the 2,204 patients, 1,096 (49.7 percent) were randomized to drug therapy with membrane-active antiarrhythmic drug therapy and/or rate control and 1,108 patients randomized to catheter ablation, during which all pulmonary veins were isolated. Adjunctive ablative procedures were used at operator’s discretion. Median follow-up was approximately four years.

The primary endpoint was a composite of clinical events consisting of death, disabling stroke, serious bleeding, or cardiac arrest. Secondary outcomes included all-cause mortality; mortality or cardiovascular (CV) hospitalization; mortality, stroke, or hospitalization for heart failure or an ischemic event; recurrence of AF, and quality of life, as well as resource use and cost effectiveness.

The authors expect to publish multiple reports on sub-group analyses and reveal further findings on the impact of age, AF type, and underlying disease for the outcomes of ablation versus drug therapy.

“We applaud Dr. Packer and the entire investigative team for leading this groundbreaking study that represents sound, challenging, provocative science,” said George Van Hare, M.D., president of the Heart Rhythm Society. “It’s studies like these that help propel the EP field forward and allow us to improve patient care for people living with heart arrhythmias worldwide.”