The Latest in Ultrasound Technology 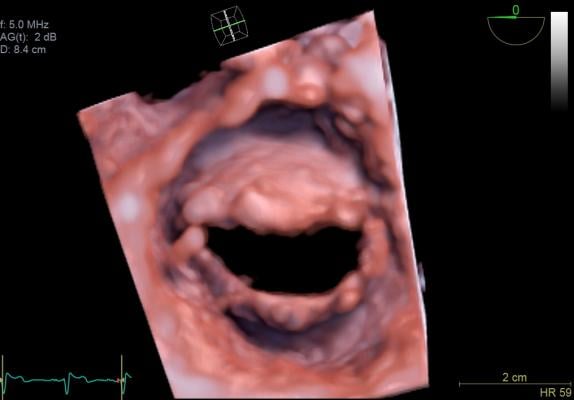 There were some big innovation trends in cardiac ultrasound in 2015. These included the launch of the first premium all touchscreen ultrasound system; the introduction of artificial intelligence to speed, simplify and make cardiac echo more reproducible; and a big advancement in image quality, approaching that of computed tomography (CT) scans.

Additionally, vendors continue to improve overall image quality, ergonomics and workflow and automation on premium-tier systems to handheld, point-of-care (POC) solutions. Vendors also are concentrating efforts to deliver more affordable systems due to the current economic and healthcare reform climate. “Hospitals can’t always buy the premium system, nor does everyone need a premium system,” said Jon Brubaker, MBA, RCVT, ultrasound technology analyst for MD Buyline. “Customers that are doing well have a broad product line, and vendors can go to them and say ‘You may want to mix this product with this product.’ ”

There has been a slow uptake in 3-D ultrasound in recent years, partly due to high expense of these systems and because of the large amount of volumetric image data that first need to be processed into the required 2-D views. Prior to recent automation software, this was very time consuming. “People are saying, ‘I’m perfectly happy with 2-D ultrasound, why should I move to that? It takes more time and I have to learn how to do it,’” Brubaker explained. “But I think we are reaching that stage where it is going to be the standard of care.” He believes what will ultimately push 3-D echo technology past that tipping point is its ability to reduce or eliminate operator variability in scanning and interpretation. Similar to a CT scan, 3-D ultrasound captures a cone shaped volume of image data, which can be sliced and viewed on any plane. This means echo is no longer dependent on the sonographer to get the best possible viewing plane. “It’s one of the most significant things you have to overcome. When you’re using 2-D, you need to do it on repeated cases, and if you’re not getting the exact image or location, it can affect what you’re seeing and ultimately your diagnosis,” Brubaker said.

Watch the video "Trends and Advances in Echocardiography at ASE 2016," an interview with MD Buyline clinical analysts Jon Brubaker and Sabrina Newell at the American Society of Echocardiography (ASE) 2016 annual meeting.

The following were among the top new technologies highlighted on the expo floor at the 2015 Radiological Society of North America (RSNA) annual meeting in December.

At the American Society of Echocardiography (ASE) meeting last summer, GE Healthcare launched its new cardiovascular flagship system, the Vivid E95. It delivers near CT level image quality thanks to GE’s cSound technology. This utilizes advanced algorithms to capture much larger amounts of data than possible on previous echo systems — roughly a DVD worth of data per second. The technology also selects pixel-by-pixel the most precise information to display.

The larger amount of image data that is processed and the new image processing offers much more refined delineation of tissue layers in the myocardium, enhancement to structures such as chordae tendineae, and the ability to more accurately visualize thrombus. The E95’s image processing also improves the quality of obese patients’ exams.

X-ray imaging company Carestream Health entered the ultrasound market with its Touch Prime and Touch Prime XE, which received U.S. Food and Drug Administration (FDA) clearance last June. It is the first all touchscreen controlled premium ultrasound system. The touchscreen uses grooves cut into the glass as landmarks for the trackball function and regularly used buttons. The sealed touchscreen panel is supposed to enable easier infection control measures and streamline operation. The system offers compatibility with several transducers and users can select the desired transducer type with one touch.

One of the biggest issues in echocardiography has been reproducibility of imaging, where exams will vary based on sonography experience and the techniques they use. Philips introduced its solution to this problem last summer with artificial intelligence software that automatically takes the image volume data from 3-D echo and recreates the optimal version of required diagnostic views. The Anatomically Intelligent Ultrasound (AIUS) suite technology was introduced on Philip’s Epiq 7 cardiovascular ultrasound system at ASE 2015. AIUS also uses the 3-D dataset to automatically compute quantification measurements to help clinicians quickly and easily assess disease states and determine treatment with highly reproducible results. Compared to 2-D exams, Philips said the Epiq 7 with AIUS is able to gather left ventricular and atrial volumes and dimensions three to six times faster than manual or semi-automated methods.

Toshiba has focused in recent years on perfusion of small, slow-flow vessels, especially to assess organ perfusion, which has traditionally been difficult on ultrasound. The company introduced its SMI (Superb Micro-Vascular Imaging) software in 2014 to capture 2-D images of these vessels, and this year introduced a 3-D version on its Aplio 300 and 500 systems. The technology displays small vessel beds with Doppler flow in grayscale or false-color 3-D reconstructions, which can be fully rotated for even better visualization.

Ultrasound has seen rapid expansion in recent years to the point of care (POC) market. These systems are primarily used for a quick look to rule in or rule out potential cardiac and vascular issues.

Philips Healthcare opened a new segment of the market last June when it introduced Lumify, the first mobile app-based ultrasound system. The concept turns any Android-based smartphone or tablet device into a handheld, portable ultrasound system simply by plugging a Philips transducer into the device’s USB port and downloading the Lumify app. The transducer performs all of the acquisition functions and a portion of the image reconstruction processing, with the smartphone serving as the display screen and the connection link to the cloud storage archive. Philips offers the system for a monthly subscription price of $199, with both linear and phased array transducers.

Fujifilm Sonosite took a different route for handheld systems, introducing the dedicated iViz ultrasound system at RSNA 2015. While users can perform a number of different exams with vibrant color flow images on the high-resolution, 7-inch display touchscreen, acquisition is only part of the emphasis: iViz is enabled for full bi-directional communication with the electronic medical record (EMR) through Fuji’s Synapse VNA (vendor neutral archive). This means the device can populate patient data from the EMR as well as send reports with just a few taps. “Their approach is it’s not just a smart device, it’s a medical device,” said Brubaker.

In July 2015, Mindray introduced its touchscreen TE7, which operates like and is a similar size to a tablet. Users can tap to start functions, pinch and drag to zoom in and out, and swipe to expand the image. The TE7 features numerous exam presets, with several enhanced cardiac functions including continuous wave Doppler and a transesophageal echo (TEE) transducer.

While the future of handheld ultrasound looks bright, according to Brubaker, the technology is still in its infancy, so time will tell what its role will be. “We know it’s going to be popular and should adapt well, but we’ll see to what extent it becomes part of the market,” he said.

However, if sales of these systems are an indicator the future, POC ultrasound systems may become as common as the stethoscope. GE’s Vscan system was the first pocket POC ultrasound system release a few years ago. GE said at RSNA 2015 it has now sold more than 15,000 Vscans. The company said about half of these sales were just for the most recent version released at RSNA 2014, which offers a combined double-ended probe for both linear and phased array imaging.

This article served as an introduction for a comparison chart of ultrasound systems in our print issue. The chart offers an apples to apples comparison of specifications from various vendors at www.dicardiology.com/content/cardiovascular-ultrasound. To view the chart you will need a login, but it is free and only takes a minute. The vendors in the chart include:

The Latest in Ultrasound Technology

A Glance at Recent Trends in Ultrasound

Five Trends Shaping the Future of the Global Ultrasound Market

Access the most current version of the Ultrasound Systems Comparison Chart (www.itnonline.com/content/ultrasound-systems). This will require a login, but it is free and only takes a minute to complete the form.