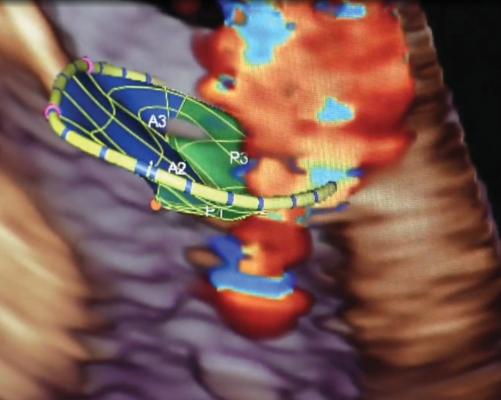 Watch a video showing these and other vendors' echo advanmcements displayed at ACC.18.

At the 2017 Transcatheter Cardiovascular Therapeutics (TCT) meeting, GE showed its innovative blood speckle imaging (BSI) technology on the E95. It tracks individual blood cells on ultrasound as they flow through the heart on dynamic, 4-D echo. The images show the tracked cells as tiny lines moving through the heart, revealing the blood flow patterns and swirls inside the chambers and through the valves. The lines are color coded to show blood flow velocity. This new way to visualize blood flow is widely expected to enable new diagnostic applications  for echo, where patterns in blood flow may show very early signs of valve disease.

The E95 system can image blood flow between 200-400 frames per second (FPS), much faster than the average cardiac ultrasound system, which usually images at 60 FPS. This is enabled by the system’s powerful processing ability, which can process about a DVD worth of data per second.

At the Radiological Society of North America (RSNA) 2017 meeting last November, GE rolled out its first implementation of artificial intelligence (AI) in its ultrasound systems. GE is partnering with Nvidia for AI integration into both computed tomography (CT) and ultrasound. The AI aids the the Vivid E95’s 4-D ultrasound capabilities to speed workflow and automate some features.

AI is also being integrated into GE’s new point-of-care Venue ultrasound system. The user images the patient with a 3-D ultrasound probe and the system’s AI identifies the anatomy being imaged using anatomical landmarks. It then pulls out and displays the optimal views of that anatomy from the dataset. The idea is to save time and speed diagnosis by increasing the reproducibility of the standard views and measurements between various users, regardless of their level of training. GE said it plans to add this AI technology to all its ultrasound platforms.

The GE AI technology is similar to Philips Healthcare’s Anatomical Intelligence used on its Epiq cardiac ultrasound platform. That technology uses 3-D dataset acquisitions of the heart to automatically identify all aspects of the cardiac anatomy and then displays the ideal standard views. It then automatically performs quantification measurements.

Canon Enhances Echo for Structural Heart Evaluation
At ACC.18, Canon launched a more advanced version of its Aplio 900 Cardiovascular system, which was first released in 2017.

The FDA cleared the new version in January 2018. It includes mitral valve (MV) analysis enabling 4-D transthoracic echo (TTE) and transesophageal echo (TEE) for both pediatric and adult patients. It uses 30 seconds of 3-D TEE to auto-derive the standard views of the valve and auto-calculate 44 standard measurements for the MV. This MV analysis takes about 30 seconds to complete. The speed allows it to be used at the patient bedside, cath lab or in the OR, rather than performing these functions post-processing.

Another addition to the system is a new display modality called quad-chamber tracking. It tracks the blood volumes for all four chambers in a single view. It offers both end diastolic and end systolic views of the chambers. See a VIDEO demonstration of this technology.

The Apollo 900 CV was designed with 40 percent fewer keys to simplify workflow and 50 percent lighter than previous Toshiba echo systems. It uses a 256 array, 256 channel driver, while previous systems used a 128 or 64 channel driver. It offers small vessel imaging that can show blood flow in capillary vessels, which is difficult to image on most ultrasound systems. The system also offers 2-D wall motion tracking.

A unique offering on the Lisendo 880 is LVeFlow, which is a simulated contrast echo imaging mode that enhances the left ventricle without the need for bubble contrast.

In addition to the usual echo system functionality, the system offers vector flow mapping (VFM), which can help evaluate the blood flow through the valves and chambers of the heart. VFM is able to quantify the formation of vortices, quantify dissipative energy loss caused by turbulence, aswell as better quantify gradients and regurgitation associated with heart valves and vascular structures.

Watch a VIDEO that shows examples of these technologies.

At the 2017 TCT meeting, Hitachi launched its MXS2 TEE probe. The 3-D probe uses a single crystal matrix with a 10:1 frequency, and can get a high 60-70 volumes per second.

Siemens Launches Portable Echo, Valve Analysis
At ASE 2017, Siemens introduced its eSie Flow valve analysis software. It has a focus on the mitral valve and flow through the left ventricular outflow tract (LVOT). From a 3-D dataset, the system can automate all the measurements, including proximal isovelocity surface area (PISA) regurgitant volumes.

Siemens Healthineers launched a new portable cardiovascular ultrasound solution at ACC.18 — the Acuson Bonsai. The system was created in partnership with Mindray Medical. The 2-D system provides one-touch automatic optimization of the ultrasound image, eliminating the need for manual optimization on the part of the sonographer.  The system also utilizes advanced imaging to optimize specific routine echocardiogram and cardiovascular workflows. The Bonsai is compatible with a set of 14  TTE and TEE transducers.

Last September, the U.S. Food and Drug Administration (FDA) cleared Siemen’s TrueFusion software, which allows integration of ultrasound and angiography to better guide interventional structural heart disease procedures. It is available on the new release 5.0 of the Acuson SC2000 cardiovascular ultrasound system. It addresses the need for fused images, and the new app sends anatomical and functional markers as well as valve models from the Acuson SC2000’s TEE probe to an Artis with Pure angiography system, overlaying ultrasound information with live fluoroscopy images. It allows for seamless integration and co-registration of Artis fluoro and Acuson SC2000 echo.

A Glimpse Into the Future of Cardiac Ultrasound

VIDEO: Editor's Choice of the Most Innovative New Technologies at TCT 2017