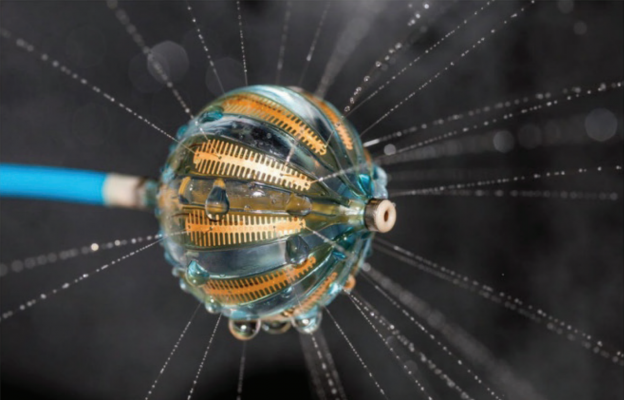 May 17, 2017 – Clinical trial results from a first-in-human study evaluating the acute feasibility of an investigational radiofrequency (RF) balloon catheter in treating patients with atrial fibrillation (AF or AFib) found the device could uniformly achieve pulmonary vein isolation (PVI) in all patients without the need for "touch-up" with a focal ablation catheter. Data from the RADIANCE study was presented for the first time during a late-breaking clinical trial session at Heart Rhythm 2017, the Heart Rhythm Society’s 38th Annual Scientific Sessions.

The “PV Isolation with a Novel Multi-electrode Radiofrequency Balloon Catheter that Allows Directionally-Tailored Energy Delivery (RADIANCE)” study was a multicenter, single-arm, first-in-human feasibility study conducted between Dec. 2, 2016 and March 8, 2017 in Europe. A total of 39 patients were treated with the Biosense Webster multi electrode radio frequency (RF) balloon catheter at four centers with nine different operators from both the U.S. and Europe.

Traditional single point catheter ablation has a success rate of resolving AF in about 60 percent of patients. It is common to have patients come back for repeat ablations. Part of the issue is that completing a solid circle of ablation around the pulmonary veins can be difficult in a beating heart. Traditional catheter ablation procedures also can take hours. Balloon ablation devices can deliver a “one-shot” delivery of energy to complete the ablation in minutes. However, these devices have one major drawback, in delivering a uniform ablation around the entire balloon, which can cause damage to underlying critical structures like the esophagus or phrenic nerve, said Vivek Reddy, director of Cardiac Arrhythmia Services for the Mount Sinai Hospital and the Mount Sinai Health System and study investigator.

“Existing balloon catheters are limited in a number of ways, the most significant limitation being a single ablative element that delivers identical amounts of energy along the full pulmonary vein ostium circumference,” Reddy said. “This can lead to over-ablation of thin tissue, under-ablation of thick tissue, and unnecessary complications. The investigational RF balloon is designed to both optimize safety and efficacy and reduce procedure time.”

The Biosense Webster RF balloon has 10 electrodes around the balloon, which can be programmed to deliver different energy levels to prevent deeper ablation damage to surrounding tissue. Reddy said this allows operators to directionally tailor the energy delivery.

About the RADIANCE Study

The primary endpoint was the incidence of primary procedure-related adverse events occurring within seven days of the procedure. Of note, any pulmonary vein stenosis, unresolved diaphragmatic paralysis or atrio-esophageal fistula that occurred also were analyzed as primary adverse events regardless of timing. Secondary endpoints included serious adverse events occurring over the course of the study and the effectiveness of electrical pulmonary vein isolation despite provocative pharmacological challenge.
In addition, the study included:
• Pre-procedure (baseline) testing included: a 12-lead electrocardiogram (ECG), transthoracic echocardiogram, cardiac computed tomography (CT) or magnetic resonance imaging (MRI), a cerebral MRI, and a neurological exam with administration of the NIH Stroke Scale.
• Repetition of the 12-lead ECG, transthoracic echocardiogram, cerebral MRI and the neurological exam with the NIH Stroke Scale post-procedure (prior to hospital discharge).
• Post-procedure: Esophageal endoscopy of all patients to assess for any evidence of thermal esophageal damage.