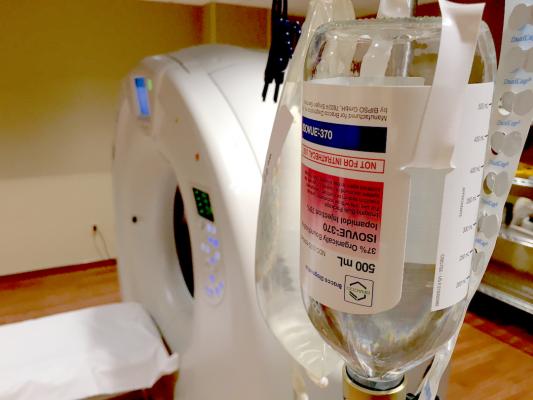 Iodine-based contrast agents used in computed tomography (CT) and catheter-based angiography have been implicated as a cause of contrast-induced nephropathy (CIN). This has raised concern in recent years, especially in renally compromised patients, and imagers are looking for ways to reduce the contrast media dose levels they use.

While a few strategies to reduce contrast usage are outlined below, the last section highlights a recent study that calls into question the causality of contrast agents being the main cause of CIN.

CIN is defined as a serum creatinine concentration increase of at least 25 percent or 44.2 µmol/L within three days after contrast media injection when there is no other etiology for the increase.[1] Persistent renal dysfunction after coronary computed tomography angiography (CTA) due to iodine contrast agents is rare,[2] but precautions should be taken to lower contrast dose whenever possible, especially in patients with compromised renal function.

Is Contrast the Real Cause of Acute Kidney Injury?

However, several recent studies might change thinking on acute kidney injury as an issue directly related to the patient and not caused by contrast. A major issue with many of the studies previously done on CIN was the lack of a control group of patients who underwent non-contrast CT scans. Some studies compared such a control group and found the incidence of acute kidney injury was the same between contrast and non-contrast groups.[3,4,5]

In the largest, most well-controlled study to date of AKI following contrast administration in emergency department CT scans, intravenous contrast was not associated with an increased frequency of acute kidney injury.[3] This single-center, retrospective study conducted at Johns Hopkins looked at 17,934 ED visits between 2009 to 2014 where patients had a CT scan with or without contrast, or no scan at all. Data show rates of AKI were similar among all groups and that contrast administration was not associated with increased incidence of chronic kidney disease, dialysis or renal transplant at six months. The study also showed clinicians were less likely to prescribe contrast to patients with decreased renal function and more likely to prescribe intravenous fluids if contrast was administered.

A meta-analysis of articles containing data on 107,335 patients, published in 2018, showed no significant differences in outcomes between patients receiving contrast-enhanced CT versus non-contrast CT.[5] The study concluded patient- and illness-level factors were likely the cause of kidney injury, not the use of contrast agents.

Improvements in CT scanner technology have increased the anatomical area that can be scanned in a single gantry rotation. This has allowed for visualization of the entire heart in one heartbeat, which allows for a very low contrast volume for precisely timed contrast enhancement.[6] Timing is crucial for optimal visualization, which will lead to ongoing improvements in contrast media injection protocols and CT scanner settings.

"We believe that on the bases of indication, for evaluation of vascular structures, a scout can provide scan length, and a test-bolus, scan duration, automatic selection of tube current and potential will have more influence on an individual amount of iodine contrast volume and concentration to minimize both radiation exposure and amount of iodine," predicted Brian Ghoshhajra, M.D., MBA, cardiac MR PET CT program, Massachusetts General Hospital, in a 2017 article "Advances in Cardiac CT Contrast Injection and Acquisition Protocols."[6]

He and co-author Jan-Erik Scholtz, M.D., said the most important patient-related factors in the amount of iodine used in CCTA are body size and cardiac output. Ideally, they said iodine amounts should be calculated using the patient’s body habitus, based on weight or body surface area. However, most cardiac CT studies use a consistent amount of contrast media because it is much easier to handle in clinical care.

They explained cardiac output affects contrast timing, resulting in slower arrival of the contrast bolus and a delayed enhancement when cardiac output is low.[7,8] Sub-second acquisitions require precise scan timing for optimal opacification, at least of the left cardiac chambers, ascending aorta and coronary arteries. They said knowledge of scan delay is crucial and needs to be determined for each patient. Optimal intravascular enhancement in coronary CTA is customarily considered between 250 and 300 Hounsfield Units (HU) to allow optimal differentiation of low-density coronary artery atherosclerotic lesions (approximately 40 HU), intermediate fibrous plaques (approximately 90 HU) and calcified plaques with greater than 130 HU.[9-12]

Use of Low Tube Voltage Scans

Scholtz and Ghoshhajra wrote in their research that low kVp scans, combined with interactive reconstruction, also can help reduce iodine contrast doses, which can replicate the same image quality as a 120-kVp scan in regard to image noise and contrast.[14]

Low kV acquisitions are one of two major technical advances that had a major impact on contrast media injection lower dose protocols, noted by doctors Carlo N. De Cecco, M.D., Ph.D., and Joseph Schoepf, M.D., both radiologists in the Division of Cardiovascular Imaging, Department of Radiology and Radiological Science, at the Medical University of South Carolina, Charleston, S.C.[18] They said the second significant innovation has been the development of dual-energy CT.

Spectral CT, also known as dual-energy CT, also has the potential to lower CT contrast dose use. It has the ability to create virtual mono-energetic imaging at low keV levels.

Dual-energy CT allows the differentiation and quantification of material composition using two attenuation measurements acquired at different energy levels, noted Cecco and Schoepf in their research.[18] They said a unique feature of dual-energy CT is the possibility of generating datasets of virtual monoenergetic images at specific X-ray beam energies (keV). High keV levels produce less image noise, while low energy levels, approaching the k-edge of iodine, have increased amounts of image noise and have higher contrast resolution. The highest contrast-to-noise ratio (CNR) obtained with virtual monoenergetic images is reached with a beam energy of 70 keV.[19] But, they said with noise-optimizing image reconstruction algorithms, this can now be achieved at even lower energy levels of 40–50 keV.[19] This means the amount of contrast media required for a diagnostic image can be reduced while lowering the keV levels.

Each vendor has developed its own approach to produce dual-energy imaging datasets. These variations include:
• Dual-source CT scanners, equipped with two X-ray tubes operating at low and high voltages.[20]
• Single-source, rapid kV-switching CT scanners, where a single X-ray tube alternates high and low tube potentials during the scan.[21]
• Single-source CT scanners equipped with dual-layer scintillating detectors, where the inner detector layer collects the low-energy data while the high-energy data are collected by the outer layer.[22]

To get a handle on the current contrast dose levels used at a hospital, and to correlate dose and contrast type with patients who suffer what is believed to be resulting kidney damage, the data for each contrast use first needs to be collected. There is a lack of consistency when it comes to how imaging departments record contrast dose. Some record dose, some record dose plus the type of contrast, some just record the scan as a contrast exam with no further information. With increasing concern over CIN and possible links between health issues and MRI gadolinium contrast agents, a couple vendors now offer digital contrast media injection management solutions to record all the information related to any contrast administration. This information can be added to patient electronic medical records (EMRs).