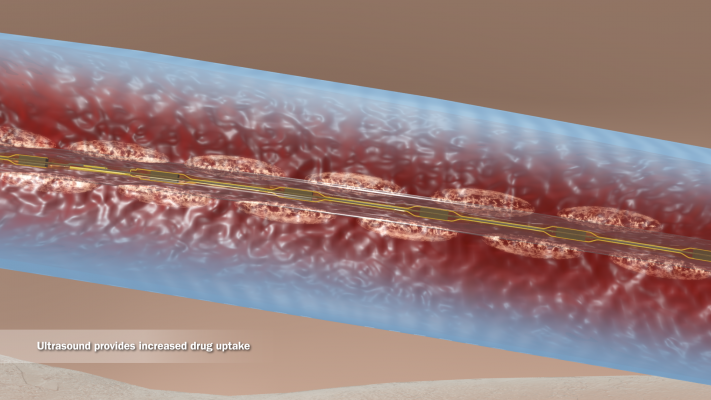 The Ekos catheter was recently cleared by the FDA to aid in infusion and in breaking down pulmonary emboli faster than traditional lytic treatment alone.

Acute intermediate-risk pulmonary emboli (PE) in normotensive patients with right ventricle dysfunction present the clinician with a quandary. With a 3 percent mortality rate[1] — just shy of the mortality rate of acute myocardial infarction — acute intermediate-risk PE warrants therapy that will rapidly reduce right ventricular strain and pulmonary artery pressure. Systemic lytics, with a 2 to 3 percent[2] risk of catastrophic intracranial bleeding, has a major complication rate equal to the overall mortality of the disease. Yet standard anticoagulation often acts too slowly, achieving full efficacy in responsive patients over the course of weeks or even months. In fact, the recent PEITHO trial demonstrated a 5 percent need for rescue thrombolysis among patients receiving anticoagulation alone.

Ultrasound-assisted catheter-directed low-dose thrombolysis (using the EkoSonic endovascular system) delivers the efficacy of systemic lytics by quickly reducing right ventricular afterload and improving right ventricle size and function, but with the lower risk profile comparable to anticoagulants alone. The 50-plus patients with acute intermediate-risk PEs that I’ve treated with the EkoSonic technology have had an average reduction in pulmonary artery systolic pressure of nearly 12 mmHg within 16 hours of the onset of therapy. Most notably, the safety profile has been outstanding. I’ve treated post-partum women, patients with widely metastatic cancer, businessmen just stepping off the plane and certain post-operative patients. Particularly dramatic was the use of the technology in a professional in his late 40s, who developed a PE flying back from Japan to the East Coast. Initially suspecting that a virus was making him feel lousy, he waited a few days before getting a computed tomography (CT) scan, during which he collapsed and had to be resuscitated. Six hours after being treated with EkoSonic for a bilateral PE, he was sitting up in bed, phone in hand, telling his friends, “You’ll never guess where I am.”

Watch a VIDEO demonstration of the Ekos system.

Better Initial Action Than Anticoagulation, but Just as Safe

All early clinical trial data have demonstrated the efficacy and safety of ultrasound-assisted catheter-directed low-dose thrombolysis. The ULTIMA trial, published in Circulation[3], randomized 59 patients with intermediate-risk PE to unfractionated heparin and low-dose ultrasound-assisted catheter-directed thrombolysis (USAT) or to unfractionated heparin alone. The mean decrease in right ventricular/left ventricular (RV/LV) ratio from baseline to 24 hours was a substantial 0.3 ± 0.2 in the USAT group versus a non-significant reduction of 0.03 ± 0.16 in the heparin alone group. In this population, there was no evidence of major bleeding in the USAT group.

The SEATTLE II study[4], a prospective multicenter trial, evaluated the safety and efficacy of ultrasound-facilitated catheter-directed low-dose thrombolysis in 150 patients with acute massive or submassive PE. The mean RV/LV ratio in study participants decreased from 1.55 pre-procedure to 1.13 on average at 48 hours post-procedure, a statistically significant and substantial difference of 0.42, according to results presented at the 2014 American College of Cardiology (ACC) scientific sessions. Though an anatomic finding, it suggests the technology rapidly relieved pulmonary artery obstruction and reduced pulmonary hypertension. The true value of the SEATTLE II study, however, was a closer look at the safety profile of low-dose lytic administration in the setting of an invasive procedure. Importantly, there were no cases of intracranial hemorrhage and a low rate of GUSTO major bleeding, which is consistent with my own experience with the technology. Our patients have had a GUSTO major bleeding risk of 1 to 2 percent, which has predominantly meant stopping the therapy early and transitioning back to anticoagulation alone. One post-operative patient required a transfusion.

One of the novel aspects of the EkoSonic system is the concomitant ultrasound administration. This aspect of the technology is based on ample in vitro data that suggest ultrasound energy, similar to that emitted by the EkoSonic system, imparts unwinding of fibrin strands, making the thrombus more permeable and allowing the lytic to penetrate deeper and simultaneously accelerating dispersion of the lytic. According to a 1995 study[5], drug uptake improved by 84 percent in two hours, achieving efficacy at one-fifth the systemic lytic dose — a total of 20 mg tPA compared to the standard 100 mg for systemic thrombolysis.

Procedure is Quick and Easy to Master

After receiving initial anticoagulation, a patient is brought to the cath lab for a standard right heart catheterization. We measure pulmonary artery systolic pressure first and then define the location of the thrombi with bilateral pulmonary angiograms using a 5 French pigtail catheter and power injection of contrast. These images serve as a roadmap for placing the EkoSonic devices across the largest thrombi. The thrombus burden and location also determine whether we use one or two infusion devices. When using two devices, we use the Bard Duo 12 French catheter from the right internal jugular vein; otherwise a standard 6 French sidearm sheath is sufficient for a single infusion catheter. We advance the EkoSonic infusion catheter(s) over a standard 0.035-inch guidewire and across the treatment site. The guidewire is removed, and the ultrasound core is inserted into the infusion catheter.

We prime the infusion catheter(s) with a 2 mg bolus of alteplase per strand before connecting them into the control unit to activate the high-frequency, low-power ultrasound core. In the ICU, the patient receives a slow infusion of alteplase — between 0.5 mg and 2 mg per hour — for a total dose of 20 mg of tPA. The patient also receives half-dose heparin, with an aim to achieve a partial thromboplastin time (PTT) of 40 to 60 seconds during the procedure. Post-treatment, the infusion catheters are removed at the bedside, leaving the delivery sheath in place through which we measure the patient’s pulmonary artery systolic pressure and then remove the catheters entirely. Repeat pulmonary angiography is not routinely required. Afterwards, the patient receives full-strength heparin for a goal PTT of 60-80 and is transitioned to an oral anticoagulation regimen for long-term therapy.

It should be noted that we do not offer this procedure to patients who have had a documented PE or symptoms consistent with PE for greater than two weeks, so education for patients and referring physicians is critical to timely treatment.

Ultrasound-accelerated thrombolysis plays an important role in treating patients with acute intermediate-risk PE at high risk of hemodynamic collapse. Specifically we have been treating patients with evidence of right ventricular dysfunction, either in the form of right ventricular enlargement (a diastolic sub-annular cross section greater than that of the left ventricle) or in patients who have positive cardiac biomarkers. Ultimately, this can end up representing a lot of patients — the seminal ICOPER trial suggests intermediate-risk PE accounts for about 40 percent of the population of all people with diagnosed PE.[6]

Although ultrasound-accelerated thrombolysis provides a very rapid therapeutic effect, which may be helpful for treating the acute process, we need to track longer-term clinical outcomes, such as exercise tolerance and pulmonary hypertension and quality life measurements[7] one year post-procedure. Early treatment may help prevent long-term pulmonary vascular remodeling and pulmonary hypertension — particularly in the setting of exercise[8] — but this has not been proven with low-dose lytic therapy using the EkoSonic technology. It makes intuitive sense that early, effective treatment of intermediate-risk PE is advantageous to slower treatment efficacy in terms of reducing late sequelae similar to treating deep vein thrombosis (DVT) aggressively in order to prevent postthrombotic syndrome in the leg. However, it remains unclear just how early is early enough.

In the ULTIMA trial, patients in the EkoSonic arm had superior outcomes to those on heparin alone immediately after the procedure. But by 90 days, outcomes in the two groups were similar. A larger study is warranted to confirm that early resolution of elevated right ventricular afterload and consequent right ventricular dysfunction from pulmonary emboli is as important as we think it is.

Editor’s note: James M. McCabe, M.D., FACC, is an assistant professor of medicine at University of Washington in Seattle. He completed his interventional cardiology fellowship as well as an advanced interventional fellowship in structural and peripheral interventions at Brigham and Women's Hospital/Harvard Medical School. McCabe is a management committee member of the Cardiovascular Outcomes Assessment Program, the Washington state public reporting agency for percutaneous coronary interventions. He received the American College of Cardiology’s National Young Author Award and was a finalist for the American Heart Association’s Laennec Young Clinician Award. McCabe has no conflicts to disclose.