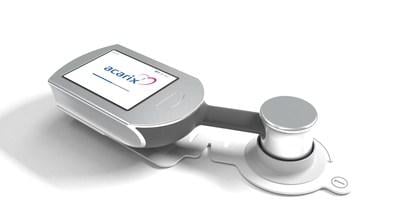 March 30, 2017 — Acarix AB recently announced the results from a new multi-center trial of its handheld CADScor System for non-invasive, non-radiation acoustic detection of coronary artery disease (CAD). The results were presented at the American College of Cardiology (ACC) 2017 Annual Scientific Meeting, held March 17-19 in Washington, D.C., and showed the handheld CADScor System rules out CAD with 97 percent negative predictive value. The results confirm the company’s previously announced figures which, prior to this study, were unconfirmed.

The trial involved 1,675 patients from two Danish hospitals with a low to intermediate likelihood of CAD referred for cardiac computed tomography angiography (CTA) and showed that the handheld CADScor System rules out CAD with 97 percent negative predictive value. Acarix believes this opens the possibility of use as a frontline test, reducing patient anxiety and waiting times, as well as improving triage for patients needing more expensive and invasive diagnostic modalities.

The system combines acoustic detection of turbulent arterial flow and myocardial movement with advanced algorithms in a handheld device to provide a patient-specific CAD score in less than 10 minutes. The research was led by Principal Investigator Morten Böttcher, M.D., Ph.D., FESC, and by Simon Winther, M.D., Ph.D., Department of Cardiology, Aarhus University Hospital, Denmark. “Despite the availability of improved risk stratification algorithms, the incidence of normal investigations such as nuclear or CT imaging remains high. We therefore tested the diagnostic accuracy of the CADScor System for ruling out CAD to see if it could be used to reduce demand for more advanced diagnostic modalities. We have concluded that, with its ability to rule out CAD with a 97 percent negative predictive value, this advanced, easy to use, stethoscope like device could indeed be deployed as a frontline test,” they said.

A CAD-score was recorded in all 1,675 patients enrolled in the trial, with the CAD-score algorithm including both acoustic features and clinical risk factors (gender, age and hypertension). Low risk was indicated by a CAD-score value less or equal to 20. The algorithm CAD-score version 3 was developed using recordings from 711 patients from previous studies and a training cohort of 589 patients from the present study. The remaining 1,086 patients were used as the validation cohort. The CAD-score was successfully analyzed in 1,464 patients (87 percent). Hemodynamic-significant CAD was present in 134 patients (9.3 percent). There were no differences in the performance of the CAD-score algorithm in the training vs. validation cohorts. In the entire cohort, the CAD-score differed between coronary artery calcium score (CACS) groups CACS=0 (n=745), CACS 1-400 (n=550) and CACS more than 400 (n=142); CAD-score: 17 ±11, 24 ±12, and 30 ±12 (p less than 0.001). CAD-score was also significantly lower for patients without vs. with hemodynamic-significant stenosis 20 ±12 vs 30 ±12 (p less than 0.001). Diagnostic performance evaluated by receiver operating characteristic curve showed an accuracy of: 72 percent (CI: 67-77 percent). CAD-score cut-off less or equal to 20 had an accuracy of: