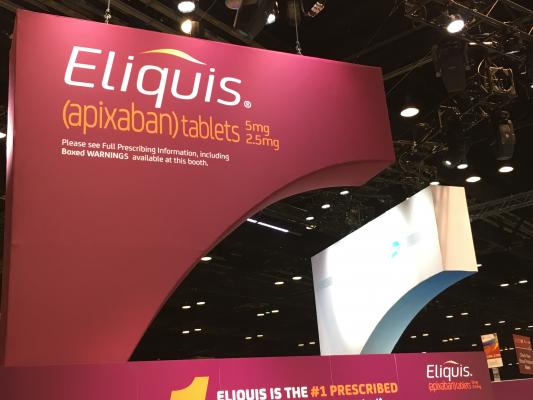 These data were featured as a late-breaking oral presentation at the American College of Cardiology’s (ACC) 68th Annual Scientific Session 2019, March 16-18 in New Orleans and simultaneously published in the New England Journal of Medicine.1

Independent of the Eliquis versus VKA comparison, results also showed that in patients receiving a P2Y12 inhibitor and an anticoagulant, the proportion of patients with major or CRNM bleeding at six months was significantly higher for those receiving aspirin compared to those receiving placebo (16.1 percent vs. 9 percent, respectively; HR: 1.89, 95 percent CI: 1.59-2.24; p<0.001).

Atrial fibrillation is the most common arrhythmia in the world, affecting an estimated 33 million people in 2010.2 It is estimated that approximately 20-to-30 percent of people with atrial fibrillation also have concomitant coronary artery disease,3,4 which may result in ACS or require PCI. Additionally, 5-10 percent of patients who undergo PCI have atrial fibrillation.5,6,7,8 While oral anticoagulants and dual antiplatelet therapy help reduce the risk of stroke and recurrent ischemic events, respectively, the combination leads to an increased risk of bleeding. Therefore, additional research has been needed to help inform antithrombotic regimens available for these high-risk patients.