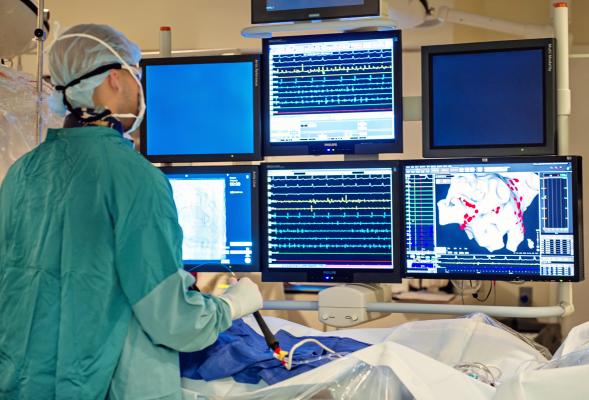 November 14, 2016 — Atrial fibrillation patients with a prior history of stroke who undergo catheter ablation lower their long-term risk of a recurrent stroke by 50 percent, according to new research from the Intermountain Medical Center Heart Institute.

Atrial fibrillation is an abnormal heart rhythm caused by rogue electrical currents in the heart. The arrhythmia allows blood to pool and clot in the heart. When the clot breaks loose, it travels to the brain and causes a stroke.

When medications are not successful in treating the arrhythmia, catheter ablations are used to create scar tissue in the upper left atrium of the heart that prevents rapid, chaotic electric currents, often from the pulmonary veins, from causing the abnormal rhythm.

“One of the most devastating complications of atrial fibrillation is a stroke and its prevention is the treatment cornerstone of the abnormal heart rhythm,” said Jared Bunch, M.D., lead author of the study and director of electrophysiology at the Intermountain Medical Center Heart Institute in Salt Lake City. “Patients that have a prior history of stroke have a much greater risk of recurrent strokes. Our new research shows the more successful we are in treating the abnormal rhythm through the process required with catheter ablation, the better chance we have of lowering a patient’s long-term risk of stroke.”

Results of the study were presented during the American Heart Association’s Scientific Sessions, Nov. 12-16 in New Orleans.

The Intermountain study compared a group of 140 patients, who had a prior history of stroke and underwent their first catheter ablation, to two other patient groups, both of which also had a prior history of stroke, including 416 atrial fibrillation patients who did not receive a catheter ablation, and 416 stroke patients who did not have atrial fibrillation.

The patients were followed for five years and observed for recurrent outcomes of stroke, heart failure and death.

“One of the most important findings of this study was that stroke rates in patients that underwent an ablation were similar to patients with no history of atrial fibrillation. This suggests that our management approach can alter some of the negative effects and natural history of atrial fibrillation. As physicians, we spend a lot of our time and energy trying to prevent stroke. This study helps us understand better how our management approaches can alter stroke risk,” said Bunch. “Our research shows that more aggressive treatment of atrial fibrillation by using catheter ablations will reduce the chances a person will have a life-threatening stroke.”