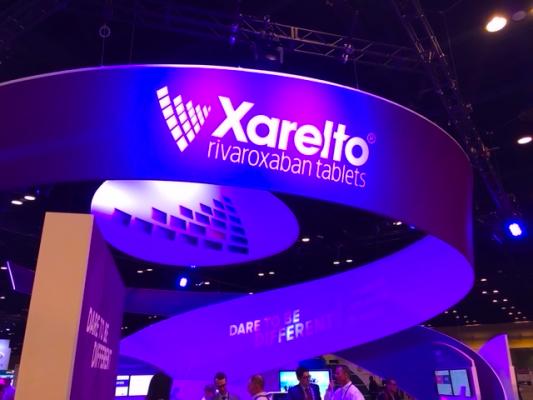 The Xarelto booth at the 2018 American College of Cardiology meeting.

Additionally, COMPASS researchers confirmed the importance of preventing MALE in patients with PAD, noting the correlation between MALE and amputations, death and hospitalizations. Of note, MALE was associated with a three-fold increase in death and a 200-fold increase in amputation.

The COMPASS PAD analysis also identified several factors that were predictors of MALE in patients: prior revascularization (peripheral surgery or angioplasty), prior limb amputation, critical limb ischemia or randomization to aspirin therapy in the trial.

"This analysis reinforces the potential clinical benefit of Xarelto in this population and may offer additional insight into how physicians manage patients with PAD in the future,” said Dr. Peter DiBattiste, global development head, cardiovascular, Janssen Research and Development.

PAD affects 10 million Americans and can signal that a more serious cardiovascular (CV) event, like heart attack or stroke, may occur. Untreated PAD may also lead to MALE, or severe limb ischemia, where blockage in the arteries of the lower extremities markedly reduces blood-flow.

Rivaroxaban is the only factor Xa inhibitor to be investigated in PAD and coronary artery disease (CAD).

The COMPASS study was stopped about a year ahead of schedule due to efficacy, and primary results were published in The New England Journal of Medicine and presented at the 2017 ESC Congress.

For more information on late-breakering news at ACC.18, find links to stories at ACC 2018 Late-Breaking Trials.