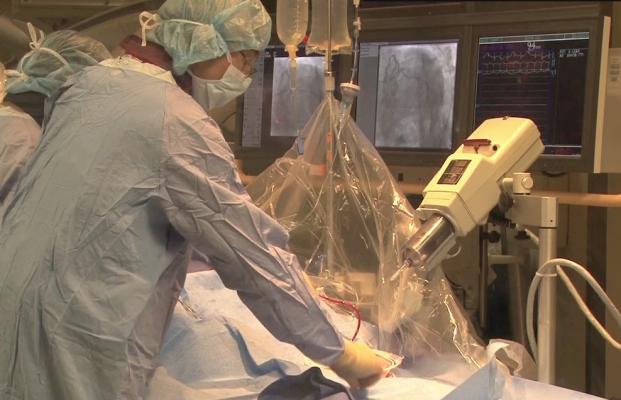 April 18, 2016 — Delayed or deferred stent implantation in patients showed no clinical benefit in patients experiencing the deadliest form of heart attack, ST-segment elevation myocardial infarction (STEMI), according to research presented at the American College of Cardiology’s 65th Annual Scientific Session (ACC.16). Researchers noted delayed or deferred implantation failed to reduce death from any cause, hospitalization for heart failure, subsequent heart attacks or the need for a repeat procedure to restore blood flow to the heart.

“The take-home message from this study is that deferred stent implantation cannot be recommended as a routine procedure for STEMI patients treated with primary percutaneous coronary intervention,” said Henning Kelbaek, M.D., of Roskilde Hospital, University of Copenhagen, Denmark, and lead author of the study. “Our results completely rebut the promising findings of preliminary studies that suggested deferred stenting should translate to clinical benefit.”

STEMI is a severe form of heart attack caused by prolonged blockage of blood supply in the heart. It requires immediate angioplasty, a non-surgical procedure in which a balloon is fed into the blood vessels through a catheter and inflated to open narrowed or blocked arteries, allowing blood to flow. A stent is usually placed at the blockage site to keep the artery open. In the United States, about 250,000 people experience a STEMI every year.

After the blocked artery is opened, the blockage site often contains residual blood clots that may, when the stent is implanted, be displaced downstream into the small branches of the artery. If this happens, it can damage heart muscle and block small blood vessels. Previous small studies suggested that delaying stent implantation for a period of time ranging from several hours to several days after reopening the artery might reduce the risk of blood-flow disturbance. The thinking was that medication given during the delay might allow the residual blood clots to diminish, reducing the risk of a displaced clot damaging the small branches of the artery. The DANAMI-3-DEFER trial was the largest trial yet conducted to evaluate whether delaying stent implantation would improve patients' survival and reduce their risk of heart failure or another heart attack.

In the trial, which took place in Denmark, 1,234 patients (average age 61; 75 percent male) with acute STEMI symptoms of less than 12 hours’ duration were randomly assigned to receive standard angioplasty with immediate stent implantation or angioplasty followed by stent implantation after a re-examination 24 to 48 hours later. After an average follow-up time of 43 months, 105 patients or 17 percent in the DEFER group and 109 or 18 percent in the standard treatment group met the primary endpoint, a composite of death from any cause, hospitalization for heart failure, a second heart attack and unplanned repeat angioplasty, a nonsignificant difference.

Although the trial was the largest so far to address the issue of delayed stent implantation, it may not have been large enough to detect a difference between the two treatment groups, Kelbaek said. Another limitation is that the trial did not select patients who were at the highest risk for developing another arterial blockage, such as those over age 65, those who have had more than one heart attack or those known to have a large number of blood clots.

“We cannot rule out that a fraction of our patients who met these criteria might have benefitted from delayed stent placement, especially because we found a small improvement in heart-muscle function 18 months after treatment among patients who underwent deferred stenting,” Kelbaek said.

The study was not powered to detect this improvement, but Kelbaek said he and his team would now look carefully for possible “hypothesis-generating” findings in subsets of patients –– both those who might have benefitted from the deferred-treatment strategy and, equally important, those in whom this strategy might have worsened their condition.

The DANAMI-3-DEFER trial was funded by the Danish Agency for Science, Technology and Innovation and Danish Council for Strategic Research.

This study was simultaneously published online in The Lancet at the time of presentation.