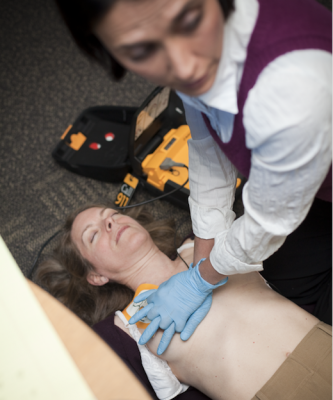 May 16, 2018 — A new study shows that women exposed to particular matter (PM) and lower temperatures for even a short amount of time are at an increased risk of sudden cardiac death (SCD). PM is a mixture of hazardous, small particle pollutants that includes dust, pollen, soot, smoke and liquid droplets that get into the air. The study is the largest of its kind in the United States to date and was presented at Heart Rhythm 2018, the Heart Rhythm Society's 39th Annual Scientific Sessions.

Sudden cardiac arrest (SCA) occurs when the heart stops beating, abruptly and without warning. If this happens, blood stops flowing to the brain and other vital organs. If the heartbeat is not restored with an electrical shock immediately, SCD follows within minutes. According to the Heart Rhythm Society, approximately 325,000 incidences of SCD happen in adults each year, and it is one of the leading causes of death in the U.S. SCA claims one life every 90 seconds, taking more lives each year than breast cancer, lung cancer or AIDS.

The study evaluated 112,700 women in the Nurses' Health Study, an ongoing study that began in 1976. Daily exposures to PM less than 2.5 microns in diameter (PM2.5) and mean temperatures were determined at the home address of each participant. For each SCD case, the exposure to PM on the day of SCD was compared to that on control days matched on the day of the week and selected from the same month as the case day.

There were 221 SCDs identified between 1999-2011. Findings indicated increased exposures to PM were associated with a suggestive linear increase in SCD risk. The association was significantly modified by ambient temperature. SCD was associated with PM in the lowest quartiles of temperature (below 39.03 F°), but no associations were observed at higher temperatures (ranging from 54.66-68.91°F). Of note, all PM2.5 exposures in this study were far below the current daily U.S. Environmental Protection Agency (EPA) standard for PM2.5 (35 µg/m3).

"Before this study, the relationship between short-term exposure to air pollution and sudden cardiac death was not known, especially within the lower-risk, general population. Our study demonstrates that even a small amount of air pollution on colder days could put people at risk," explained lead author Jaime Hart, SCD, assistant professor at Channing Division of Network Medicine, Brigham and Women's Hospital and Harvard Medical School. "To reduce exposures, people who don't live with smokers should try to keep their windows closed and minimize outdoor activities on cold days and to be aware of pollution levels in the air. We hope our results will raise awareness of air pollution as a risk factor and potentially lead to a review of EPA standards, to ultimately, help reduce the number of sudden cardiac death cases."

The authors note that future studies are warranted to further understand the cause of this linear relationship of air pollution and SCD and to see if it is observed in other populations, including men.

Read about Hart's related research on air pollution and cardiovascular disease and how the combination increased risk for women with diabetes.