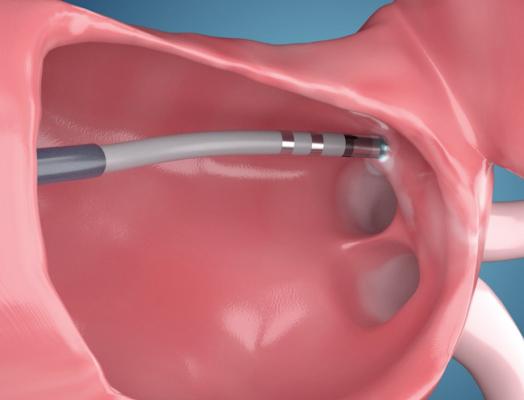 The DTA system is a temperature-controlled open-irrigated RF ablation system designed to deliver RF energy during cardiac electrophysiology (EP) ablations. The DTA system delivers real-time feedback on physical parameters, which can guide physicians as the lesion is being produced.

The DTA catheter is embedded with industrial-grade diamonds, which have 200-400 times greater thermal conductivity when compared to materials used in conventional RF ablation catheters.[1] This thermal conductivity enables a low irrigation flow-rate, and accurate real-time measurements of tissue temperature, resulting in more efficient energy delivery.[2] As the only open-irrigated RF catheter with industrial diamonds to optimize power based on tissue temperature, the DTA system is safe and effective and has demonstrated procedural efficiencies when compared to conventional contact force-sensing RF catheters.[3]

Additionally, the DTA catheter is specially designed for recording of high-resolution electrogram (EGM) signals.[3] Physicians can use these clear EGM signals as a physical indicator of lesion formation, as well as guidance for ablation location.

"With the FDA approval of the DiamondTemp system, Medtronic continues to drive clinical research and innovation to find differentiated solutions that meet the needs of patients and clinicians, who are on the front lines of patient care," said Rebecca Seidel, president of Cardiac Ablation Solutions, which is reported as part of the Cardiac and Vascular Group at Medtronic. "DTA is the only FDA-approved, temperature-controlled, irrigated RF ablation system on the market today. The addition of DTA will enable Medtronic to continue to expand our portfolio in new ways with cutting edge arrythmia solutions to help patients control their AF."

The DIAMOND-AF trial is a prospective, multicenter, single blind, non-inferiority, randomized, controlled trial designed to compare the safety and effectiveness of the DTA system against a contact force-sensing ablation system (control arm) for the treatment of patients with recurrent, symptomatic, paroxysmal atrial fibrillation (PAF) whose condition is unresponsive to drug therapy.[4] The trial enrolled 482 patients (239 DTA, 243 control) across 23 sites in the United States, Europe and Canada. DIAMOND-AF is the largest completed AF ablation technology IDE trial which resulted in FDA approval to date.

Additionally, the DTA system demonstrated procedural advantages compared to the control group, with shorter total RF times and individual RF ablation duration, and reduction in volume of infused saline. A clinically meaningful quality-of-life improvement was also observed in both arms at 6 and 12-months post-ablation. These findings were presented as a late-breaking clinical trial at the 2020 Asia Pacific Heart Rhythm Society (APHRS) Virtual Congress in October and were published in the Journals of the American College of Cardiology Clinical Electrophysiology (JACC EP) in January 2021.

"The DIAMOND-AF trial results are encouraging not only because the DTA system was shown to be safe and effective, but because the outcomes underscored significant procedural efficiencies for clinicians," said JACC EP corresponding author Tom McElderry, M.D., University of Alabama, Birmingham. "Improved efficiencies – including shorter total RF ablation times and individual RF ablation durations, are important for both the well-being of the patient and the productivity of the physician and lab staff."

The full manuscript of the DIAMOND-AF trial can be found here.

Impact of Atrial Fibrillation in the U.S. and How Ablation Therapy Works

Atrial fibrillation is the most common heart rhythm disorder affecting nearly six million people in the U.S.[5] and more than 37 million people worldwide.[6] The disease involves irregular quivering or rapid heart rhythms in the upper chambers (atria) of the heart. AF ablation is a safe and effective treatment to reduce symptoms and improve quality of life.[7]

AF ablation using radiofrequency energy is a minimally invasive approach that aims to create lesions (scar tissue), using heat, to interrupt irregular electrical signals in the heart, a procedure known as pulmonary vein isolation (PVI). Since the pulmonary veins are often a major source of the arrhythmia, PVI via catheter ablation remains the cornerstone treatment for AF patients who are unresponsive to drug therapy.[7]