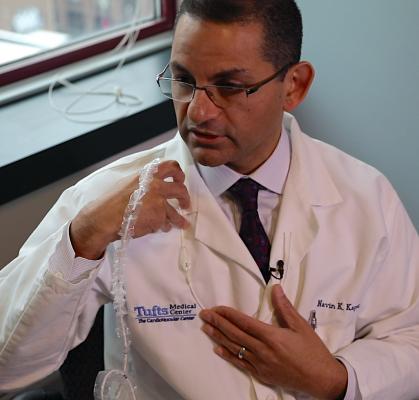 The FDA's Breakthrough Device Program was established for medical technologies that have the potential to provide more effective treatment or diagnosis of life threatening diseases or conditions. The program provides preCardia with priority review and engagement with FDA experts from the beginning of the premarket review phase through commercialization decisions. In addition, the Centers for Medicare and Medicaid Services (CMS) has created an alternative new technology add-on payment pathway for technologies that have been granted a breakthrough device designation.

The preCARDIA system is intended to rapidly and effectively reduce congestion in the venous system, known as cardiac preload, thereby improving overall cardio-renal function. The device uses a balloon catheter and pump controller that allows intermittent occlusion of the superior vena cava (SVC). The potential benefits for patients include improved response to medical management, reducing rehospitalizations, and improved quality of life. The system is currently under investigation in the VENUS-HF Early Feasibility Study.

"By occluding the superior vena cava intermittently, we can reduce cardiac filling pressures and improve cardiac output, and by reducing right atrial pressures in patients overtly congested with heart failure, we believe this has an unloading effect on the kidney, so it is a device that will really help with cardio-renal unloading," Kapur explained.

He said the hope is the device will enable faster decongestion of the patient so they can be discharged faster, decreasing the average length of stay for heart failure admissions.

"preCardia's technology has achieved an important milestone in securing the FDA's Breakthrough Device Designation. We are thrilled to move forward in our collaboration with the FDA, prioritizing our submission reviews and supporting rapid access to this therapy for ADHF patients," said Lisa Wipperman Heine, preCardia president and CEO.

Approximately 1.8 million patients are admitted to hospitals with ADHF in the United States annually[1] and it is the leading cause of hospitalization in patients older than 65 years of age.[2]  Mortality after ADHF hospitalization approaches 30 percent annually and readmission is common, despite available pharmacotherapy and device based heart failure treatments.[1,3]

Most ADHF patients have significant volume overload and congestive symptoms which are strong predictors of outcomes.[4] All current therapeutic approaches are palliative, alleviating some symptoms, however ADHF patients continue to have poor morbidity and mortality outcomes. There remains a need for new therapies focused on providing effective and efficient cardio-renal volume unloading in the ADHF patient population.

The company was founded and incubated by MD Start and is headquartered in St. Paul, Minn.

VIDEO: Occluding the SVC as a Reset Button in Heart Failure — Interview with Navin Kapur, M.D.