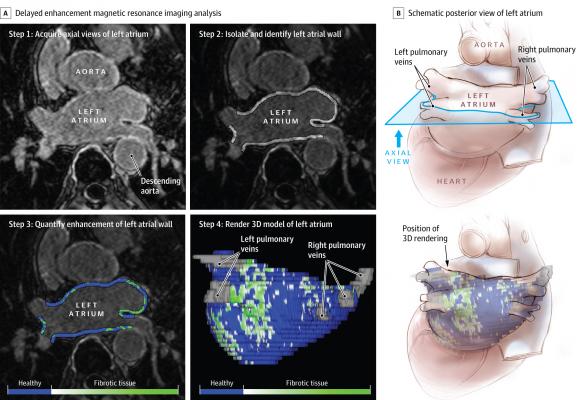 High-resolution 3-D delayed enhancement MRI of the left atrium can be used for quantification of fibrosis based on relative intensity of contrast enhancement The DECAAF study found this may help determine which patients will benefit from fibrosis ablation combined with PVI, and which ones are best served with the PVI.

September 28, 2021 — Image-guided fibrosis ablation in addition to pulmonary vein isolation (PVI) does not improve ablation success rates compared to PVI alone in patients with persistent atrial fibrillation (AF). This was according to the DECAAF II study intention-to-treat analysis presented in a Hot Line session the European Society of Cardiology (ESC) Congress 2021.[1]

However, in the as-treated analyses, covering low-grade atrial fibrosis with ablation lesions led to a significant reduction in atrial arrhythmia recurrence.

All patients underwent late gadolinium enhancement (LGE)-MRI at baseline (before ablation) and approximately three months after. This imaging technique generates a 3D fibrosis map of the left atrium in which diseased or fibrotic tissue is shown in green and healthy tissue is highlighted in blue. Baseline images were used during the procedure in the intervention group to guide ablation of fibrotic tissue – operators were instructed to either cover or encircle the green areas on the images, i.e. the fibrotic tissue, in addition to PVI. Operators in the control group were instructed to only encircle the pulmonary veins, without adding additional lesions.

The three-month MRI evaluated the formation of lesions secondary to ablation. “These unique data provide us with the opportunity to better understand the effect of ablation on the left atrium and what parameters influence the formation of an ablation lesion,” said principal investigator Nassir Marrouche, M.D., of Tulane University School of Medicine, New Orleans.

The median follow-up was 12 months. The intention-to-treat analysis showed no statistically significant difference in the primary endpoint between groups in the total study population. Atrial arrhythmia recurrence occurred in 175 (43%) patients in the intervention group and 188 (46.1%) patients in the control group (hazard ratio [HR] 0.95; 95% confidence interval [CI] 0.77–1.17; p=0.63). In subgroup analyses, a trend was observed towards a lower rate of atrial arrhythmia recurrence in the intervention group for patients with stage I or II fibrosis at baseline.

As-treated analyses examined atrial arrhythmia recurrence according to the proportion of targeted and covered fibrosis (as assessed by the three-month MRI). There was a significant benefit of substrate ablation in patients with stage I or II fibrosis at baseline, with HR 0.839 (95% CI 0.732–0.961; p<0.05) for targeted fibrosis and HR 0.841 (95% CI 0.732–0.968; p<0.05) for covered fibrosis. However, there was no benefit of image-guided fibrosis ablation on atrial arrhythmia recurrence in patients with stage III or IV stage fibrosis at baseline.

The rate of complications, including post-ablation stroke, was higher in the image-guided ablation group but was mainly driven by patients with high levels of fibrosis at baseline.

Disclosures: Marrouche reports having received consulting fees from Biosense Webster, as well as research funding from Abbott. Marrouche also reports having a family member as the CEO of Cardiac Designs.