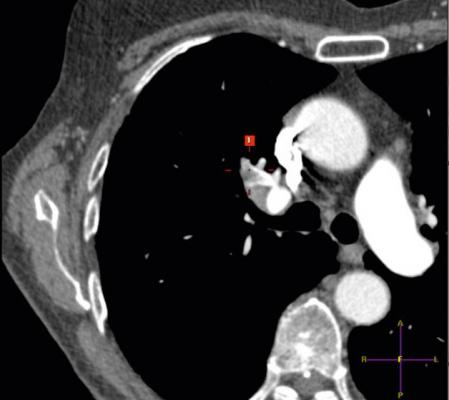 Local doctors had found blood clots in the lungs of Sherry Seals, which would typically be treated with medication that would allow a return to a normal lifestyle. But her chest pain and shortness of breath worsened over time. She was referred to Northwestern Memorial Hospital with a much more serious diagnosis of pulmonary hypertension, a progressively worsening condition where high pressure in the arteries of the lungs can cause failure of the right side of the heart.

Northwestern physicians discovered that despite treatment with medication, the clots in her lungs were not dissolving, leading to a potentially fatal diagnosis of chronic thromboembolic pulmonary hypertension (CTEPH).

Seals had too many clots spread too widely throughout her lungs to safely undergo surgery, the traditional method for removing the clots. At Northwestern, Seals became one of the first patients to undergo a series of BPAs, a novel technique for treating the condition for patients who cannot undergo surgery.

Schimmel, Jr. performed this new technique after training in Japan under the doctor who perfected it.

BPA is similar to coronary angioplasty, a common procedure where a balloon is used to widen blocked or narrow coronary arteries. While Seals was under local anesthetic, Schimmel threaded a narrow tube through the femoral vein in her leg, through the chambers of the heart, to allow staged treatment of the lung arterial segments.

Treatments are performed with various sized balloons ranging from 1.5 to 6 mm in diameter, inflated in the narrow vessels in the lungs to restore them to their normal size. The balloon widens the vessel, restoring blood flow to the lungs and lowering the high pressure in the lungs closer to normal. Contrast dye and X-rays are used to identify the blockage for the physician in real time during the procedure.

Schimmel performed a series of five BPAs on Seals between February and April 2018.

“For the first two procedures, the goal is not to expand the artery to normal, but to get the lung tissue used to seeing blood flow again,” he said. “If the lung tissue sees too much flow too fast, it can create injury. Follow-up procedures are meant to restore the artery to its normal size and return pressure in the lungs to normal. Patients often are not back to normal but start to feel improvement after the second procedure.”

Seals said after the second treatment, she noticed a marked difference in how she felt.

“I didn’t care if this was a new procedure, I just wanted to feel good again,” said Seals. “After each procedure I was breathing a little better.”

Now, Seals and her family are breathing a sigh of relief. She lives on the second floor, and was previously so winded it was difficult to walk to her home. When she previously needed to stop after half a block to catch her breath, she now can walk 12 blocks continuously.

“I can flip through the stairs, jump down, walk up, do it three times in a row if I was allowed to,” Seals said. “I am breathing so much better.”

Schimmel, who is also an assistant professor of medicine – cardiology at Northwestern University Feinberg School of Medicine, said his goal for patients is a return to a “normal quality of life.” His goal for himself and other early adopters of this technique is “to perfect the procedure. Some patients respond well to medication, and there are some new investigational drugs being tested. Other patients are candidates for BPA, but others may need an operation. BPA isn’t the right treatment for everyone, but in some cases it can be a game changer.”

Northwestern Memorial Hospital is the only hospital in Illinois offering BPA as treatment for CTEPH, along with surgical removal of clots, known as pulmonary endarterectomy (PEA), a procedure done by S. Chris Malaisrie, M.D., a cardiac surgeon at Northwestern. Both treatments are offered through Northwestern Medicine’s Pulmonary Vascular Disease Program, the only program in Illinois that has received accreditation from the Pulmonary Hypertension Association (PHA) as a Comprehensive Care Center. That is the highest level of recognition offered to medical centers that treat patients with pulmonary hypertension, a debilitating disease of the lungs that affects the functioning of the heart and can lead to heart failure.

“Northwestern now offers leading-edge treatments for patients with CTEPH including PEA, BPA and pulmonary vasodilators, medications that open narrowed blood vessels,” said Stuart Rich, MD, director of the Pulmonary Vascular Disease Program at Northwestern and a professor of medicine – cardiology at Feinberg. “As our experience has grown, we are beginning to consider combining all three of these approaches in a patient to personalize the treatments for the best outcomes.”