Imaging, not Time, May Determine Eligibility for Stroke Clot Removal 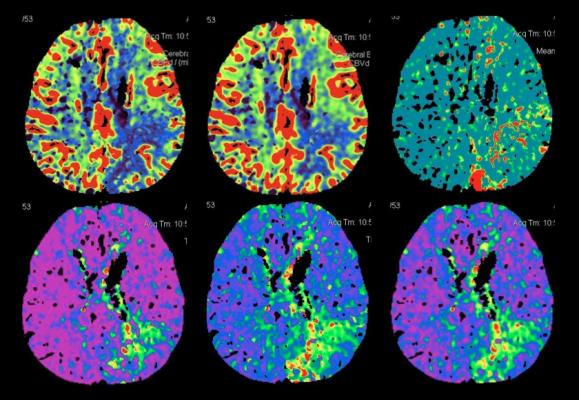 March 4, 2016 — Brain imaging may accurately identify patients likely to benefit from stroke clot removal instead of relying on the time since symptoms began as an indicator of treatment eligibility. The hypothesis was derived from research presented at the American Stroke Association's International Stroke Conference 2016.

An ischemic stroke is caused by lack of blood reaching part of the brain. Endovascular treatment — which mechanically removes the blood clot blocking the path to the brain — benefits patients when performed within six hours of symptom onset. Drug treatment to bust the clot is beneficial up to 4.5 hours.

Here, researchers show that brain imaging can select patients who could benefit from clot removal up to 18 hours after stroke symptoms begin.

Researchers evaluated data on 102 patients who had endovascular therapy up to 18 hours after the start of their stroke and had a computed tomography perfusion (CTP) imaging scan before treatment that showed where a large area of brain tissue may be safely salvaged.

Good recovery — defined as little to no disability — was achieved in 71.4 percent of the patients treated within six hours and 61.7 percent of patients treated beyond six hours of stroke onset. There was no significant association between time to treatment and good outcomes when CT perfusion imaging shows a salvageable brain tissue.

"Using this image-based selection, we would be able to look at any patient who comes through the door to identify the ones likely to benefit from these therapies, regardless of what the clock shows," said Jenny Tsai, M.D., C.M., study author and neuroimaging and vascular neurology fellow at the Stanford Stroke Center. The facility is part of the University of Stanford's School of Medicine in Stanford, Calif.

"This is important because we want to offer the best treatments to every patient who suffers stroke and who may benefit from them. One of the best ways to do this is to have an objective imaging tool to evaluate every single patient," she said.

Researchers analyzed patient data from the clinical study CT Perfusion to predict Response to recanalization in Ischemic Stroke Project (CRISP). The two-year study focused on adults 18 and older and finished in 2014. It was funded by the NIH and conducted at six U.S. medical sites with the goal of developing a practical tool to identify acute stroke patients likely to benefit from endovascular therapy.

"We now have a very effective treatment for the large and disabling acute strokes," Tsai said. "And we know that there are patients likely to benefit from interventional treatments who are not being captured using basic imaging and time criteria alone. We need to do better."

The study was funded by the National Institutes of Health.