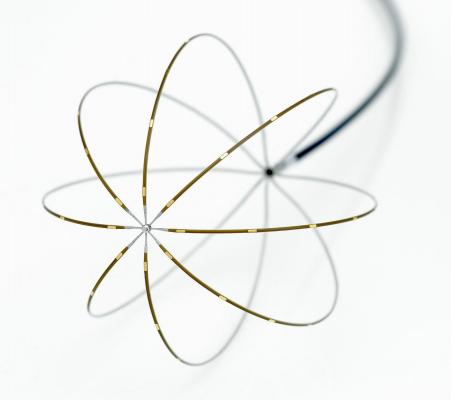 September 2, 2014 – John Muir Health's Concord medical center is the first hospital in Northern California and one of just 20 hospitals in the nation to begin treating patients who suffer from atrial fibrillation (AFib), the most common type of heart arrhythmia, with a new procedure that features the FDA cleared FIRMap Catheter.

A heart arrhythmia refers to the disorganization of the electrical impulses in the heart causing an irregular or rapid beat. AFib is an abnormal heart condition affecting more than 2.5 million Americans (more than the population of San Francisco, San Jose and Oakland combined) and is considered one of the most common arrhythmia problems in adults over the age of 65. Left untreated, atrial fibrillation can lead to serious consequences such as heart failure or stroke.

"To successfully treat AFib, the actual source must be identified, as well as the triggering cells. The exact areas in the upper chamber of the heart responsible for maintaining fibrillation have historically proven to be elusive resulting in a lower success rate than desired and creating frustration for patients and physicians," said Susan Eisenberg, M.D., cardiac rhythm center medical director at John Muir Health. "Using the FIRMap Catheter and 3-D mapping technology, the treatment results are far beyond any medication or surgical procedure previously available. We can now pinpoint the patient-specific source of arrhythmia with accuracy, which is critical as it allows us to address the cause of AFib in a single procedure with a very high rate of success."

"Previously, the treatment options were limited to a one-size fits all approach, which had a much lower success rate and, therefore, would need to be repeated," said Eisenberg. "Undergoing the procedure again is inconvenient for patients, means they still are living with AFib, increases their number of doctor visits and raises health care costs."

"I only recently found out that I had AFib," said Pemberton. "This new treatment technology gives me peace of mind that the source has been found, it has been corrected and I can continue to travel and live my normal life."

The FIRMap catheter, developed by Topera Inc., is an innovative medical device that allows doctors to view specific areas in the heart, which could sustain an arrhythmia. This device, along with a ground-breaking 3-D mapping system, has become essential when performing the progressive procedure known as FIRM Guided ablation, which strives to detect and neutralize the source of electrical impulses or "rotors" disrupting the heart’s normal rhythm. Using this technology, the ablation procedure can target a patient-specific area of the heart, which is critical to that patient’s arrhythmia. The precision of the procedure ultimately aims to diminish recurrence rates among patients, thus generating a major feat in arrhythmia technology today.