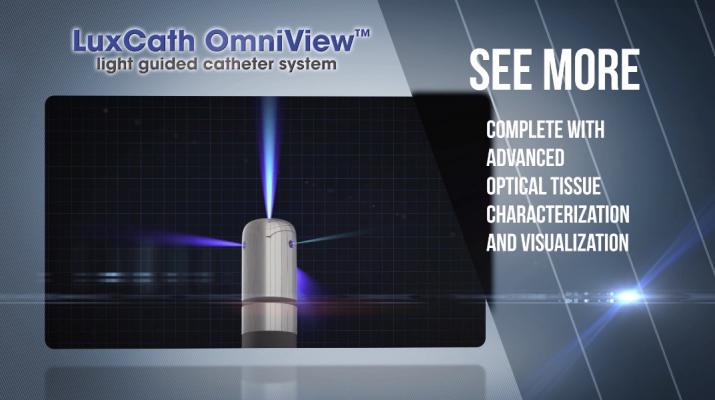 May 22, 2018 — LuxCath LLC showcased the next generation of its proprietary OmniView light-guided catheter ablation system at the 2018 Heart Rhythm Society (HRS) conference, May 9-12 in Boston. The OmniView light-guided ablation catheter is the only technology, according to the company, that can see into tissue during cardiac ablation and assess catheter-tissue contact and lesion progression in real time. This offers electrophysiologists a simple and more definitive end point for lesion quality, increasing the potential for complete and more effective cardiac ablation.

Cardiac ablation is a well-accepted treatment option for cardiac arrhythmias, performed more than 800,000 times every year globally. Currently, electrophysiologists rely on a range of indirect surrogate endpoints, such as temperature, power, duration and contact force, to assess lesion quality during the cardiac ablation procedure. However, these surrogate endpoints have been shown to be variable and potentially unreliable, and they do not directly assess tissue response in real time. Literature has shown single-procedure recurrence rates of 20-40 percent when ablating atrial fibrillation (AF), the most common form of arrhythmia.

The LuxCath OmniView light-guided catheter delivers and couples light into the tissue via an optical fiber embedded in the ablation catheter to assess tissue metabolic activity. The optical signal can be used to assess stability of catheter-tissue contact, tissue composition and lesion formation. The quality of these lesions is critical, as arrhythmia will recur if the lesions are not complete and uniform across the affected tissue. As lesions are formed, natural tissue fluorescence diminishes, indicating tissue destruction. This feedback mechanism allows the electrophysiologist to better assess the quality of the lesion formed. The next generation of the OmniView is orientation-independent, emitting light and seeing in all directions, allowing for optical signals at all angles of tissue contact.

“LuxCath has developed a promising and much needed technology with the OmniView light-guided ablation catheter, which has the potential to improve lesion quality and reduce procedure time while also making the procedure less operator dependent,” said Vivek Reddy, M.D., director of cardiac arrhythmia service for The Mount Sinai Hospital and the Mount Sinai Health System, and a LuxCath scientific advisory board member. “The light-guided technology is designed to signal to the operator when there is stable and consistent tissue contact, which is critical in achieving complete lesions. If the OmniView can deliver on the promise of its approach, light guidance has the potential to be the primary sensory modality in the catheter ablation treatment of AF.”

Separately, the company has announced the establishment of a scientific advisory board, with members including Reddy as well as: