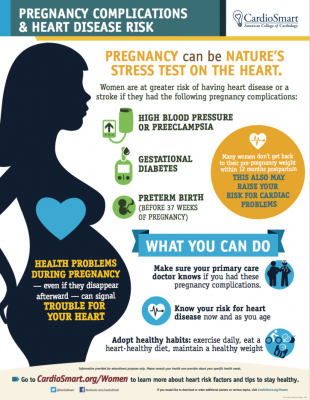 March 15, 2018 — Women diagnosed with preeclampsia during pregnancy were significantly more likely to develop high blood pressure, diabetes or high cholesterol within five years compared with women who did not have preeclampsia, in a study being presented at the American College of Cardiology’s 67th Annual Scientific Session.

The study is among the first to track outcomes following a diagnosis of preeclampsia and bolsters the evidence that preeclampsia contributes to cardiovascular risk factors that were not present before pregnancy. The study, which followed women for five years, also found few women received medical follow-up aimed at preventing cardiovascular problems after preeclampsia.

Preeclampsia is a dangerous condition in which a pregnant woman develops high blood pressure and protein in the urine. Delivering the baby is the only known cure. Symptoms typically resolve within six weeks after delivery, contributing to a perception among care providers and patients that further medical monitoring is unnecessary.

However, previous studies have found women who had preeclampsia during pregnancy face a substantially higher risk of coronary heart disease, stroke and heart failure later in life. These new findings indicate signs of heart disease risk can often emerge in the first few years after a woman experiences preeclampsia.

“As providers, we’re missing the boat if we’re not adequately following up with these patients on their cardiovascular risk factors,” said Karlee Hoffman, D.O., cardiology fellow at Allegheny Health Network and the study’s lead author. “Women are highly motivated to take care of themselves when they are pregnant and after they deliver their babies, so it’s a great time to educate them on long-term cardiovascular risks and potentially intervene with aggressive lifestyle modification.”

Preeclampsia occurs in up to 7 percent of all pregnancies. However, it appears to be on the rise, potentially due to an increase in the number of women becoming pregnant after age 35.

Of those who had a follow-up with a primary care physician after a diagnosis of preeclampsia, only one patient’s chart noted the doctor was aware of the preeclampsia diagnosis and mentioned long-term follow- up with regard to cardiovascular disease.

“The incidence of preeclampsia is relatively high and so is the risk of having a subsequent diagnosis of these cardiovascular risk factors,” Hoffman said. “We need to work with our obstetrics and gynecology colleagues to capture these patients and refer them to a primary care doctor or a cardiologist for more rigorous follow-up to help prevent future cardiovascular disease.”

Although the exact causes are unknown, it is thought that oxidative stress, which results from having too much of the unstable form of oxygen in the body, could play a role in the cardiovascular effects seen after preeclampsia. Oxidative stress has been linked with the physiological changes that contribute to coronary artery disease. To further elucidate the connections between preeclampsia and heart disease, researchers are planning a study that will use echocardiography and noninvasive pulse wave velocity to investigate heart health after preeclampsia.