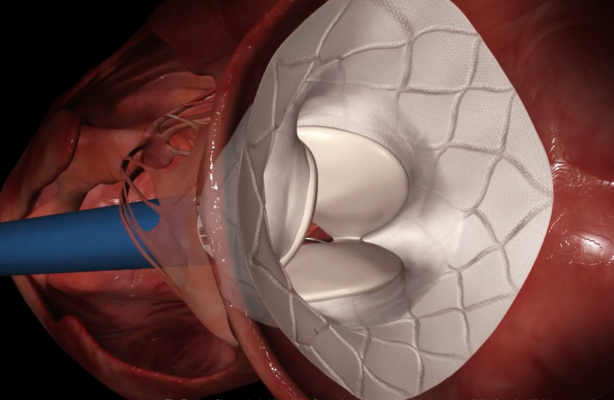 The Tendyne mitral valve being implanted.

January 16, 2017 – In 2015, researchers and physicians at the Minneapolis Heart Institute Foundation (MHIF) were the first in the U.S. to conduct a transcatheter mitral valve replacement using a device from Abbott called the Tendyne Bioprosthetic Mitral Valve. This was part of a study to learn if such a device could help patients with damaged mitral valves who were not good candidates for conventional surgery. At that time, only one size of the device was available, and it was too large for patients with smaller hearts, including some women, because those smaller hearts did not have as much room for the valve. To address this issue, Tendyne developed a modified device, and MHIF recently used it to treat a female patient. MHIF was also the first in the U.S. to implant the new valve in a FDA-approved compassionate care case.

What differentiates the second-generation valve from the first version are subtle changes to the shape and dimensions of the valve's outer sealing frame, making it potentially more viable for patients with smaller hearts. These changes were intended to allow more patients to be treated than was previously possible.

“We were turning away too many patients who weren't able to be treated with the original device,” said Dan Mans, the vice president of clinical and therapy development for Abbott's Tendyne business, the need for the smaller device became clear during the early trials for the first version. “The new version is intended to provide therapy for more patients. Once we developed it, we went back to patients who previously failed the screening and found many could be treated with the new device.”

The principal investigators for the study being conducted at MHIF are Paul Sorajja, M.D., Saeid Farivar, M.D. and Wesley Pedersen, M.D.

“This new less-invasive technology could offer hope for improved quality of life to patients who have very limited options today," Pedersen said. "Transcatheter valve replacement treatment has proven very successful for aortic valve procedures, and we are hoping to see similar success for patients with poorly functioning mitral valves. Having an additional size of valve helps us track results with a larger patient population.” MHIF leads the U.S. in enrollments for the study, having done the most Tendyne implants in the world, with 16 implants completed.

Mitral regurgitation (MR) is a debilitating, progressive and life-threatening disease in which a leaky mitral valve causes a backward flow of blood in the heart. In the U.S., MR affects nearly one in 10 people age 75 and older. These patients often have difficulty with everyday activities, such as climbing stairs, and may require long periods of rest due to fatigue. Left untreated, the condition can raise the risk of irregular heartbeats, stroke, and heart failure, which can be deadly. Medications for the condition are limited to symptom management and do not stop the progression of the disease. Open heart mitral valve surgery is the standard treatment, but many people are not healthy enough to undergo this treatment.