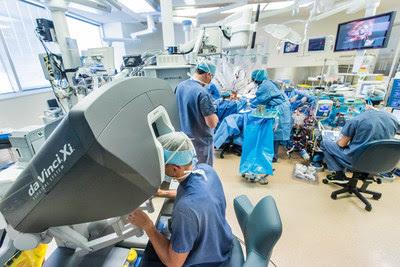 September 22, 2017 — The Montreal Heart Institute (MHI) announced the acquisition of the da Vinci Xi, a new-generation surgical robot, and the first in Canada to be exclusively dedicated to cardiac surgery. "The development of robotic cardiac surgery plays a major role in the expansion of minimally invasive surgery, whose purpose is to minimize the trauma endured by the body by reducing the incision size, for instance", according to the surgical team counting among its members Michel Pellerin, M.D., and Denis Bouchard, M.D., the two cardiac surgeons who performed the first robotic mitral intervention last April. "This new technology will improve the patients' quality of life and allow for a faster return to daily activity, among other benefits", they continued.

The mitral valve repair program was first initiated at the MHI in 1995; back then, the program used a more conventional approach of median sternotomy. More than 2,500 cases were performed using that approach. In 2006, this program evolved to minimally invasive surgery, where a small incision on the right side of the thorax is performed. Approximately 900 surgeries were performed using this innovative approach. Today, in 2017, the evolution of the mitral valve repair program is intrinsically connected to robotic surgery, the ultimate step.

"We need to keep in mind that robotic surgery is an evolving field; the acquisition of this robot will allow us to remain at the spearhead of this type of cardiac surgery", according to Mélanie La Couture, Montreal Heart Institute chief executive officer.

The new da Vinci Xi surgical robotic equipment consists of three main components: a robot acting as remote manipulator, a control console used by the surgeon and an endoscopic vision cart allowing for perfect 3-D visualization. "With this highly sophisticated new technology, our surgeons can now rely on better-performing instruments to have more precise hand gestures and an enhanced view thanks to 3D visualization", continued Louis P. Perrault, M.D., Ph.D, head of the Department of Cardiac Surgery at MHI. Since the surgeon is in permanent control of the robot, this is robot-assisted cardiac surgery.

The acquisition of this robot was made possible thanks to the generous donors of the Montreal Heart Institute Foundation.