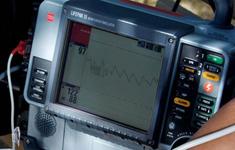 Physio-Control was granted CE-mark in January 2009, certifying compliance with the European Union Medical Device Directive and began its U.S. market release of the LIFEPAK 15 monitor/defibrillator in March 2009.

The LIFEPAK 15 provides the widest range of energy dosing up to 360 joules, and the broadest selection of monitoring options available, the company said. It is the first monitor/defibrillator to integrate Masimo Rainbow SET Pulse CO-Oximetry technology for the noninvasive detection of carboxyhemoglobin (carbon monoxide in the blood) and methemoglobin in the blood (which may result from exposure to certain chemicals and drugs).

The design focuses on several key operational innovations which include the largest color screen on the market, with a one-touch button that flips the screen to high-contrast SunVue mode for easy viewing in sunlight; along with 10 times the processing speed and three times the battery life of its predecessor. Needed for the harshest rescue environments, Physio-Control developed the LIFEPAK 15 to be tougher than any other monitor/defibrillator on the market. For current LIFEPAK customers, this model reduces transition costs, with a user interface that complements the market-leading LIFEPAK 12 defibrillator/monitor. Emergency care providers are able to work with a mixed fleet of LIFEPAK monitors, and transition their equipment when budgets allow – enabling them to save on critical operational costs and minimize their overall training resources.