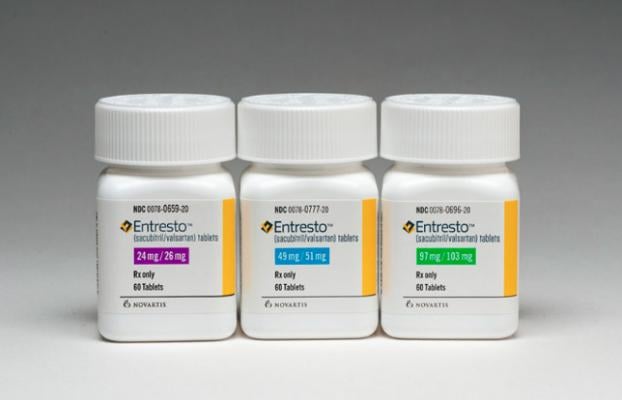 March 27, 2019 —New data from a four-week extension of the landmark PIONEER-HF Trial showed the drug sacubitril/valsartan (Entresto) continued to deliver reductions in the heart failure biomarker N-terminal pro–B-type natriuretic peptide (NT-proBNP), an established biomarker for heart failure severity and prognosis.[1] The data was presented as a late-breaker at the American College of Cardiology (ACC) 2019 Annual Scientific Session in March.

All patients received open-label Entresto during the four-week extension period, and data showed reductions in both groups in the HF biomarker NT-proBNP with use of Entresto, which was safe and well tolerated.[1] Patients in the control group who were treated during the initial eight-week double-blind period with a HF therapy, enalapril, showed a substantial reduction in NT-proBNP when switched to Entresto for the open-label period.1 Further, patients who started on Entresto in the hospital had a greater overall reduction in NT-proBNP after 12 weeks, compared with patients started on enalapril in the hospital and switched to Entresto at the eight-week mark.[1]

In addition, the greater improvement in a pre-specified, exploratory post-discharge outcome at eight weeks with Entresto was maintained throughout 12 weeks, suggesting that initiating Entresto after stabilization following an acute systolic HF admission may result in a reduction in a composite of serious clinical events.[1,2]

The serious clinical composite occurred in a lower percentage of patients who initiated Entresto in the hospital compared with those who initiated enalapril in the hospital and switched to Entresto after eight weeks post-discharge. The composite, which was explored as part of a pre-specified exploratory analysis, consisted of death, re-hospitalization for HF (hospital stay >24 hours), requirement for a left ventricular assist device (LVAD) insertion, or listing for a cardiac transplantation.

"This extension of the landmark PIONEER-HF study further demonstrates that starting appropriate patients on Entresto in the hospital is safe and provides important clinical benefit compared to starting patients on enalapril. We now know that initiating Entresto in the hospital, instead of waiting to switch post-discharge, can improve outcomes and can keep more of an especially vulnerable patient population out of the hospital longer," said Eugene Braunwald, M.D., founding chairman, TIMI Study Group, Brigham and Women's Hospital, Distinguished Hershey Professor of Medicine, Harvard Medical School, and chariman, PIONEER-HF.

Patients with systolic HF who need to be admitted to the hospital due to decompensation of their disease are at high short-term risk of death or being re-admitted to the hospital.[3,4] PIONEER-HF showed that Entresto can be initiated in the hospital in these patients safely, once they have been stabilized, with a tolerability profile comparable to enalapril. The safety profile in PIONEER-HF was similar to that seen in the pivotal PARADIGM-HF trial.2,5 Rates of symptomatic hypotension (low blood pressure), hyperkalemia (elevated levels of potassium) or worsening renal (kidney) function were similar among treatment groups and there was a numerically lower incidence of angioedema in patients treated with Entresto. There were no new safety signals identified during the four-week extension of PIONEER-HF.

About the PIONEER-HF 4-Week Extension Study

Of 881 systolic heart failure patients enrolled in PIONEER-HF, 832 (94%) continued into the 4-week open-label study after the 8-week initial study period, with 415 (50%) switched from enalapril to Entresto and 417 (50%) continued on Entresto at the time of the open-label extension. All patients had been admitted for acute decompensated heart failure (ADHF) and started on study drug following stabilization, while still hospitalized.1 The objectives were to describe changes in NT-proBNP by randomized treatment arm and to collect further safety and exploratory clinical data in both groups.

There were no additional angioedema events in either arm.

56.8% of patients in the study were receiving the highest approved dose of Entresto and 75.2% were receiving at least the middle dose recommended in the package insert by 12 weeks.

Over the 12-week study, in total, there was a 33% relative risk reduction (95% CI: 0.48, 0.94) in the serious clinical composite event endpoint in the patients treated and maintained with Entresto compared to those patients started on enalapril and then switched to Entresto for the 4-week open-label phase. The absolute risk reduction was 5.64%. During the initial 8-week period, the serious clinical composite endpoint reduction was known to have been driven by a reduction in HF hospitalization and death.

About the PIONEER-HF Trial

PIONEER-HF is a prospective, multicenter, double-blind, randomized, controlled trial designed to assess the safety, tolerability and efficacy of in-hospital initiation of Entresto compared with enalapril in appropriate, stable HFrEF patients who had been admitted for acute decompensation.[2,7]

A total of 881 patients, with an average age of 61 years, were randomly assigned to in-hospital initiation of Entresto or enalapril twice daily, following stabilization. Patients were eligible for screening no earlier than 24 hours and up to 10 days from initial presentation while still hospitalized. All patients were treated with the objective to optimize therapy to the maximum tolerated dose based on an SBP-based algorithm. Patients were predominantly male (approximately 72%), and half of patients had a BMI>30 kg/m2. Notably, more than one-third of patients (36%) were African American. Approximately 34% of patients were newly diagnosed, having no prior history of heart failure, and slightly more than 50% of patients were not receiving ACEi/ARB therapy at the time of admission.

The primary endpoint was the time-averaged proportional change in NT-proBNP from baseline through weeks 4 and 8. Patients treated with Entresto achieved a 47% reduction from baseline in time-averaged NT-proBNP, compared to a 25% reduction with enalapril, translating into a statistically significant 29% greater reduction with Entresto over the ACE inhibitor (95% CI: 0.63, 0.81; P<0.0001). Reductions in NT-proBNP were observed in Entresto patients as early as 1 week after treatment initiation.2 Rates of serious adverse events occurring with a frequency of ≥0.5% were similar between the Entresto and enalapril groups.

Safety and Tolerability Analyses During the Double-blind Period

Nearly 60% of patients were able to be up-titrated to the highest approved dose of Entresto within 6 weeks.

In a pre-specified exploratory analysis, the composite endpoint of death, re-hospitalization for HF, requirement for a left ventricular assist device (LVAD) insertion, or listing for cardiac transplant occurred in 41 (9.3%) patients in the Entresto group and 74 (16.8%) in the enalapril group (hazard ratio [HR] 0.54, 95% CI 0.37–0.79) during the double-blind period. The benefit was driven by reductions in death and re-hospitalization among patients treated with Entresto.