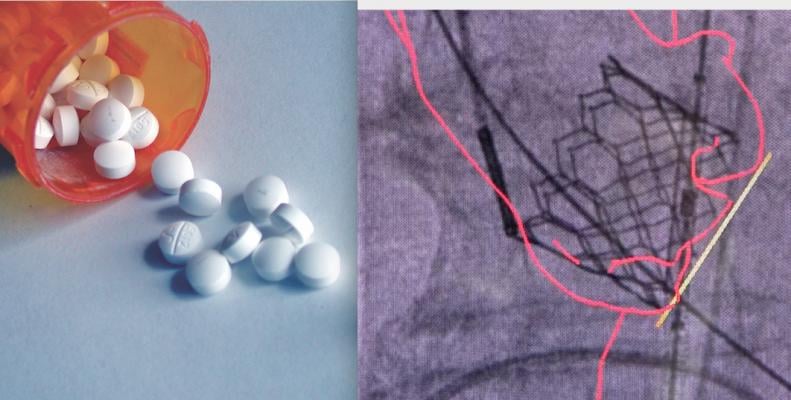 March 29, 2020 — Patients with atrial fibrillation (AF) who took oral anticoagulants alone after undergoing transcatheter aortic valve replacement (TAVR) had a lower rate of bleeding complications without an increased risk of clotting-related complications compared to patients who took antiplatelet medication in addition to oral anticoagulants. This was the outcome of the POPULAR TAVR trial, presented as a late-breaking session at the American College of Cardiology (ACC) 2020 Scientific Session.[1]

About 30 percent of patients who undergo TAVR have AF, and there have not been any guidelines on how to treat these patients, who require anticoagulation therapy to prevent AF-caused stroke. This trial offers new data on how these patients can be managed.

“The rates of complications for TAVR — especially complications related to bleeding — remain high,” said Vincent Nijenhuis, M.D., from the cardiology department at St. Antonius Hospital in Nieuwegein, Netherlands, and the study’s lead author. “This study helps physicians to better understand the risks of adding antiplatelet therapy to oral anticoagulants—namely, that doing so leads to more bleeding without reducing the rate of ischemic events. I think once physicians are aware of this, they will not treat patients undergoing TAVR so aggressively, leading to better outcomes.”

Both bleeding and clotting-related complications (such as stroke and heart attack) can be life threatening, especially among patients undergoing TAVR, who are generally older, have multiple comorbid conditions and are frailer than those who undergo open heart valve replacement. In focusing on patients with atrial fibrillation, who typically take oral anticoagulants for many years, the trial sought to address how best to balance the risk of clots against the increased risk of bleeding that comes with any anticoagulant or antiplatelet therapy.

Researchers enrolled 313 patients with atrial fibrillation undergoing TAVR at 17 sites in four European countries. Half were assigned to take oral anticoagulants alone and half took the antiplatelet drug clopidogrel for three months after TAVR in addition to oral anticoagulants.

“The results suggest it would be beneficial to not give clopidogrel — in fact, it’s safer because it does not lead to as many bleeding events,” Nijenhuis said.

The study is limited by its open label design, which means patients and doctors were aware of which patients had been randomized to receive clopidogrel versus oral anticoagulants alone, although outcomes were adjudicated by independent evaluators who were blinded to patients’ treatment status. In addition, Nijenhuis said that the study’s findings are only applicable to patients with atrial fibrillation. The researchers are assessing antiplatelet management in patients without atrial fibrillation in a separate cohort of the ongoing POPular TAVI study. Other studies are underway to assess other types of anticoagulation medications such as direct oral anticoagulants.

This study was simultaneously published online in the New England Journal of Medicine at the time of presentation. The trial was funded by The Netherlands Organization for Health Research and Development