Positive, Sustained Improvement at One Year in SCOUT I Transcatheter Tricuspid Repair Trial 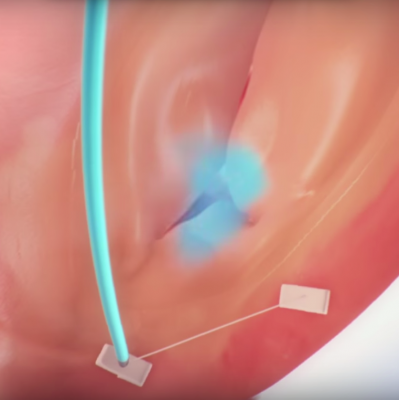 November 6, 2017 — One year follow-up data from the SCOUT I Early Feasibility Study for the Mitralign Trialign System showed positive results. The data was presented by Rebecca Hahn, M.D., FASE, director of interventional echocardiography and professor of medicine at Columbia University Medical Center / New York-Presbyterian Hospital, New York, and the national principal investigator for the SCOUT I Trial, at the 2017 Transcatheter Cardiovascular Therapeutics (TCT) conference.

“The SCOUT I study is the first, Early Feasibility Study in the US with core lab adjudicated 1 year data showing long-term improvement in a population of subjects with severe, progressive TR,” stated Dr. Rebecca Hahn. “Patients in the study continue to report feeling better, which is supported by sustained improvement in multiple clinical and quality of life measures.”

Watch the VIDEO “Transcatheter Tricuspid Valve Repair and Replacement Technologies,” a discussion with Hahn about the Trialign device.

“One year is the benchmark for sustainability in a therapy and we are very pleased with the results,” stated Rick Geoffrion, CEO of Mitralign. “As a leader in the transcatheter tricuspid space, we continue to show robust clinical data as we drive towards the commercialization of the product.”

The Trialign System is currently enrolling in the SCOUT I Early Feasibility Study and the SCOUT II CE Mark study.

It is estimated that 50 percent of patients with mitral regurgitation have moderate to severe tricuspid regurgitation.[2] The annual incidence of patients with TR is increasing with an estimated 220,000 patients in the US, and 330,000 patients in the EU developing moderate-severe TR each year1. Despite the large prevalence of patients, TR is generally untreated by surgery with approximately 10,000 tricuspid valve surgeries performed annually in the U.S.[3] Annuloplasty repair is the most used technique for tricuspid valve surgery and represents 90 percent of the current volume. Isolated tricuspid valve surgery is particularly rare representing only 10 percent of current procedures while the remaining 90 percent are performed in conjunction with other left-heart surgeries.[3,4] Permanent pacemaker (PPM) or implantable cardioverter defibrillator (ICD) lead placement has been shown to increase the frequency and/or severity of TR in multiple reports.[5-11]