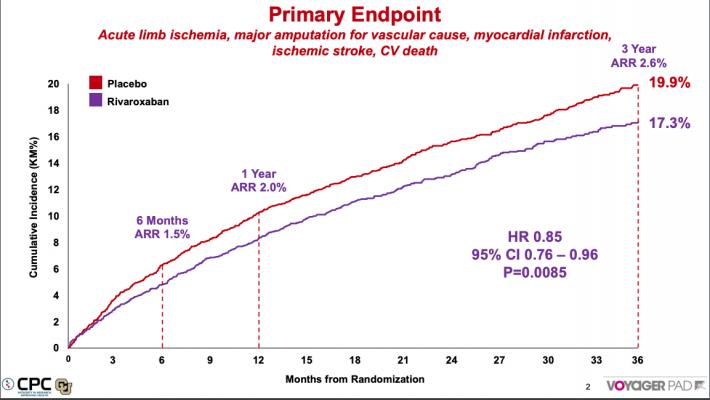 March 28, 2020 — People with symptomatic peripheral artery disease (PAD) who took the blood thinner rivaroxaban with aspirin after undergoing a procedure to treat blocked arteries in the leg had a 15 percent reduction in the risk of major adverse limb and cardiovascular events when compared with those receiving aspirin alone. This was according to results of the late-breaking VOYAGER PAD presented today in the late-breaking trials session of the virtual American College of Cardiology (ACC)  Annual Scientific Session.[1]

Data also showed that while patients taking rivaroxaban had higher rates of bleeding, there was no excess in severe bleeding events such as intracranial or fatal bleeds, which is a common concern when using anticoagulants, even at a low dose.

The study fills a void in the treatment of people with PAD undergoing limb revascularization, as there have been few studies in this population in this setting.

An estimated 10 million U.S. adults and 200 million people worldwide have PAD, which is associated with leg pain, difficulty walking, poor circulation that can lead to non-healing wounds and a high rate of limb loss. People with PAD are at very high risk of serious adverse events, including acute limb ischemia that can lead to limb amputation or death if not treated quickly with lower extremity revascularization. PAD is also associated with a high risk of heart attack, stroke and even death. Patients with symptomatic PAD are commonly treated with procedures to open arteries in the leg to improve symptoms and prevent limb loss, but they remain at very high risk of ischemic limb and cardiovascular events.

“We found adding low-dose rivaroxaban after peripheral artery intervention significantly reduced the spectrum of complications that we fear most in PAD, which is acute limb ischemia, major vascular amputation, heart attack and stroke. This benefit was not only seen early on but was also maintained over time,” said Marc P. Bonaca, M.D., associate professor and director of vascular research at the University of Colorado School of Medicine and the study’s lead author. “These data provide evidence of an antithrombotic regimen that effectively reduces risk, and although bleeding rates were higher, the overall risk-benefit remains quite favorable and could have a profound impact on patients’ lives.”

Furthermore, there are no Class I recommendations for antithrombotic therapy beyond aspirin or clopidogrel and none specific to the postrevascularization setting for people with PAD. Bonaca said the study could save lives, noting that prespecified risk-benefit analyses showed that if 10,000 patients are treated for a year with this strategy versus placebo, 181 events would be prevented at a cost of 29 bleeds, but with no difference in intracranial or fatal bleeds.

“In contrast to actual heart attacks of the heart, many patients and clinicians are unfamiliar with acute limb ischemia, the risk and the poor outcomes associated with severe complications of PAD,” Bonaca said, adding that many clinicians default to dual antiplatelet therapy (DAPT) using aspirin and a P2Y12 receptor blocker such as clopidogrel. He said that while this is the standard of care to prevent thrombosis following coronary interventions, there is little evidence on its clinical utility in patients with PAD and the one trial evaluating this question showed DAPT increased bleeding.

Unlike prior studies that recruited stable PAD patients or reported outcomes in PAD patients as subgroups of coronary disease trials, VOYAGER PAD only enrolled patients who had symptomatic PAD that required limb revascularization. A total of 6,564 patients at 542 medical centers in 34 countries were randomly assigned in a double-blind, one-to-one fashion to receive either rivaroxaban 2.5 mg twice daily and aspirin 100 mg daily or placebo and aspirin 100 mg daily for a median of 28 months. A limited course of clopidogrel was allowed at the discretion of the treating doctor. One out of 4 patients needed lower limb revascularization due to critical limb ischemia, while 3 out of 4 undergoing the procedure reported claudication and symptoms of leg pain. About two-thirds underwent endovascular revascularization treatment with stenting and balloons, while one-third had surgery to bypass the blockage. Patients averaged 67 years of age, and 74 percent were male.

At 28 months median follow-up, patients who took rivaroxaban plus aspirin had a significant reduction in the composite primary endpoint of acute limb ischemia, major amputation for vascular cause, heart attack, ischemic stroke or cardiovascular death when compared with those receiving aspirin alone, with an event rate of 17.3 vs. 19.9 percent, respectively.

The principal safety outcome was TIMI major bleeding (a standard definition and assessment of bleeding events), and while these bleeds were more frequent in patients taking rivaroxaban plus aspirin compared with those receiving aspirin alone (occurring in 2.7  vs. 1.9 percent of patients, respectively), Bonaca reported this difference was not statistically significant. The total difference in the number of events was 18, with 62 occurring in the rivaroxaban group and 44 in the placebo group. Researchers found no difference in intracranial bleeds (0.6 percent in the rivaroxaban group and 0.9 percent in the control group) or fatal bleeding (0.21 vs. 0.21 percent). ISTH major bleeding was significantly higher with rivaroxaban compared with aspirin alone, occurring in 140 (5.9 percent)) patients versus 100 (4.1percent)) patients, respectively. There were six fatal bleeds in each arm.

“We saw a very profound reduction in acute limb ischemia,” Bonaca said. “There were very few takeback bleeds, those that require people to return to the procedure room to control the bleeding, at the time of the intervention and although the rates of TIMI major bleeding, the primary safety outcome, were higher with rivaroxaban, there was no difference in irreversible harm events like intracranial or fatal bleeding.”

The efficacy and safety results were consistent across all major subgroups, including patients with critical limb ischemia and regardless of the type of revascularization or surgery received. This study was simultaneously published online in the New England Journal of Medicine at the time of presentation.[1]

The study was funded by Bayer AG and Janssen Research and Development.