St. Jude Medical turned to the courts to to dispute Muddy Waters and MedSec market report that claims they were financially motivated to make false claims 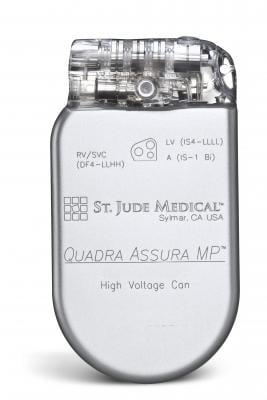 September 7, 2016 — St. Jude Medical Inc. (SJM) has filed a lawsuit against Muddy Waters Consulting LLC, Muddy Waters Capital LLC, MedSec Holdings Ltd., MedSec LLC and three individual defendants who are principals in these firms, for false statements, false advertising, conspiracy and the related manipulation of the public markets. This is in regards to a market report these firms released in August that claimed SJM’s implantable electrophysiology (EP) cardiac rhythm management devices were not secure against cyber attack and present a danger to patient safety. With this court action, SJM said it seeks to hold these firms and individuals accountable for what the company calls false and misleading tactics. The company also said it wants to set the record straight about the security of its devices and to help cardiac patients and their doctors make informed medical decisions.

The investment research firm Muddy Waters Capital released a report Aug. 25 saying it believed SJM would lose up to half of its revenue due to what it calls issues with its EP devices, including pacemakers, implantable cardioverter defibrillators (IDCs) and cardiac resynchonization therapy (CRT) devices. The firm claimed these devices pose a public health risk and might be recalled or need remediation because of their vulnerability to cyber attack. SJM responded Aug. 29, calling the report false and misleading.

(Updated information -- In April 2017, the FDA issued a warning letter to Abbott / St. Jude Medical related to the company’s mismanagement of the recall of the EP devices mentioned in this article. The FDA also said SJM failed to properly address the cybersecurity issues oulined in the Muddy Waters report, which were later confirmed by the FDA as issues with these devices. Read the article “FDA Harshly Criticizes Abbott, St. Jude For Failure to Address EP Device Safety.”)

"We felt this lawsuit was the best course of action to make sure those looking to profit by trying to frighten patients and caregivers and by circumventing appropriate and established channels for raising cybersecurity concerns, do not use this avenue to do so again,” said Michael T. Rousseau, president and chief executive officer at St. Jude Medical. He said SJM has processes in place to encourage anyone with information about the security of our technology to share it with the company so it can be resolved. ”We believe this lawsuit is critical to the entire medical device ecosystem — from our patients who have our life saving devices, to the physicians and caregivers who care for them, to the responsible security researchers who help improve security, to the long-term St. Jude Medical investors who incurred losses due to false accusations as part of a wrongful profit-making scheme."

The lawsuit filed Sept. 7 alleges that Muddy Waters, MedSec and the other defendants intentionally disseminated false and misleading information in order to lower the value of SJM stock and to wrongfully profit from a drop in share value through a short-selling scheme. The company’s complaint claims the defendants’ served their own financial self-interest by attempting to mislead doctors and patients and demonstrates a total disregard for the patients whose lives depend on their cardiac management devices. The complaint also cites a third-party assessment of the Muddy Waters Report by University of Michigan researchers who found that “the evidence does not support their conclusions… [the University of Michigan researchers] were able to generate the reported conditions without there being a security issue.” In addition, an electrophysiologist and cardiologist from the University of Michigan also stated that “given the significant benefits from home monitoring, patients should continue to use their prescribed cardiac devices” at this time.

“We recognize that the cybersecurity landscape is dynamic, which is why we partner with researchers, agencies, consultants and others to continually strengthen our security measures currently in place,” said Phil Ebeling, SJM vice president and chief technology officer. “We also have processes in place to encourage anyone with information about the security of our technology to share it with us so that we can enhance our technology for the benefit of patients.”

SJM said its devices and systems have multiple features to reduce the risk of cyber security attacks and works with the U.S. Food and Drug Administration, the Department of Homeland Security and independent researchers to continually strengthen its security systems.

"Our top priority is to reassure patients, caregivers and physicians who use our life-saving devices that we are committed to the security of our products and to ensure patients and their doctors maintain ongoing access to the proven clinical benefits of remote monitoring," said Mark Carlson, SJM ice president and chief medical officer. "We decided to take this action because of the irresponsible manner in which these groups have acted."

The lawsuit was filed in the United States District Court for the District of Minnesota. This case follows St. Jude Medical's recent statements that refuted claims by Muddy Waters and MedSec regarding the safety and security of our pacemakers and defibrillators.