CREST trial finds both methods have equal risk of stroke, development of restenosis 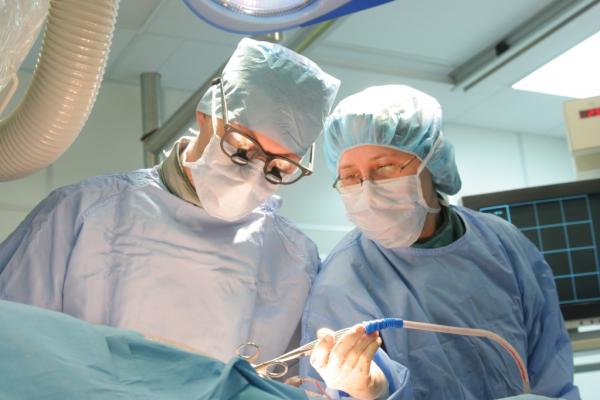 February 22, 2016 — Investigators for the Carotid Revascularization Endarterectomy versus Stenting Trial (CREST) found stenting and surgery are equally effective at lowering the long-term risk of stroke from a narrowed carotid artery. Results of the study were published in The New England Journal of Medicine.

CREST, a federally funded clinical trial, looked at 2,502 patients with an average age of 69 over a 10-year period. The risk of stroke after either stenting or surgery was about 7 percent in the study population. In addition, the development of restenosis, re-narrowing of the carotid artery, was only 1 percent per year for both stenting and surgery. Each patient was evaluated every six months for a 10-year period at 117 centers across the United States.

“Over 140,000 carotid revascularizations are performed on a yearly basis, making these very common procedures. Previous results from CREST found stenting and surgery to be equally safe,” said Virginia Howard, Ph.D., professor at the University of Alabama at Birmingham School of Public Health. “The question then became which procedure has the most durability. We found that both procedures lower the long-term risk of stroke. The major risk difference between the procedures comes during the peri-procedural period.”

The carotid artery runs up each side of the neck. Atherosclerosis is a condition in which plaque buildup causes narrowing and hardening of the artery, reducing blood flow and causing clotting that can result in a stroke.

Carotid endarterectomy is an invasive surgical procedure in which surgeons open up the artery to remove the plaque. This more traditional approach to prevent strokes has been performed since 1946. Carotid angioplasty, or stenting, is a newer, less invasive procedure in which a catheter is threaded through blood vessels from the groin. A balloon opens up the blocked artery, and then a mesh stent is placed to hold it open.

Both surgery and stenting are procedures to prevent strokes in those patients who have had transient ischemic attack — a mild stroke — and in patients who have not had any stroke symptoms within the past six months.

As the principal investigator of the Statistical and Data Management Center for CREST, Howard is part of the clinical trial led by investigators out of the Mayo Clinic’s Florida campus and Rutgers New Jersey Medical School. UAB provides overall clinical trial management, statistical collaboration and analysis, and design and maintenance of systems to receive and manage data from participating clinics and core labs across North America.

CREST is funded by a grant (U01 NS038384-11) from the National Institute of Neurological Disorders and Stroke and the National Institutes of Health. Additional support comes from Abbott Vascular, including donations of Accunet and Acculink systems that were equivalent to approximately 15 percent of the total study cost, to CREST centers in Canada and the United States that were at U.S. Department of Veterans Affairs sites.