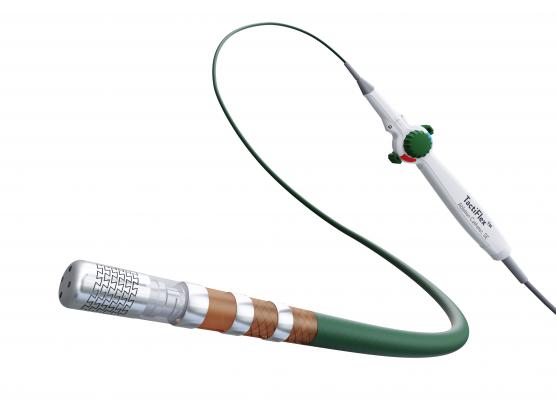 August 4, 2020 — Abbott announced the first enrollments in the TactiFlex PAF  investigational device exemption (IDE) study to evaluate a new device to treat people suffering from paroxysmal atrial fibrillation (PAF). The study will evaluate the performance of the investigational TactiFlex Ablation Catheter, Sensor Enabled (SE) for people whose atrial fibrillation (AFib) symptoms are unable to be managed by medication.

Physicians use tools, such as contact force technology, during ablation procedures to help them apply the right amount of pressure to the heart tissue to improve procedural effectiveness. Additionally, physicians use magnetic sensor enabled technology, such as the TactiCath Contact Force Ablation Catheter, Sensor Enabled, for precise location and navigation within the heart.

"The TactiFlex device builds on prior generations of successful technology, giving me confidence that Abbott will continue providing options to effectively treat people living with recurrent episodes of atrial fibrillation," said Prof. Prash Sanders, director of Centre for Heart Rhythm Disorders at The Royal Adelaide Hospital in Adelaide, South Australia.

The start of the TactiFlex PAF IDE trial is among a series of product-focused activities from Abbott designed to better meet the needs of electrophysiology. The company recently secured U.S. Food and Drug Administration (FDA) and CE mark approval for the EnSite LiveView Dynamic Display. LiveView is designed to allow data from the Advisor HD Grid mapping catheter to be visualized in real time during cardiac ablation procedures. The Advisor HD Grid catheter is designed to capture information often missed with traditional mapping catheters.

The TactiFlex Ablation Catheter, SE is being clinically evaluated as part of the TactiFlex PAF IDE, a global study, and is not commercially available.

About Cardiac Ablation for Atrial Fibrillation

Cardiac ablation is a minimally invasive procedure that can treat abnormally fast heartbeats by creating lesions (ablating) in small areas of heart tissue that a physician has identified as causing the arrhythmia. When physicians use catheter ablation to treat cardiac arrhythmias, long flexible tubes — called catheters — are inserted into the heart to study the arrhythmia and to deliver radio frequency (RF) energy. Heat generated from the RF energy creates a scar on the tissue where the abnormal heartbeats originate; this type of ablation has become the gold standard for treating AFib. As a result, this tissue is no longer capable of conducting or sustaining the arrhythmia.

More than 16 million people globally are impacted by recurrent AFib, episodes of sporadic, irregular heartbeats when the heart's upper chambers beat out of sync with the lower chambers. People suffering from AFib face a number of challenges to their quality of life, including episodes of dizziness, fatigue and shortness of breath. Long term, they also face increased risk of stroke or heart failure.