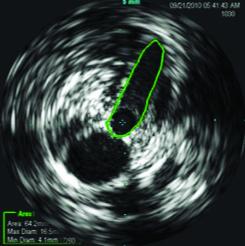 In image-guided treatments of the blood vessels, there is an increasing trend to use IVUS catheters that are capable of producing ultrasound images of the interior of blood vessels. There is a growing body of clinical evidence that the use of this technology in conjunction with interventional X-ray helps improve procedural outcomes.

In the 100-patient prospective multicenter Venogram Versus Intravascular Ultrasound for Diagnosing Iliofemoral Vein Obstruction (VIDIO) study, 29 percent of patients were assessed to be free of lesions based on their X-ray venogram results, but had lesions detected by Philips Volcano’s phased-array IVUS technology. The results of the study, in which IVUS in total detected 88 percent more lesions than multiplanar X-ray venography (as assessed by investigators at the point-of-care), were announced at the American Venous Forum 28th annual meeting.

Iliac/common femoral vein obstruction (ICFVO) is a significant cause of chronic venous insufficiency (CVI) — a condition that is estimated to affect between 10-35 percent of adults in the United States, resulting in approximately 4.6 million lost workdays. Iliofemoral vein obstruction, which can eventually lead to swelling, chronic pain and ulceration, can be treated via angioplasty and stenting with profound benefits to the patient’s quality of life. However, many patients exhibiting symptoms may not be diagnosed with venography. There is, therefore, a real need for better ways to diagnose the condition.

“These results of the VIDIO study clearly show that IVUS is better at detecting lesions than multiplanar X-ray venography, the prior imaging gold standard,” said Gagne, global principal investigator of the study. “IVUS is now my preferred imaging modality of choice for identifying this treatable condition, and the VIDIO study shows how well these patients can do with the appropriate treatment.”

The study was designed to prospectively compare the diagnostic performance of conventional multiplanar venography versus IVUS for diagnosing and treating ICFVO; and to characterize patient response to iliofemoral vein intervention in terms of clinical improvement and quality of life over six months of follow-up.

Across the full 100 patients enrolled, according to investigator readings at the time of the index procedure, IVUS detected 88 percent more lesions than multiplanar venography (124 vs 66) (P < .0001). In addition, 29 percent of patients were ruled negative by venograms, while showing positive findings from IVUS (19 vs 48).