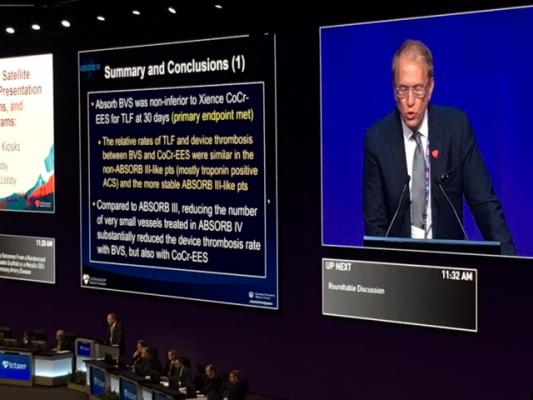 First-generation BVS have been associated with higher rates of TLF and device thrombosis than current metallic drug-eluting stents. It has been thought that this may be in part due to suboptimal implantation technique used in early studies. Therefore, the ABSORB IV trial mandated the avoidance of smaller vessels, and aggressive pre-dilatation and routine high-pressure post-dilatation were emphasized.

ABSORB IV also permitted the enrollment of more complex and higher-risk patients than ABSORB III, with inclusion of troponin-positive acute coronary syndrome (ACS) and up to three lesions in a maximum of two epicardial coronary arteries, including thrombus. Patients were randomized 1:1 to BVS or CoCr-EES after successful pre-dilatation with a 1:1 sized balloon.

“At 30 days, BVS was non-inferior to CoCr-EES for target lesion failure,” said Gregg W. Stone, M.D., professor of medicine at Columbia University Medical Center, and director of cardiovascular research and education at the Center for Interventional Vascular Therapy at NewYork-Presbyterian Hospital. “The rates of non-peri-procedural MI [myocardial infarction] and ID-TLR at 30 days were greater with BVS than with CoCr-EES, and a trend toward greater stent thrombosis with BVS was present. Compared to ABSORB III, reducing the number of very small vessels treated in ABSORB IV substantially reduced the device thrombosis rate in both groups. These results are largely consistent with those from earlier ABSORB trials, and highlight the need for continued advancements in device technology and standardized technique to further improve the early safety profile of BVS.”

The ABSORB IV trial was funded by Abbott Vascular. Stone reported that he is chairman of the ABSORB global clinical trial program (uncompensated) and a consultant to Reva Inc.