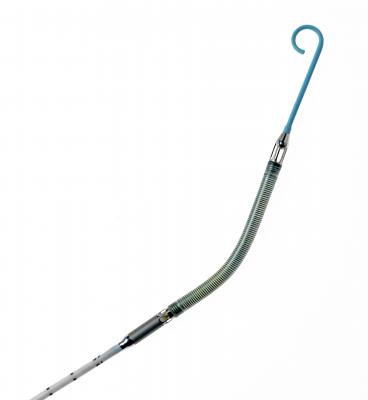 September 11, 2012 -- Abiomed Inc. announced it has received 510(k) clearance from the U.S. Food and Drug Administration (FDA) for a new percutaneous, catheter-based Impella ventricular assist device (VAD) providing peak flows of approximately 4 liters of blood per minute. The increased flow is delivered on the same console platform, 9 French catheter and introducer as the Impella 2.5. This new heart pump will be marketed as the Impella CP (Cardiac Power) within the United States and has been commercially known outside the U.S. as the Impella cVAD.

“The clinical community has been anxiously anticipating the arrival of this new Impella pump. The Impella CP promises a substantial amount of cardiac power, can be inserted quickly, and is ideal for patients that require more hemodynamic support,” said John Lasala M.D., medical director of Washington University School of Medicine in St. Louis. “It is exciting for physicians to be able to provide this type of percutaneous support that represents approximately 80 percent of what a healthy heart can pump each minute.”

This 510(k) clearance designates that the Impella CP has the same indications for use as the Impella 2.5 and includes a limitation in the Impella CP instructions for use (IFU). In April 2012, Abiomed received CE marking approval to market the Impella cVAD in the European Union. Abiomed plans to have a controlled launch with top heart hospitals in the United States, with full U.S. commercial availability of the Impella CP expected by the fourth quarter of fiscal 2013.

Abiomed has three FDA studies (PROTECT I, RECOVER I, PROTECT II) that are now published on Impella, and there are also over 150 peer reviewed publications including real world usage data from the Europe and U.S. Impella registries. Additionally, Impella has been utilized to support over 10,000 U.S. patients, has been incorporated into the medical guidelines and has recently been approved for a dedicated CPT code for physician payment.