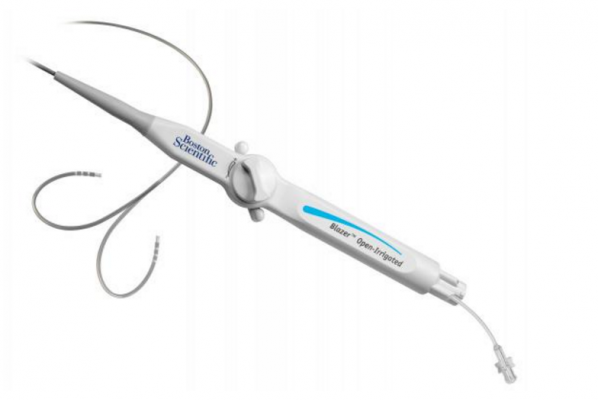 March 11, 2016 — Boston Scientific has received U.S. Food and Drug Administration (FDA) approval for the Blazer Open-Irrigated (OI) radiofrequency ablation catheter. The Blazer OI catheter has been approved to treat Type I atrial flutter, an abnormal rhythm of the upper chambers of the heart. The approval of the Blazer OI catheter marks the first time Boston Scientific will offer an open-irrigated catheter to the U.S. market.

The device is designed for use in ablation procedures to restore a normal heart rhythm for patients in atrial flutter. During the procedure, localized electrical energy is delivered through an electrode on the tip of a catheter into the heart muscle, creating heat to destroy a small area of the tissue responsible for the abnormal heart rhythm. The catheter features Total Tip Cooling technology intended to cool the catheter tip consistently during the ablation procedure, improving the quality of the ablation lesion.

The Blazer OI catheter was granted approval based on data from the BLOCk-CTI clinical trial, a prospective, randomized trial that enrolled 302 patients at 24 sites in the United States. It evaluated the safety and effectiveness of the Blazer OI catheter in patients with sustained or recurrent Type 1 atrial flutter.

"Successful results from the BLOCk-CTI trial demonstrate that the Blazer open-irrigated catheter is safe and effective for the ablation of atrial flutter," said Tom McElderry, M.D., principal investigator, associate professor and section chief of electrophysiology at the University of Alabama at Birmingham. "This newly approved ablation tool was built on the proven Blazer platform of therapeutic catheters and facilitates excellent maneuverability, consistent cooling and stability during procedures."

In the U.S., the IntellaTip Mifi OI catheter is an investigational device and is not available for sale.