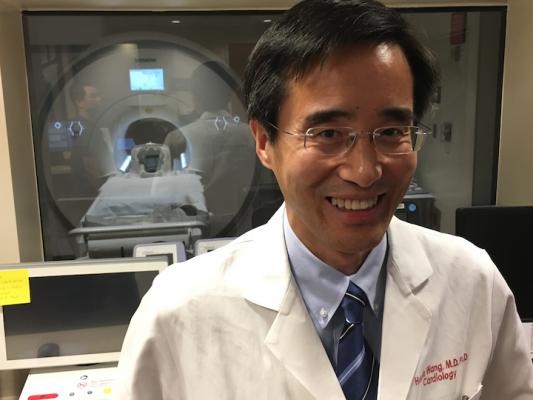 Traditionally, computed tomography (CT) and ultrasound have been the workhorse imaging modalities in the world of cardiology. While the advantages of these modalities have afforded them a prominent position in cardiac imaging, magnetic resonance imaging (MRI) is promising because it directly addresses the shortcomings of both modalities — cardiac magnetic resonance (CMR) provides excellent soft tissue contrast without giving any ionizing radiation dose to the patient.

“Cardiac MR is a multimodality imaging tool by itself,” according to Haojie Wang, M.D., director of advanced cardiovascular MRI and a member of the heart valve clinic at Baylor Scott White Heart Hospital. His hospital installed a dedicated cardiac Siemens 1.5T MRI scanner in 2018, affording new opportunities unavailable with CT. In particular, Wang highlighted the ability to do functional assessment of the heart for various conditions with metrics such as left ventricular (LV) and right ventricular (RV) systolic function and volume, as well as wall motion.

“For patients with CHF [congestive heart failure] or decreased LV systolic function, MRI could answer multiple questions to guide our decision-making in patient management,” he said. If depressed left ventricular ejection fraction (LVEF) is detected in CHF patients, MRI can further characterize the condition as ischemic or non-ischemic based on the myocardial scarring pattern.

The advantages of cardiac MRI have spurred a great deal of research and innovation in the space recently, as clinicians look to expand the modality to new applications and enhance its utility in others.

Watch an interview with Wang in the VIDEO: Dedicated Cardiac MRI Use at the Baylor Scott White Heart Hospital. 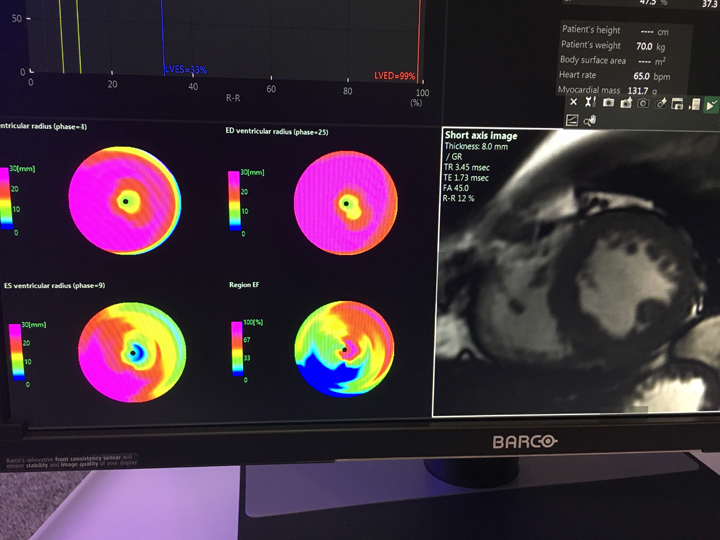 The application of stress MRI for the management of potential ischemia has been one of the most heavily studied applications of the modality in recent years. Numerous single-center studies had demonstrated high diagnostic accuracy and prognostic value of stress CMR, and multiple guidelines have strong recommendations for it. Despite this, stress CMR accounts for less than 5 percent of noninvasive stress imaging in the U.S., according to a study presented at the 2018 European Society of Cardiology (ESC) Congress.

The retrospective study looked at real-world data from 13 U.S. centers, where 2,371 patients with suspected ischemia underwent stress CMR over a five-year period. All patients showed clinical signs and symptoms of cardiac ischemia, and had a 33 percent likelihood of coronary artery disease (CAD) according to CAD consortium scores. Ultimately, 32 percent of all patients were found to have ischemia or myocardial infarction as seen on stress CMR.

“Stress CMR is an effective modality in the real-world setting in detecting patients at high risk of cardiac events,” said Raymond Y. Kwong, M.D., MPH, director of cardiac MRI and associate professor at Harvard Medical School, who presented the study. “In addition, preliminary cost analyses suggest its use may potentially reduce costs of downstream cardiac testing. Our evidence supports the expanded utilization of stress CMR in evaluation of chest pain syndromes in the United States.”

In addition to its use in the interventional lab, MRI is also seeing increased use on the electrophysiology side of cardiology. One of the newest devices being explored is the Vision-MR ablation catheter from Imricor. The device, when used with the Advantage-MR EP Recorder/Stimulator System, allows physicians to perform cardiac ablations under MRI guidance, offering a radiation-free environment for patients and physicians. Intraprocedural MR imaging allows for real-time soft tissue imaging of the cardiac anatomy and substrate. This has the potential to improve first-time success rates of ablation procedures by providing lesion visualization and verification. In addition, real-time assessment of the cardiac substrate has the potential to allow physicians to deliver individualized ablation strategies.

One of the biggest disadvantages of cardiac MRI, and the primary reason it has not seen greater adoption as yet, is that exams can be an hour or more in length. The exams are also extremely expensive as a result. New advances in artificial intelligence (AI) are working to automate more elements of the exam to help reduce scan time.

One of the most drastic examples was on display by a startup called HeartVista at the 2018 Radiological Society of North America (RSNA) annual meeting last November. HeartVista was showcasing its one-click, AI-based MRI solution that can potentially reduce a 90-minute ischemia exam down to just 15 minutes. The solution integrates with existing MRI scanners to guide image acquisition. The software prescribes the standard cardiac views automatically in as little as 10 seconds. This also eliminates the need for breath holds — a major source of added time for exams and a source of discomfort for many patients. An artifact detection algorithm assesses image quality and will prompt the technician if a retake is needed. Accelerated non-Cartesian 4-D flow is acquired in minutes, leaving enough time for the necessary calibrations prior to myocardial delayed-enhancement acquisition. In post-processing, smart in-line cardiac analysis provides preliminary measurements of LV function.

Arterys also displayed new AI capabilities for cardiac MRI at RSNA 2018, debuting more than 80 new enhancements to its Cardio AIMR solution. The deep-learning and cloud-based Arterys platform is designed to enhance clinician workflow for imaging of various body regions. Among the new enhancements are:

• Quantitative delayed enhancement for automated segmentation of the myocardium and identification of reference points. Users can obtain scar quantification and extent enhancement on a 17-segment American Heart Association (AHA) plot.
• Semi-quantitative perfusion, including segmentation, identification and co-registration. Users can simply create a blood pool region of interest (ROI) to obtain signal intensity graphs and semi-quantitative values, such as upslope and time to peak, on a 17-segment AHA plot.

While MRI has not been a prominent modality in the interventional lab, but it may play a bigger role in the coming years. A June 2018 study suggested a new way it could be used to aid peripheral artery disease (PAD) interventions.

The study, conducted by a research team from Sunnybrook Research Institute in Toronto, used a steady-state free precession (SSFP) MR angiogram to locate and assess the thickness of peripheral lesions. This family of MRI sequences, a modification of gradient echo imaging, produces bright blood images, with enhanced contrast between the myocardium and the blood pool in the heart. This technique could be employed for peripheral interventions that sometimes have to be aborted because the lesion is too thick for the guidewire to pass through.

A total of 14 patients scheduled for peripheral interventions were imaged beforehand. In addition to the MRI, ultrashort echo time was used to characterize the hard lesion components, including calcium and collagen. The research team defined a hard lesion as one where 50 percent or more of the lumen was occluded with collagen or calcium in the hardest cross-section of the lesion; eight lesions were deemed hard and six were deemed soft. During the ensuing interventions, the primary outcome was the time it took for the guidewire to cross through the target lesion; the need for stenting was assessed as a secondary outcome. The hard lesions did take significantly longer to cross (14 minutes, 49 seconds) than the soft lesions (2 minutes, 17 seconds), and the former also required more stenting. The study supports the idea that patients could be more carefully selected for peripheral endovascular procedures.

As with any medical technology, cardiac MRI will likely grow in prominence as more data is collected on how it is being used in clinical practice. The Society for Cardiovascular Magnetic Resonance (SCMR) recently launched the SCMR Registry in the hopes of accelerating the process. The global registry was created to promote evidence-based utilization of CMR by providing a mechanism for tracking patient outcomes and making registry data available to the wider CMR research community. The society will work with Heart Imaging Technologies (HeartIT) to provide a web-based cloud infrastructure forming the backbone of the registry. Through this agreement, the registry — which already includes more than 60,000 imaging reports — will provide a web-based mechanism for cardiac MRI centers to upload de-identified patient data, CMR indications and images. Data will be protected with state-of-the-art security and privacy standards.

"The SCMR Registry is designed to support the mission of the SCMR, namely to improve cardiovascular health by advancing the field of cardiovascular magnetic resonance,” said SCMR CEO Orlando Simonetti. “This partnership with HeartIT will take the SCMR Registry to the next level by complete integration of DICOM image data, automated tools to track patient outcomes, and the inclusion of many additional CMR centers around the world.”