Bioresorbable Stent Comparable to Xience at Two Year, But With Adverse Trends 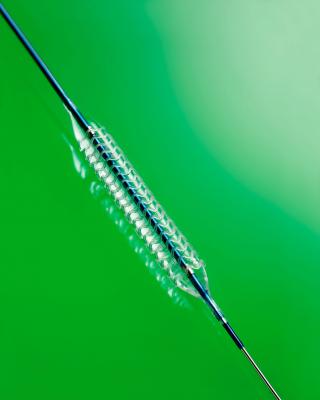 March 21, 2017 — In the late-breaking ABSORB III Trial two year results presented at the American College of Cardiology (ACC) this past weekend, the Abbott Absorb everolimus-eluting bioresorbable vascular scaffold (BVS) had comparable results to the market leading Xience drug-eluting metal stent between years one and two. However, Absorb patients had an overall elevated risk of adverse outcomes at two years compared with patients receiving metal stents. The main driver for these negative outcomes was the stent being placed in vessels of 2.5 mm or smaller diameter.

“A key take-home is that this device shouldn’t be used in very small vessels,” said Stephen Ellis, M.D., a director of interventional cardiology at Cleveland Clinic, and the study’s lead author. “This isn’t necessarily surprising because the Absorb BVS is considerably larger than the Xience stent, but it would have been preferable to have more consistency with regard to the vessel sizing and utilization of the device in the study.”

Current U.S. Food and Drug Administration (FDA) instructions for the Absorb BVS recommend avoiding its use in small vessels; the study was conducted before this guidance and updated implantation techniques were in place.

Previously-reported year one results showed Absorb BVS to be non-inferior to metal stents in terms of the trial’s primary endpoint — target lesion failure as measured by a composite of cardiac death, target lesion heart attack and ischemia-driven target lesion revascularization at one year. The new results show that non-inferiority was retained for the span between years one and two, but that at the end of year two patients receiving Absorb BVS showed a significantly higher risk of target lesion failure. However, inconsistencies with regard to adherence to study protocols and the procedural techniques used to place the device appear to account for some adverse outcomes, researchers said. They report sub-analyses suggesting that proper use and placement of the device reduces the differences in outcomes between Absorb BVS and the metal stent at two years to a non-significant level.

Read the article “ Questions Remain on Future of Bioresorbable Stents.”

The ABSORB III trial enrolled 2,008 patients treated at 193 centers, primarily in the United States. Patients had up to two areas of significant plaque buildup in separate vessels and were randomized to receive either the Absorb BVS (1,322 patients) or the Xience stent (686 patients). Both stents gradually release everolimus, a drug to prevent scar tissue from growing within the stent.

Question Over Whether Device is Inferior to Xience

There were many questions raised by the ABSORB III data as to whether it shows the BVS is interior or non-inferior to Xience.

“These results show that this device is generally comparable with the drug-eluting metal stent when the device is placed in appropriately-sized vessels and placed using appropriate procedural techniques,” Ellis said.

Ellis said operators are still learning how to use the device, and many went into the ABSORB trials using the stent just like a metallic stent. However, he said it is a very different device and requires different implantation techniques. This include pre-dillitation of the vessel and post dilatation of the stent to ensure it is properly set into the vessel wall. These two steps greatly aid stent strut apposition, which should improve outcomes, Ellis explained.

He also said better patient and vessel segment selection should be used, as the device is not ideal for all patients or all lesions.

These concepts were were reinforced by panelist Antonio Colombo, M.D., FACC, FESC, FSCAI, director of the invasive cardiology department at San Raffaele Scientific Institute and Columbus Hospital in Milan, Italy. “We know these devices started with some problems, and now we know to avoid use in some patients and not to use them in 2.5 or smaller vessels,” he said. “I think the message [from this trial] is that this device is not inferior. With the proper technique and proper patient selection, you can make the BVS non-inferior to Xience.”

However, panelist Roxana Mehran, M.D., disagreed. She is the director of interventional cardiovascular research and clinical trials at the Zena and Michael A. Weiner Cardiovascular Institute at Mount Sinai School of Medicine. “This is clearly an inferior result,” she said. “Even if you avoid small vessels and use the newer techniques.” She suggested part of the issue with thrombosis rates may be due to the short duration of dual anti-platelet therapy (DAPT) used in the trial. She suggested longer term DAPT out to three years, until the stent is fully dissolved.

This might be one solution to the in stent thrombosis rates leading to heart attacks in the target lesion in the Absorb arm. Ellis said one of the issues with Absorb is if a section of stent struts is not well apposed to the vessel wall, the struts become pliable and droop into the lumen, similar to a wet noodle. He said this is likely the cause of thrombosis in some patients.

Read the article "Role of Imaging in Bioresorbable Stent Procedures."

Absorb Does Not Perform Well in Smaller Vessels

The trial’s protocols specified that only vessels 2.5-3.75 millimeters in diameter should be included in the study. However, the protocols allowed clinicians to assess vessel size based on visual assessment from a coronary angiogram, which is less precise than a method known as quantitative coronary analysis. As a result, 19 percent of patients included in the trial received treatment for vessels that were smaller than is currently recommended (less than 2.25 millimeters as measured by quantitative coronary analysis, which equates to roughly 2.5 millimeters as assessed visually). These patients had significantly poorer outcomes than those whose treated vessels were at least 2.5 millimeters in diameter, and a sub-analysis excluding these patients showed Absorb BVS to be no longer significantly worse than metal stents at two years in terms of target lesion failure.

In addition, the original study protocols did not specify the use of certain procedural techniques that have since been shown to improve outcomes with the Absorb BVS. A separate trial, ABSORB IV, is currently enrolling patients for further insights on outcomes from the use of Absorb BVS. A preliminary analysis from Absorb IV, which includes refined procedural techniques and stricter adherence to recommendations with regard to vessel size, suggests proper use and placement of the Absorb BVS may be associated with a considerable reduction in risk.

Ellis said the stent struts are very thick, comparable to the Cypher stent for a decade ago. He said this causes hemodynamic issues with smaller vessels, leading to target lesion failure.

The trial is the largest to assess long-term outcomes from the Absorb BVS, which is the first stent designed to fully dissolve after being placed in a coronary vessel. Study investigators cautioned that, although they offer important insights, the trial’s two-year results cannot definitively show whether the dissolving scaffold reduces long-term adverse events compared with a permanent metal stent because the scaffold is not yet fully dissolved in most patients until year three.

Value of Absorb Believed to be After the Stent Dissolves

One of the issues with metallic drug-eluting stents is the incidence of long-term issues in some patients related to restenosis or late-stent thrombosis, due to the stent or the drug carrier polymer retained in the vessel wall. The purpose of a dissolving stent is to eliminate both of these factors when the stent disappears after three years, potentially leading to better long-term outcomes.

“The value proposition of the Absorb BVS is that once the device is fully dissolved after three years there will be better long-term outcomes, but there are as of yet no long-term, large studies available to show that,” Ellis said. “The superiority of the Absorb BVS is not likely to emerge before the bioresorption process is completed after approximately three years.”

In collaboration with FDA, a landmark analysis combining Absorb III and Absorb IV has been extended to further evaluate the effectiveness and short- and long-term benefits of Absorb BVS. The landmark analysis will start three years after device implantation, when the BVS is expected to be fully absorbed, and will follow patients for an additional four to seven years.