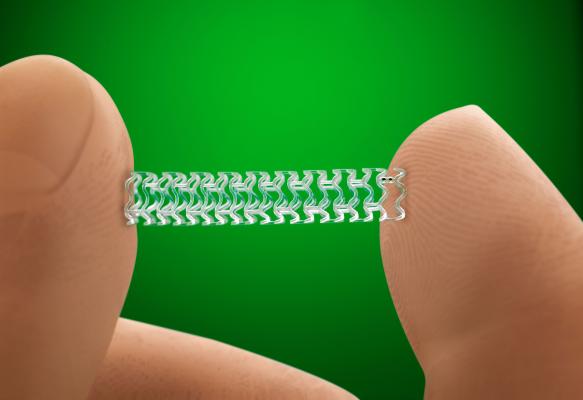 The Abbott Absorb is the first bioresorbable stent to be cleared for use in the United States. 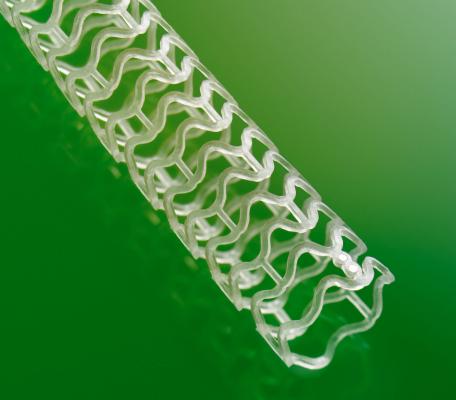 The Absorb is not made of metal, so it is more difficult to visualize on angiographic X-ray during deployment. For this reason it has two radio opaque metallic markers at each end.

Unlike the current standard metallic stents, the Absorb stent is made of naturally dissolving polylactic acid (PLA), similar to dissolving sutures. Absorb disappears completely in about three years. Metal stents are permanent implants that restrict vessel motion for the life of the person treated, but clinical studies of the Absorb have shown treated vessel segments return to natural vasoconstriction and vasodilation after the stent dissolved. However, the clinical impact of a disappearing stent and returning normal vasomotion is still being studied.

"The Absorb bioresorbable scaffold represents a major advance in the treatment of coronary artery disease," said Gregg W. Stone, M.D., FACC, FSCAI, director, cardiovascular research and education, Center for Interventional Vascular Therapy, Columbia University Medical Center, New York-Presbyterian Hospital, and the chairman of the ABSORB clinical trial program. "This novel technology appeals to both physicians and patients alike because after treating the underlying blockage it is completely absorbed, leaving nothing behind. No metal means the treated artery can pulse and flex naturally as demands on the heart change with everyday activities. No metal may also reduce the potential of future blockages that occur with permanent metallic stents, and allows easier access to other treatment options should they prove necessary in the patient's future."

Abbott plans to offer the Absorb device to hospitals in the United States, starting with interventional cardiology centers that participated in Absorb clinical trials.

The FDA issued a rare press release about the approval, which are usually only sent when cutting edge technologies are first introduced. “The FDA’s approval of the Absorb GT1 BVS (Bioresorbable Vascular Scaffold) offers a new treatment option for individuals who are candidates for angioplasty, but would prefer an absorbable device rather than a permanent metallic coronary stent,” said Bram Zuckerman, M.D., director of the division of cardiovascular devices at the FDA’s Center for Devices and Radiological Health.

The Absorb is a drug-eluting stent (DES), releasing the drug everolimus to limit the growth of scar tissue. The stent is difficult to see during deployment under angiography X-ray, so it has four very small platinum markers, delineating the ends of the stent. After absorption of the stent, these markers are embedded in the walls of the artery to identify where the Absorb GT1 BVS was originally placed.

In clinical studies conducted around the world, the Absorb bioabsorbable stent demonstrated comparable short-term and mid-term outcomes to the leading metallic stent — Abbott's Xience drug eluting stent. At one year in a pre-specified group of approximately 2,000 U.S. patients in the pivotal ABSORB III randomized clinical trial, patients who received the dissolving Absorb stent experienced comparable rates of specific adverse events in the intended patient population (reference vessel diameter of ≥ 2.5 and ≤ 3.75 mm) — including heart disease-related death, heart attacks attributed to the stented artery and repeat procedures due to target lesion failure as compared to patients who received the metallic Xience stent.

Watch a video interview with Dean Kereiakes, M.D., medical director of The Christ Hospital Heart and Vascular Center, and a lead investigator for both the ABSORB and SYNERGY stent trials, discussing the latest developments in bioresorbable stent technology.

In March, an independent panel of experts convened by the FDA voted 9 to 0, with one abstention, that the benefits of Abbott's Absorb fully bioresorbable drug-eluting coronary stent outweigh the risks.

The Abbott Vascular Absorb stent, sold commercially as the Absorb GT1 BVS system, is now available in more than 100 countries, including the United States, and has been used to treat more than 150,000 patients with coronary artery disease worldwide.

The FDA said possible adverse events that may be associated with the implant procedure or with the Absorb GT1 BVS itself include allergic reactions to materials in the device or medications used during the procedure, allergic reaction to the drug everolimus, infection or irritation at the catheter insertion site, internal bleeding, the development of abnormal connections between arteries and veins, embolism, or other coronary artery complications that may require medical intervention and that could lead to death.

The FDA-cleared Absorb GT1 BVS is contraindicated for patients who have a known hypersensitivity or allergy to everolimus or the materials used in the device, such as poly(L-lactide), poly(D,L-lactide) or platinum. It is also contraindicated for those who are not candidates for angioplasty, have sensitivity to contrast, or who cannot take long-term aspirin therapy along with other antiplatelet agents.

Many cardiology experts see bioresorbable scaffolds as the next step in the evolution of stent technology. Many believe they may offer a change in the standard of care, replacing metallic DES. However, there are barriers to this happening, including justifying the high cost of these stents and reduced deliverability compared to metallic stents.

While removing the permanent metal caging of a vessel and returning vessels to normal vasomotion are seen as positive features of the technology, no clinical evidence exists showing that it makes any difference in real-world outcomes, said Daniel Simon, M.D., division chief, cardiovascular medicine, UH Case Medical Center, president of the UH Case Medical Center, and a co-investigator in the Absorb trials. He said the FDA panel took a sort of limited, non-inferiority approach to the device in regard to target lesion failure, but he said there are many questions that remain about stents that dissolve that will need to be answered before they become a workhorse device, replacing metallic drug-eluting stents (DES).

“The question we should be asking is what the clinical performance of the device is and how will it be used by physicians in clinical practice,” said Simon. “No one knows what the clinical benefit of a bioresorbable stent is. They do return the vessel to a normal state of vasomotion without caging the vessel, but there is no clinical data yet showing this actually helps patients’ long-term outcomes.”

This clinical question, combined with the device’s delivery issues and its high cost, have restricted its use in Europe. “In Europe, the Absorb is a niche device and it is not being used as a workhorse stent,” he said, explaining it is likely the stent will find similar limited, niche use in the United States.

While Simon agrees the device is a major step forward in stent technology, he said the technology needs to overcome several issues. To start, the device costs more than a metallic stent and it is more difficult to navigate and deploy because its struts are thicker than the current metallic DES. He said it also requires more imaging than metallic stents, adding procedure time and exposing the patient to more X-ray dose. Accurate vessel sizing is also more critical than metallic stents, because overexpansion causes stent fractures much more easily. More lesion preparation is usually required with the Absorb and procedures usually require more disposables than metallic stenting. The dissolvable stents also require more dual-antiplatelet therapy and for a longer period of time due to higher stent thrombosis rates, Simon explained.

Stone said the first generation device does have limits, particularly in small vessels of 2.5 mm or smaller, where it had higher rates of in-stent thrombosis in the pivotal Absorb III trial. That trial showed safety and efficacy non-inferiority for the Absorb compared to the Xience V stent. But, data analysis found a sub-group of patients with vessels smaller than 2.5 mm that were stented where there was a cause for concern. Stone presented this sub-group analysis at the 2016 American College of Cardiology (ACC) meeting in April.

“There were some slight trends toward worse adverse event outcomes with the Absorb scaffold,” Stone said. “We saw non-significant trends in scaffold thrombosis and increased target vessel myocardial infarction. So, we did a detailed analysis of these events to see where they might be coming from. One of the big differences between devices and metallic drug eluting stents is that they are thicker, so we suspected that in smaller vessels the struts would occupy more space, which could lead to blood turbulence and increased platelet deposition. It turned out about 19 percent of patients had this device used in vessels smaller than 2.5 mm, the smallest size the Absorb was intended for. And, sure enough, those where the vessels where the scaffold thrombosis and target lesion MI events tended to cluster, whereas the other 80 percent of patients who had the right sized vessels for Absorb, the outcome rates were very similar between Xience and Absorb.”

To address some of the unanswered questions regarding bioresorbable stents, the ABSORB IV Trial will begin recruiting patients in 2016. This large, randomized trial will include 5,000 patients and is powered to show late superiority of Absorb compared to Xience. Stone said the earliest results might be presented in 2020. He also said another trial is gearing up to test the Absorb in ST-elevated myocardial infarction (STEMI) patients, which he said might be a sweet spot niche for bioresorbable stents.

“If those trials are positive, then I think bioresorbable technology will ultimately be used in the majority of patients,” Stone said.

Read the article "Bioresorbable Stents Are the Way of the Future," which offers insights into bioresorbable technology in development and the positives of the techology. 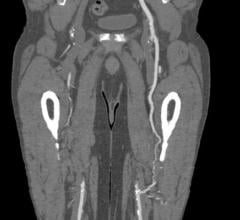 October 11, 2022 — Efemoral Medical, developer of advanced interventional bioresorbable therapies, announced that it has ... 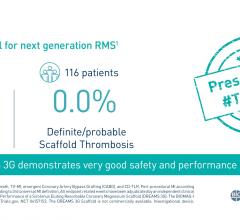 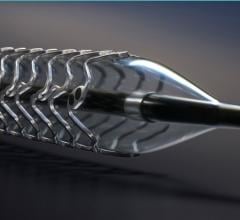 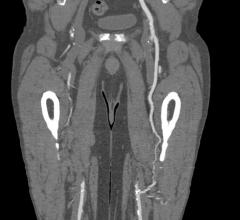 December 16, 2020 — Efemoral Medical announced the first-in-human (FIH) use of the its Efemoral bioresorbable vascular ... 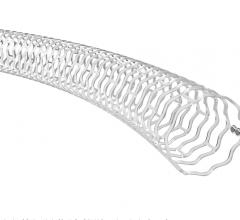 September 3, 2020 — Abbott today announced the start of the LIFE-BTK clinical trial to evaluate the safety and ... 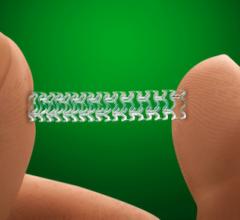 November 7, 2019 — Although the Abbott Absorb fully bioresorbable drug-eluting stent (DES) was taken off the market due ... 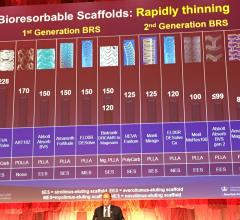 Bioresorbable stent (BRS) technology is not dead, but the unbridled enthusiasm seen two years ago for the technology has ... 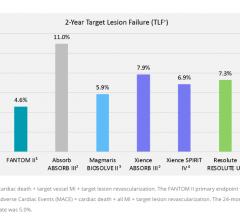 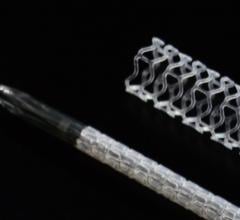 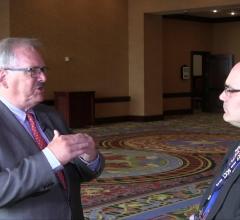