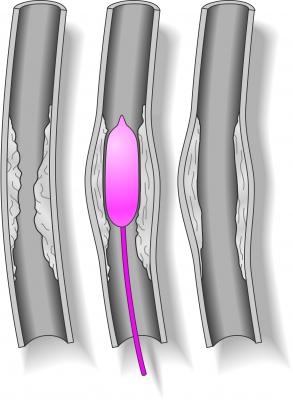 December 28, 2012 — Some stroke patients may benefit from cerebral angioplasty and stent placement, according to a new clinical study published online in the journal Radiology.

“As many as 70 percent of ischemic stroke patients could have positive clinical outcomes with the additional use of intra-arterial revascularization using stents,” said Martin Roubec, M.D., Ph.D., a neurologist in the Comprehensive Stroke Center at the University Hospital Ostrava in the Czech Republic.

Ischemic stroke, the most common form of stroke, occurs when blockage in an artery — often from a blood clot or a fatty deposit due to atherosclerosis — interrupts blood flow to an area of the brain. According to Roubec, only a fraction of European patients experiencing an ischemic stroke are treated with a potentially life-saving drug that can dissolve the clot in a procedure called intravenous thrombolysis (IVT).

“Intravenous thrombolysis must be administered within four and a half hours of the onset of a stroke and cannot be used in patients who are taking anticoagulant medication,” said David Školoudík, M.D., Ph.D., associate professor at University Hospital Ostrava. “Because of these limitations, the majority of ischemic stroke patients receive no therapy at all.”

The study involved 131 acute ischemic stroke patients treated over a two-year period at two comprehensive stroke centers in Ostrava and Olomouc. The patients, including 74 men and 57 women (mean age 65.8), all had a blockage in the middle cerebral artery detected by computed tomography (CT) or magnetic resonance imaging (MRI).

Seventy-five patients were treated with IVT; 26 (35 percent) of whom achieved a favorable three-month outcome. The remaining 49 patients, for whom IVT failed to re-open the blocked artery, received either cerebral angioplasty/stent placement or no additional therapy.

To perform the revascularization procedure, the physicians used an imaging technique called digital subtraction angiography to visualize the blood vessels and a guidewire to maneuver a balloon-tipped catheter to the location of the blockage in the middle cerebral artery. Once the balloon was inflated, deflated and withdrawn, a stent was inserted to help the artery remain open. Patients with a favorable three-month outcome following the procedure were able to live independently and perform normal daily activities.

“We demonstrated that in patients with middle cerebral artery blockage after IVT failure or for whom IVT is contraindicated, revascularization with stents is superior to providing no further therapy,” Roubec said.