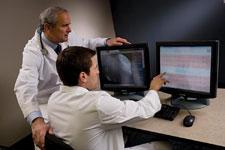 To computerize old paper ECG waveforms, Agfa converts the scanned copies into an optical character recognition (OCR) format, which can then be translated into an HL7 format. 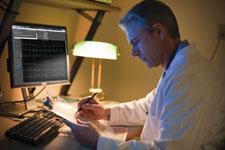 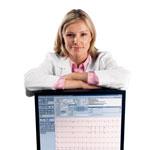 GE Muse is one of the most popular ECG management systems on the market, partly because many hospitals use GE ECG machines. Choosing ECG devices and management software from the same manufacturer is one solution to overcome connectivity issues.

Converting from paper-based electrocardiogram (ECG) files and reports to an electronic record system, or switching to a new electronic system, can improve workflow efficiency and speed the process of getting patients their test results. However, as with most health IT solutions, experts say there are no “out of the box” solutions, and every system will have interoperability bumps in the road.

Below are several things to be aware of when searching for a new ECG management system.

No Standard Data Formats
Unlike imaging and healthcare IT, which adopted the DICOM and HL7 data format standards, ECG vendors never agreed on a standard for waveforms. The result is an array of file formats for ECGs, including DICOM, XML, TIFF, JPEG, GDT, PDF, ZIP, DVD and others. The variety of formats causes interoperability issues when attempting to save ECGs to a PACS.

“There is no industry standard for waveforms,” said Les Campbell, product manager with ScImage. “Radiology does very well in this space with DICOM worklists, but cardiology, with all its waveforms, does not do so well.”

He suggests before purchasing, hospitals should ask ECG system vendors what formats are used to save waveforms. It is also a good idea to find out what formats are accepted by a current or planned ECG management system to ensure good interoperability.

Mortara standardized on the DICOM imaging format for its ECG and stress test waveforms. Philips, Cardiac Science and others offer optional conversion into DICOM formats with the use of a Datamed ECG translator, commonly referred to as an "Osborne Box," named after its creator. The use of the DICOM format enables easy compatibility with picture archiving and communications systems (PACS) and most cardiovascular information systems (CVIS), which are designed around DICOM data.

Some systems will interface text data using an HL7 interface, but the reports and waveforms are usually saved in a different format. Several vendor-neutral ECG management systems standardize on extensible markup language (XML) file formats. Agfa converts old ECGs into an optical character recognition (OCR) format, which can then be translated into an HL7 format. McKesson converts ECGs into XML files, since DICOM can be converted into XML. However, the reverse is not true.

Several PACS and CVIS vendors, including ScImage, avoid the use of PDFs to collect sample waveforms. Campbell said the Adobe program used to create PDFs adds a border and squeezes the image, making it difficult to discern some details, such as tiny P-waves. Due to its vendor-neutrality, PicomECG is used as a third-party software by other vendors, including Siemens cardiovascular IT solutions.

Workflow is Key
It is hard to differentiate most ECG management systems today, said James E. Tcheng, M.D., director of the Duke Transitional Medical Institute (DTMI) Biomedical Informatics Core, professor of medicine, professor of community and family medicine (informatics) at Duke University, Durham, N.C. He said the real difference is how easy the system is to operate and its ability to save staff time. He said a system needs to be intuitive, so if a vendor says it needs to bring in special trainers to teach seasoned staff to use it, there might be an issue.

“The things today that make or break a system are not how well the system reads ECGs – we compared vendors and their algorithms are all about the same – it’s the workflow issues,” Tcheng said. “In 2011, you should not have to bring in an expert to explain to physicians how to use a Windows interface.”

Duke’s ECG management system from a large vendor worked fine 90 percent of the time with good connectivity, but it is not enough if the system is slow or hinders a smooth workflow. He explained the system did not work with wireless connectivity, which was needed to connect cardiologists who use Macintosh computers. The system also required too many clicks, and access via the Web was very slow, which reduced the physicians’ productivity. Also, once a worklist was accessed on the Web, it was different than on a networked computer, so physicians had to learn how to work using two different worklist systems.

Single-Vendor Connectivity Solutions
For all the above-mentioned reasons, Tcheng said Duke decided to convert to a single vendor providing both the ECG machines and a management system. Ideally, hospitals should be able to pick best-of-breed systems and connect them to whichever management system they want, but he said the IT headaches became too much for Duke to contend with. By using a single vendor (in this case, GE Healthcare), he said the machines and the management system are pre-tested by the vendor to work out connectivity issues.

“We are solving the connectivity problem by just replacing all the machines with GE ECGs and going to the GE Muse ECG management system,” Tcheng said.

Going Paperless
In 1991, Winchester Medical Center in Winchester, Va., began a conversion from paper to an electronic ECG management system. Since the hospitals had standardized on Cardiac Science ECG, stress and Holter monitoring devices, they adopted the vendor’s Pyramis ECG data management system. However, since the existing ECG files were paper, it took about seven years before the system was completely on an electronic format, said Cindy Guerin, CCT, cardiovascular system administrator for The Heart and Vascular Center at Winchester. The hospital previously kept paper ECGs for five years, so eventually the older paper files were purged.

“We were completely file cabinet and paper before and it was terrible, because the only person who could see an ECG was the person who was actually holding the paper,” Guerin said.

Previously, paper reports and ECGs were filed in a central location. If someone needed an ECG immediately, they had to physically go there to see the paper readout file. The other option was to call and request documents.

“Since we adopted the system, we have cut down significantly on the number of calls,” Guerin said.

Prior to adopting Pyramis, paper ECGs were hand-annotated and a dictation system was used that later needed to be transcribed into typed notes. Today, most dictation has been eliminated with physicians entering information directly into reports, which speeds turn-around time and cuts costs for transcription services.

Also, when comparing waveforms to previous ECGs, a previous paper ECG had to manually be pulled from file cabinets. If a physician was in a remote office or another hospital, the paper waveforms had to be faxed, which used large amounts of paper and toner. Today, Guerin said all ECGs, current or previous, can immediately be called up and compared side-by-side on screen.

Web Allows Greater Access
Ten years ago, Winchester Medical Center’s ECG system was more efficient than the paper system, but Guerin said its use was limited to dedicated workstations. However, with upgrades to current Web-based technology, the Pyramis system now allows access anywhere in the medical center. Guerin said physicians now can access and edit ECGs and reports using a secure, remote access portal. The Web-based ECG system also allows one system to be used for five other sister hospitals that are a part of the healthcare network.

“If a doctor at another hospital needs a patient’s previous ECG, they don’t have to wait for a disk, courier or the mail,” Guerin explained.

Guerin said the medical center uses software that converts these ECGs so they are compatible with the Pyramis system for filing and immediate physician access. She said this allows cardiologists to review the waveforms during late-night emergencies without having to leave home and go to the hospital. They can then determine if it is a STEMI, and the cath lab can be activated before the patient arrives at the ED.

Resistance to a New System
As with most changes in technology or workflow, it is not always embraced with open arms. “It was not an easy transition,” Guerin said. “It was a rough road at first.”

While some physicians immediately learned to use the computerized system, others waited until they were forced to use it when paper was no longer kept on file. After physicians and techs became familiar with the system, she said they realized it could save them a lot of time.
“Now if I took it away, the physicians would kill me,” Guerin said.

Integration With PACS
There are still some patches needed to make the system work completely as intended because of the need to interface two disparate systems. Guerin said this is the case with stress test billing. It does not interface completely because it is also connected with nuclear cardiac imaging, which uses a different reporting system wired through the medical center’s Philips Xcelera PACS. She said ECGs are sent separately to the PACS for integration into the reports, but they hope to patch the systems for better connectivity in the future.

VIDEO: Use of MitraClip as a Bridge to Heart Transplant