A clinical summary of the current knowledge linking thyroid conditions and cardiovascular disorders. 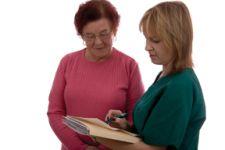 Thyroid hormone has multiple effects on the cardiovascular system. These include increased cardiac contractility, increased cardiac output, decreased systemic vascular resistance and electrophysiological and pro-angiogenic effects.[1-4] The cellular and molecular mechanisms that have been proposed for these effects include genomic and non-genomic (extranuclear) actions. The active form of thyroid hormone, triiodothyronine (T3), enters the nucleus and binds to the specific nuclear receptors (TRa or TRß). The T3-receptor complex then binds to thyroid hormone-response elements (TREs) in the promoter regions of specific target genes and modifies their expression.[5] These are genomic effects. The more rapid, nongenomic effects include the regulation of membrane ion channels and pumps and may involve the activation of several signaling pathways, including protein kinase C (PKC), mitogen activated protein kinases (MAPKs) [6,7] and Akt.[8]
It has long been recognized that increased or reduced thyroid hormone activity may produce cardiovascular disorders. The prevalence of hypothyroidism (4.6 percent of the U.S. population, 0.3 percent clinical and 4.3 percent subclinical) is higher than hyperthyroidism (1.3 percent of the U.S. population, 0.5 percent clinical and 0.7 percent subclinical), higher in females than in males, and increases with age,[9] suggesting that low thyroid conditions could merit more concern.

Overt hypothyroidism can cause cardiac abnormalities. The most common findings are bradycardia, mild hypertension with narrow pulse pressure and attenuated activity on precordial examination.[2] Systemic hypertension, observed in some hypothyroid patients, is due to increased peripheral vascular resistance and arterial stiffness.[10] Abnormal ECG, including QTc prolongation and flattening or inversion of the T wave can also be found.[11,12] This may increase the possibility of ventricular arrhythmias, and in fact, hypothyroidism-related torsades de pointes has been reported.[11,13] Another cardiac abnormality includes the impairment of LV diastolic function characterized by slowed active myocardial relaxation and impaired early ventricular filling.[14]

While hypothyroidism is known to cause systolic dysfunction and LV chamber dilatation, it was not clear if hypothyroidism alone can lead to heart failure. This is not such a simple question to answer since hypothyroidism can lead to cardiac unloading, which is not the same thing as pump failure. To answer this question, we treated rats with the anti-thyroid drug PTU for six weeks and one year. After one year of hypothyroidism, rats had severe LV systolic dysfunction and chamber dilatation despite cardiac atrophy. Chamber dilatation was due to excessive myocyte lengthening from series addition of sarcomeres, a key change associated with heart failure.15 This cellular change is opposite that of cardiac unloading from a left ventricular assist device (LVAD) where series removal of sarcomeres occurs.16 Perhaps more interesting was a dramatic 40 percent reduction in the concentration of arterioles, which had occurred within six weeks of PTU administration. Cumulatively, these data make a strong case that chronic hypothyroidism alone can lead to overt heart failure.15 Additionally, serum hormone levels indicated mild hypothyroidism, suggesting that similar changes could be present in borderline low thyroid disorders.

Subclinical hypothyroidism (SH), defined by elevated serum TSH levels (greater than 10µIU/ml) with normal levels of serum T3 and T4, is more common than overt hypothyroidism, especially among women above 60 years of age.[17] This condition is also associated with cardiac abnormalities. Resting heart rate is usually normal in SH patients,[18-22] but impaired heart rate variability has been shown, indicating hypo-functional abnormalities in the parasympathetic nervous system.[20] Mean diastolic pressure is increased in patients with SH.[23] LV systolic function and diastolic function both at rest and during exercise are also impaired in SH patients.

SH is also associated with atherosclerotic cardiovascular disease. A significant reduction in flow-mediated vasodilation, a mark of endothelial dysfunction, has been reported in SH patients.26 SH patients showed a significant increase in factor VII activity (FVII:C) and the ratio of FVII:C/ factor VII antigen (FVII:Ag) reflects the presence of activated FVIIa, suggesting a hypercoagulable state.[27]

SH is associated with lipid metabolism disorders that are characterized by normal or slightly elevated total cholesterol levels, increased LDL-C and oxidized LDL-C, and lower HDL-C.20,[28] Such conditions may contribute to the greater prevalence of aortic atherosclerosis and myocardial infarction reported in elderly women.[29]

The relationship between SH and heart diseases is not unidirectional. Heart diseases may also alter the metabolism of thyroid hormones. Numerous reports from clinical and animal studies have documented altered thyroid hormone metabolism with low serum T3, T4, FT3 and FT4 levels, high serum rT3 levels and normal or low serum TSH levels shortly after myocardial infarction (MI), and normalization between one to four weeks.[30-35]

Congestive heart failure and major heart surgical procedures, such as cardiopulmonary bypass surgery, can also change thyroid function leading to “euthyroid sick syndrome.”36-39 The change of thyroid function in these patients may modify cardiac gene expression and cause cardiac functional impairment. Pronounced low serum T3 and T4 levels have been shown to correlate with a higher mortality rate and poor prognosis in patients after MI.[30, 32, 35]

The mechanisms underlying thyroid hormone metabolic disorders in heart diseases are not clear. However, a recent study indicated that overexpression of type 2 deiodinase (D2) — which converts T4 to T3 in the heart — can enhance cardiac contractility while preventing cardiac functional deterioration and altered gene expression after pressure overload.[40] Another study in hypertensive animals demonstrated cardiac up-regulation of the D3 deiodinase, which converts T4 to the deactivated rT3 metabolite.[41] These studies raise the possibility that thyroid hormone metabolism may be adversely altered in heart disease. Unfortunately, myocardial levels of T3 have never been reported for patients with heart disease.

Based on current findings, patients with heart diseases should undergo screening for hypothyroidism. In its 1998 guidelines, the American College of Physicians also suggests office-based screening to detect overt thyroid dysfunction in women older than 50 years of age.[42] But the treatment of borderline hypothyroidism with thyroid hormone is still controversial. Although there are a few reports indicating that such treatment might not help, most studies suggest that low dose supplementation of TH to restore euthyroid status in overt and subclinical hypothyroid patients might be beneficial. Studies have shown that TH treatment can normalize cardiac disorders, such as ECG changes and LV dysfunction,[22,43] increase HDL associated platelet-activating factor acetylhydrolase activity (potential anti-atherogenic effect),[44] reduce serum cholesterol levels[20] and prevent progression of angiographic coronary artery disease.[45]

Since over-treatment with thyroid hormones may lead to potential adverse effects on the cardiovascular system, such as increased heart rate and myocardial oxygen consumption, thyroid hormone analogs that may more safely induce beneficial effects in the treatment of heart failure and hypercholesterolemia have been developed. The most promising one is 3,5-diiodothyropropionic acid (DITPA), which binds to both the TRa1 and TRa2 with relatively low affinity. DITPA has been shown to enhance endothelial nitric oxide and ß-adrenergic-mediated vasorelaxation, stimulate arteriolar growth in noninfarcted myocardium and improve LV remodeling after MI.51,[52] A pilot study indicated that DITPA can improve LV diastolic function and decrease serum cholesterol and triglycerides levels in patients with moderately severe heart failure.[53] A clinical trial to evaluate the efficacy of DITPA in heart failure patients is now being conducted.

Clearly, more research is needed to better understand the pathophysiology and cellular and molecular mechanisms underlying adverse changes that may be associated with low thyroid function in heart disease. Such information will be helpful in determining when hormone supplementation is appropriate. 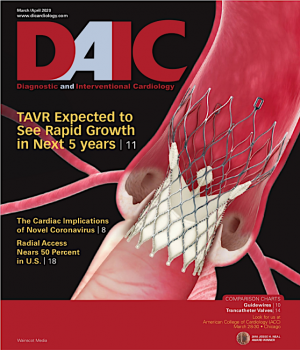 VIDEO: COVID-19 Precautions in the Cath Lab Guidelines from SCAI