Dissolving Stents May Offer New Options in the Next Decade 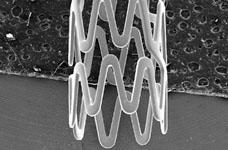 This is a prototype metalic stent being developed by Boston Scintific that is designed to bioabsorb through corrosion. The stent does not have FDA or CE mark approval. 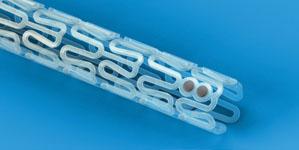 Abbott Vascular is the furthest along in development of a totally bioabsorbable stent with its BVS. The polylactic acid stent polymer stent has platinum markers incorporated into the struts at either end for visibility under X-ray. The Stent does not have 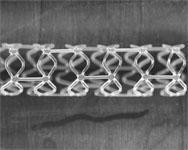 A prototype of an all polymer fully-absorbable stent being developed by Boston Scientific. The stent does not have CE mark or FDA approval.

Metal stents are foreign objects that can irritate vessels and cause stent thrombosis, prevent vessel remodeling, prevent future surgical interventions, can fatique and suffer strut fractures, and impair CT or MR imaging. For these reasons several stent manufacturers are working on biodegradeble stents that do not leave behind any hardware.

Read and updated article on where things are at with the development of the Absorb bioresorbable stent in U.S. trials in 2016 — "Questions Remain on Future of Bioresorbable Stents"

Read updated article about the first bioresorable stent approved by the FDA in July 2016.

Bioabsorbable stents will be among the biggest advancements in stent technology, said Alexandra Lansky, M.D., FACC, director of clinical services, center for interventional vascular therapy, New York-Presbyterian Hospital/Columbia University Medical Center, associate professor of clinical medicine at Columbia, director of the angiographic core analysis laboratories and director of the Women’s Cardiovascular Health Initiative at the Cardiovascular Research Foundation. Dr. Lansky is working with a manufacturer on a bioabsorbable stent and she said the technology is very promising.

“The challenge is maintaining the radial strength,” she said. “You have to keep the vessel open long enough to prevent renarrowing.”

She said the idea behind bioabsorbable stents is to prop open a vessel long enough to allow it to remodel with a larger lumen. But, she said there are issues with the polymers the stents are made from because they can recoil much more than a metal stent.

In 2002 the first-in-man biodegradable stent implants were made using the Igaki-Tamai stent. Initial results from the 64 patient study showed similar results to bare metal stents. However, as the stent dissolved and the struts weakened and the lumen recoiled, so development of the stent was dropped.

Today Abbott Vascular has picked up where that stent left off. It is the furthest along in development of a totally bioabsorbable stent with its Biodegradable Vascular Solutions (BVS) stent, made from polylactic acid (PLA). Since the stent cannot be seen under X-ray, it has platinum marker beads mounted in the struts at either end to aid visualization under X-ray. It can also be visualized using IVUS or OCT.
“We feel this is the future of coronary stenting,” said Chuck Simonton, M.D., Abbott Vascular’s chief medical officer and division vice president of medical science.

Simonton said the stent has two layers. The first contains the anti-proliferation drug that bioabsorbs in the first three months. The second is made of a harder crystalline matrix of PLA, which completely dissolves in about two years. He said the end result is an unobstructed lumen that is free of foreign bodies, allowing the vessel to remodel naturally. Once the stent dissolves, he said it will respond to vasodilators and vasoconstrictors.

“The opportunity we see is to design a polymer and build a stent with structural support like a metal stent,” he said. “It’s taken a lot of cooking in the kitchen to make a stent that works.”

Two-year data, including IVUS, IVUS-VH and OCT imaging, from the 30-patient, first-in-man ABSORB trial using the BVS were released at TCT 2008 and published in The Lancet in March. (1) There were no cases of thrombosis and no new major adverse cardiac events (MACE) between six months and two years. The purpose of the ABSORB trial is to assess the safety and performance of the BVS in patients with a single de novo native coronary artery lesion. Six-month results showed the stent had low in-stent late loss and low in-stent neointimal hyperplasia. Tests of artery movement and function appeared to show restoration of unstented movement after the stent dissolved.

The data seems to show the stent may offer a new standard of care in coronary artery disease, said John Ormiston, M.D., a principal investigator in the ABSORB trial and medical director at Mercy Angiography in Auckland, New Zealand, when the results were first released.

As with the Igaki-Tamai in 2002, vessel recoil was detected in the ABSORB trial during six-month follow-ups. However, Simonton said later follow-ups showed the lumen actually enlarged in about half the patients. He said it appeared the plaque volume actually decreased in the vessels rather than the vessels remodeling.

“These patients came back to us and what we were excited about is between six months and two years, the lumen got larger over time in many patients,” Simonton said. “This is something we will be looking at closely in future trials.”

The recoil issue is being addressed by tweaking the chemistry in the second-generation prototypes in hopes of boosting radial strength, Simonton said. These changes are incorporated in the next phase of the ABSORB trial to evaluate the safety and performance of the BVS. That phase began in March 2009 and will enroll about 80 patients at 10 centers in Europe, Australia and New Zealand. The first six-month follow-up angiogram data should be announced by the end of this year.

Based on the results of this trial, Simonton said it is possible Abbott could seek CE mark clearance in Europe. If no additional data is needed, he said the earliest a European approval might come would be 2012 or 2013.

Other Players with Totally-Bioabsorbable Stent Technology

When Boston Scientific purchased Guidant a few years ago, it included the rights to the same BVS technology Abbott is using. Dennis Fiedler, vice president in research and development at Boston Scientific, said the company is watching Abbott’s progress in trials before pursuing BVS development.

Boston Scientific also has rights to a California company that developed the REVA biodegradable stent, which uses tyrosine polycarbonate.

“It’s probably quite a ways in the future,” Fiedler said of seeing totally bioabsorbable stents being cleared by regulatory bodies. “We feel it has some issues with acute performance with what we see as a compromise.”

While he admits totally bioabsorbable stents will likely be the way of the future, current prototypes have very thick struts, which means it will not fit in some vessels that can currently be stented. The polymer struts also have issues with recoil.

For these reasons Fiedler said Boston Scientific is also developing metallic stents that dissolve through corrosion.

She said the company is planning further trials and may make it a drug-eluting stent before seeking CE mark approval in the next couple years. Ko said the metal stent dissolves in a couple months, as opposed to the polymer stents, which take much longer. She said Biotronik sees bioabsorbable stents as the next major leap in stent technology.

Medtronic said it is also developing a totally bioabsorbable stent that will be targeted for use in the SFA and peripheral vessels.