The focus on balloon angioplasty largely slipped from the interventional limelight a decade ago after the introduction of stents, but today there is some renewed interest with the advent of new balloon technology.

Two promising technologies include drug-coated balloons and cryo-plasty, both of which offer a fresh view on plain old balloon angioplasty. These systems put most of their emphasis on nonstent treatments for peripheral artery disease (PAD) below the knee where stents cannot be used. But, the technologies may also offer an alternative to the comorbidities of implanting stents, and in treating in-stent restenosis.

Peripheral artery disease (PAD) can be difficult to treat due to the small size of the vessels and because stent struts break under the torque vessels in limbs undergo on a daily basis. This is especially true of vessels below the knee where current stents can not survive.

In severe PAD cases where circulation is significantly reduced to the feet and legs, options are limited to arterectomy, angioplasty, surgical bypass or amputation. However, with transcatheter treatment, the small nature of these vessels makes them easy prey for restenosis.

“One of the biggest challenges, especially in peripheral artery disease, is restenosis. It’s a big problem,” said Bill Gerety, Boston Scientific senior product manager for cryoplasty. “There is no silver bullet out there... To date no one has ever stumbled upon the one, single technology that works in every situation.” For that reason he said cardiologists need a variety of options in their interventional tool box, he said.

No DEB system has been approved by the FDA, but there are now several systems available in Europe, including two that were approved earlier this year.

In January Invatec launched the IN.PACT Amphirion paclitaxel-eluting PTA balloon catheter, designed specifically to treat PAD below the knee. It features FreePac, a proprietary coating that frees and separates paclitaxel molecules and facilitates their absorption into the wall of the artery. In March Invatec announced CE-mark of the IN.PACT Falcon paclitaxel-eluting PTCA balloon catheter, which is one of the first drug-eluting balloons designed specifically to treat atherosclerosis in the coronary arteries.

There is a lot of interest in DEBs because they seem to offer an ideal solution in treating peripheral lesions where stents cannot be placed. Some cardiologists predict a revival of interest in nonstent DEB balloon angioplasty as a first choice treatment option, and leaving stents as a second option in case the vessel restenosis.

“What we see in the industry and what we develop is based on physician feed-back,” said Invatec co-founder Stefan Venturelli. “From what we hear there may be a paradigm shift... This technology has a lot of hopes, no matter who we talk to.”

One of the big issues with using a drug-eluting stent (DES) is its failure to elute its drug to the entire vessel wall, allowing areas for potential cell growth in between struts. Maximum stent coverage of a vessel wall is between 15-20 percent, where as a DEB is 100 percent,

“The drug-eluting balloon can be used as a stand alone therapy,” said Jack Springer, U.S. president of Invatec. Or, he said it can be used to expand a vessel and then a bare-metal stent can be placed in the same area. This will allow better paclitaxel coverage than a DES and without polymers that are believed to cause in-stent thrombosis.

“We have every intention of bringing drug eluting balloons to the United States,” Springer said.

Invatec plans to launch a randomized trial, the IN.PACT DEEP study, in the first half of 2009, to provide additional data about the effectiveness of this new treatment concept.

DEB for Treatment of In-Stent Restenosis

Drug eluting stents emerged as the treatment of choice, but DES present their own set of issues, including incomplete drug delivery to the vessel wall, areas uncovered by the stent, double metal layers in some areas, and side branch access is difficult or limited, said Martin Unverdorben, M.D., Ph.D., formerly M.D, Ph.D, an associate professor of medicine at the University of Frankfurt/Main, Germany, who was the principal investigator for the PEPCAD study for the B. Braun’s Sequent Please DEB, which is pending CE-mark. He joined the staff of B. Braun in December as director and corporate vice president of scientific affairs.

Dr. Unverdorben said DEB catheters developed in the late 1990s used a porous balloon where pressure drove the drug through the porous membrane. However, the high pressure jets caused damage to the vessels and the drug quickly washed out of tissue. The new generation of DEBs now use a drug-coating on the balloon.

B. Braun has developed PACCOCATH technology, which uses a spacer between paclitaxel molecules to create a matrix coating on the balloon. The spacer is made of iopromide, a commonly used contrast agent, which avoids possible artery reactions, as with polymers used to bind the drug to stents. Dr. Unverdorben said the balloon provides a large contact surface between the lipophilic drug and the vessel wall and aids rapid drug absorption. He said it also makes for a uniform and complete application of the drug after first balloon expansion. Other balloons may require multiple balloon expansions to properly elute their drug.

The SeQuent Please is a paclitaxel-eluting balloon that is inflated for about 30 seconds inside the narrowed artery, and the paclitaxel, which has a natural attraction to cells, quickly moves from the surface of the balloon into the arterial cells, said Dr. Unverdorben. The DEB avoids a second layer of metal inside the artery when treating in-stent restenosis.

Over the past couple years studies in Europe have shown the balloon appears to be more effective than a drug-eluting stent in treating an unwanted build-up of tissue inside a bare-metal coronary stent. After six months, the newly expanded artery remained more widely open within the stent after treatment with the paclitaxel-eluting balloon when compared to a paclitaxel-eluting stent, according to the Paclitaxel-Eluting PTCA-Balloon Catheter in Coronary Artery Disease II-In-Stent Restenosis (PEPCAD II-ISR) study. Additional data suggested that at one year, rates of major cardiac events were also lower with the drug-coated balloon.

The PEPCAD II study the SeQuent Please was compared to another manufacturer’s DES in 131 patients over six months. The team evaluated restenosis after a cardiac procedure, and the rate of major adverse cardiac events (MACE) such as heart attack, bypass, repeat stenosis, or death. The study showed patients treated with the drug-eluting balloons experienced only 3.7 percent restenosis and 4.8 percent MACE, as compared to patients with DES, where restenosis was 20.8 percent with 22 percent MACE rate.

“We saw superior clinical outcomes,” he said. “Compared to drug-eluting stents the drug-eluting balloon was superior in preventing restenosis.”

From his experience, Dr. Unverdorben said DEBs would be his first option in treating restenosis, especially for in-stent restenosis.

Dr. Unverdorben said several studies have shown DEB treatment can reduce the amount of anti-platelet therapy needed following procedures. He said only four weeks of Clopidrigel is needed with DEB, where as six months is needed with DES. He said as of yet there have been no reported cases in any study of thrombosis related to target lesions treated with DEB alone.

B. Braun expects to receive CE-mark in the European Union this spring, and hopes to gain FDA approval in the U.S. around 2011.

Dr. Unverdorben said B. Braun is also already developing follow up products to compliment the Sequent Please. “We have no reason to believe one device fits all,” he said.

There are other DEBs on the market or in development and each has a unique paclitaxel delivery system.

The Dior DEB catheter made by EuroCor was the first DEB to earn CE mark in 2007. It has paclitaxel inbedded in its microporous balloon surface. It needs to be inflated for one minute to release all of its drug. The safety of Dior for coronary artery bifurcations was demonstrated in the DEBIUT (Drug-Eluting Balloon in Bifurcation Utrecht) Registry. But, Dr. Unverdorben said no followup angiographies were performed and up to 25 percent of patients experienced restenosis.

Swiss manufacturer Acrostak offers the Genie catheter, which has two small balloons at the distal and proximal ends of the device that are inflated under low pressure and the occluded area is flushed with Paclitaxel. The company said after an exposure of two minutes to liquid paclitaxel, studies have shown that the growth of the stenosis cells is permanently inhibited. Dr. Unverdorben said the catheter is complex to use and requires a large crossing profile.

Cook is currently recruiting patients for its Advance 18 PTX paclitaxel-coated balloon catheter trial to study its safety and effectiveness in treating PAD in the superficial femoral artery (SFA) and popliteal artery using a balloon. The study will enroll 100 patients who have at least one de novo or restenotic lesion with more than 70 percent stenosis documented angiographically of the SFA or popliteal artery. The study, conducted at the Heart Center Leipzig/Park Hospital in Leipzig, Germany, is expected to be completed sometime in 2011.

Aachen Resonance GmbH offers the Elutax DEB for sale in Europe. It’s drug is carried in pores on the balloon surface.

Other companies that are known to be developing DEBs include DSM Biomedical, Genesis Technologies LLC, Lutonix Inc., Possis Medical, and Micell Technologies 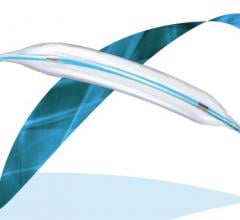 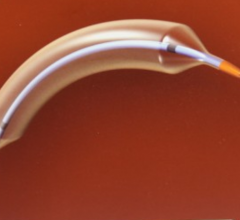