Virtual reality, ultrasound as a therapy and new guidelines top the list 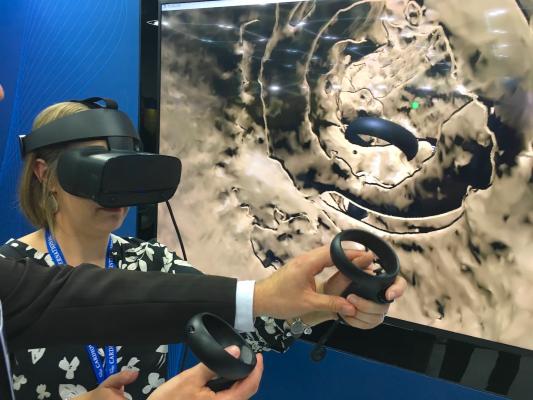 A virtual reality demonstration by TomTec, showing how VR can be used to review complex 3-D anatomy and make more accurate measurements on cardiac imaging.

Here is an overview of the hot topics and new technology trends in cardiovascular ultrasound from the 2019 American Society of Echocardiography (ASE) meeting. 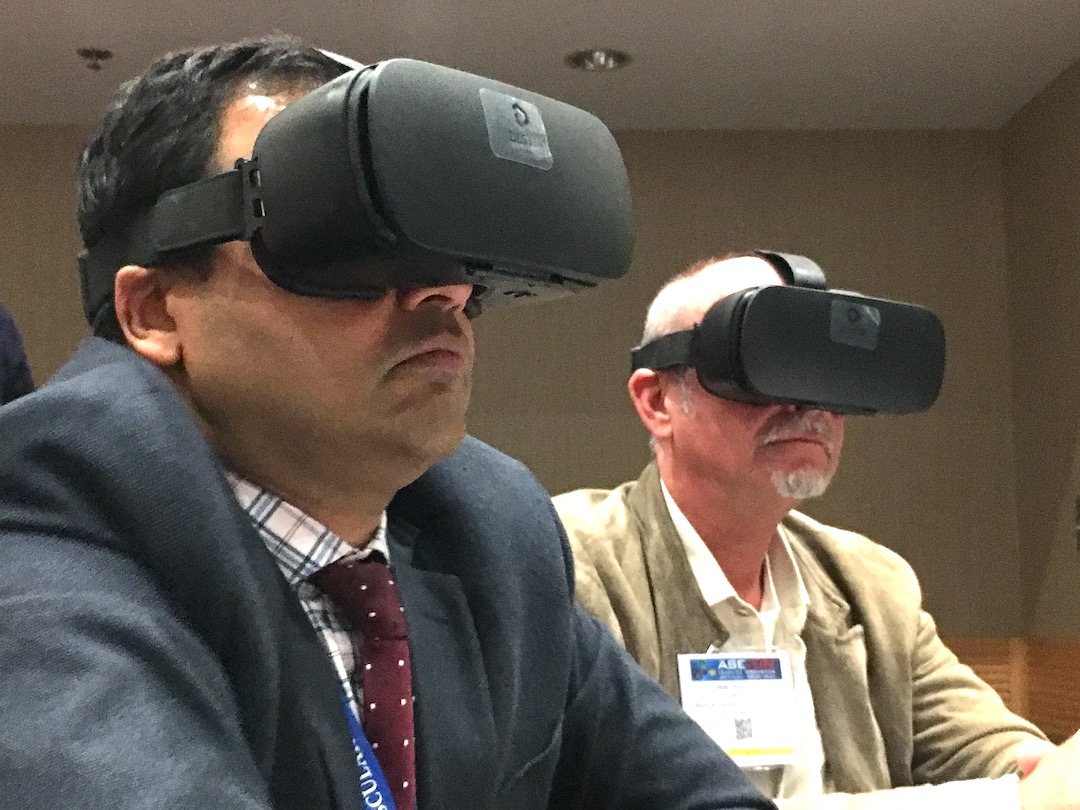 TomTec unveiled a work-in-progress virtual reality (VR) system at ASE 2018 and had further refined this technology over the past year. The company has been working the past three years with Roberto Lang, M.D., director of cardiac imaging at the University of Chicago, to develop this system that allows users to edit 3-D computed tomography or echo image datasets in a true 3-D view. It is interactive, allowing the the reviewer to use wireless hand controls to rotate images, slice through the 3-D renderings, and swap back and forth between 2-D and 3-D images that are fused, so they appear in the same viewing plane. Measurements also can be made while working in true 3-D, which the vendor and Lang say makes the tracing of valve orifices or myocardial borders more accurate.

While this technology may not be reasonable for daily use in all cases, Lang said it will likely have a niche use in complex structural heart disease cases. He said it can be used for more reliable device sizing and to help the surgeons or interventional cardiologists better understand the anatomy for preplanning before a procedure. It also may have application in pediatric congenital heart disease.

Lang and TomTec hosted a couple live, hands-on training sessions with the technology at ASE. Doctors attending the sessions were able to view how images can be edited and reviewed using VR headsets, rather than the traditional overhead screens. The hands-on demonstration of this technology in the TomTec booth at ASE 2018 and 2019 was one of the most popular exhibits with attendees both years.

Watch an interview with Lang and see examples of this technology in the VIDEO: Use of Virtual Reality to Review Structural Heart Imaging Exams.

Read more about this technology in Top Technology Trends in Echocardiography at ASE 2018.

Ultrasound With Contrast Revascularizes 50 Percent of Patients in Study 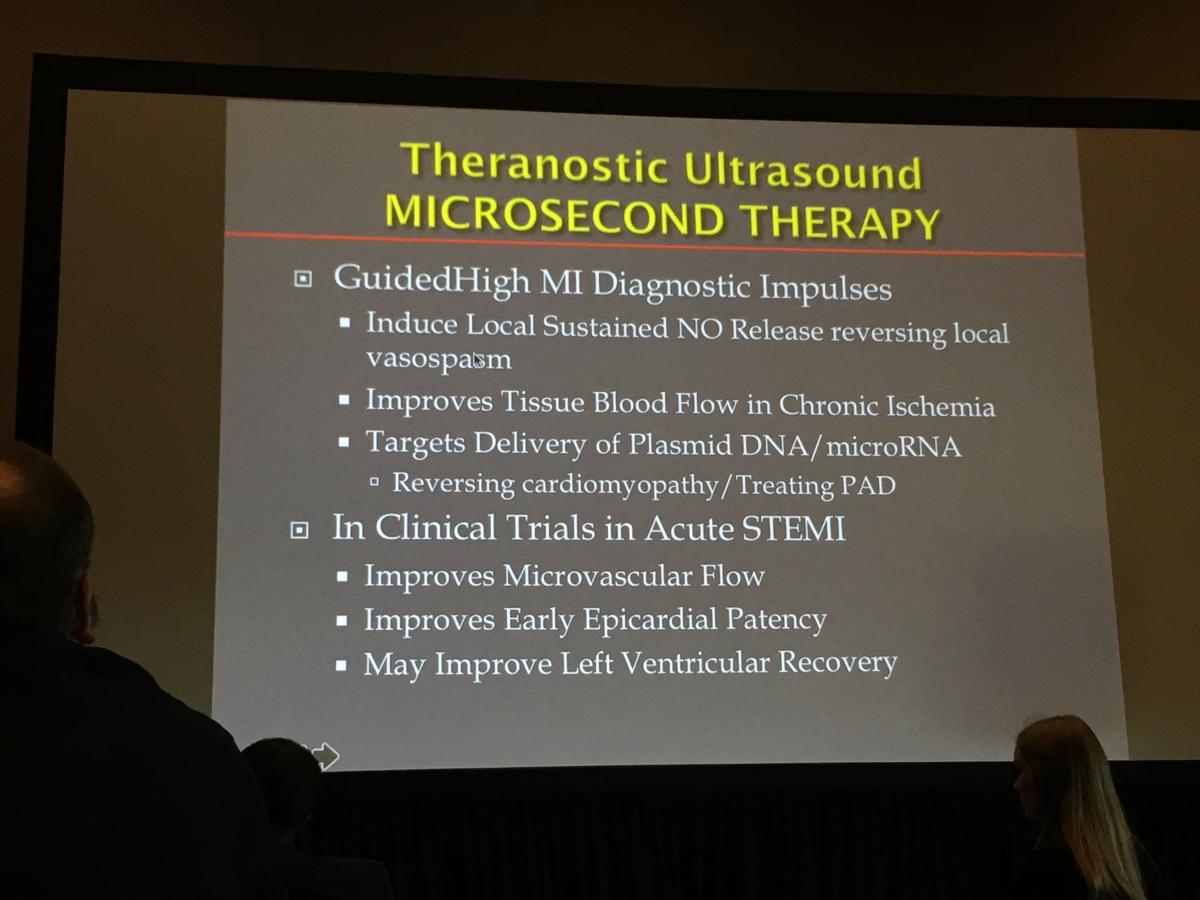 The most talked about study presented at ASE 2019 was a Brazilian trial that used ultrasound imaging combined with commercially available bubble contrast to revascularize patients with ST-elevated myocardial infarction (STEMI). The study used this approach in about 100 patients and was recently published in the Journal of the American College of Cardiology (JACC).  The premise is that bubble cavitation caused by the contrast bubbles bursting under a beam of high powered ultrasound impulses works to mechanically break up the clot and restore blood flow to blocked vessels.

Thomas Porter, M.D., FASE, the Theodore F. Hubbard Distinguished Chair of Cardiology and a professor of medicine at the University of Nebraska Medical Center, helped with this study and gave an update on this new potential therapeutic direction for ultrasound at ASE 2019. Porter said about 50 percent of patients in this study had their ST resolved by the time they made it to the cath lab for percutaneous coronary intervention (PCI). Two more studies in Amsterdam and Pittsburgh are now starting to see if this technique can be used while transporting patients in an ambulance to further improve heart attack outcomes and to reduce infarct size. He said the technology might have application to aid PCI no-reflow patients as well.

Porter also explained recent research that shows ultrasound pulses promote the release of adenosine triphosphate (ATP) molecules and nitric acid production. Both of these factors had a lasting beneficial effect on small vessel perfusion in the area treated, and down stream from where the pulses were used, for hours after the application of the transducer.

Watch an interview with Porter in the VIDEO: Ultrasound With Contrast Revascularized 50 Percent of Patients Prior to PCI in Study.

Watch another earlier interview with Porter in the VIDEO: Therapeutic Applications for Contrast Ultrasound. 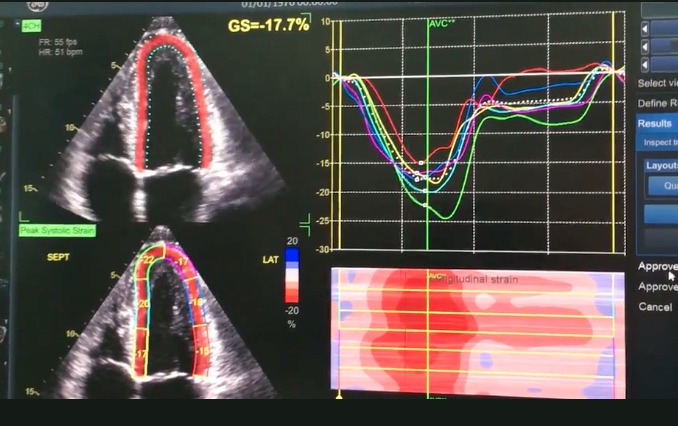 Artificial intelligence (AI) has been the hottest overarching topic across medicine the past two years and it is already in commercial use in numerous cardiac ultrasound systems from several vendors. The current AI-enabled echocardiography systems help speed workflow by auto identifying the cardiac anatomy, creating automated quantification, automated ejection fractions and mitral valve regurgitation PISA scores, and the ability to view 3-D datasets and pull out the optimal views for auto measurements to eliminate inter-operator variability.

Here is a quick VIDEO example of the AI features integrated into GE Healthcare's Vivid E95 system to help automate and speed workflows.

The next generation will do more with the image data, where currently only a small amount of it is processed to create images. As computer processing speeds continue to increase rapidly, more of the ultrasound data will be able to be processed in real time, and AI will play an increasing role. This may include AI review in the background of the system for radiomic markers for early stage disease or risk factor quantification that are not evident to the human eye.

Massachusetts General Hospital in Boston is developing AI applications to help improve image quality and speed workflow in cardiac ultrasound. Judy Hung, M.D., director of echocardiography, Division of Cardiology, Massachusetts General Hospital, has been involved in this project and spoke about it in this interview, VIDEO: Artificial Intelligence for Echocardiography at Mass General. 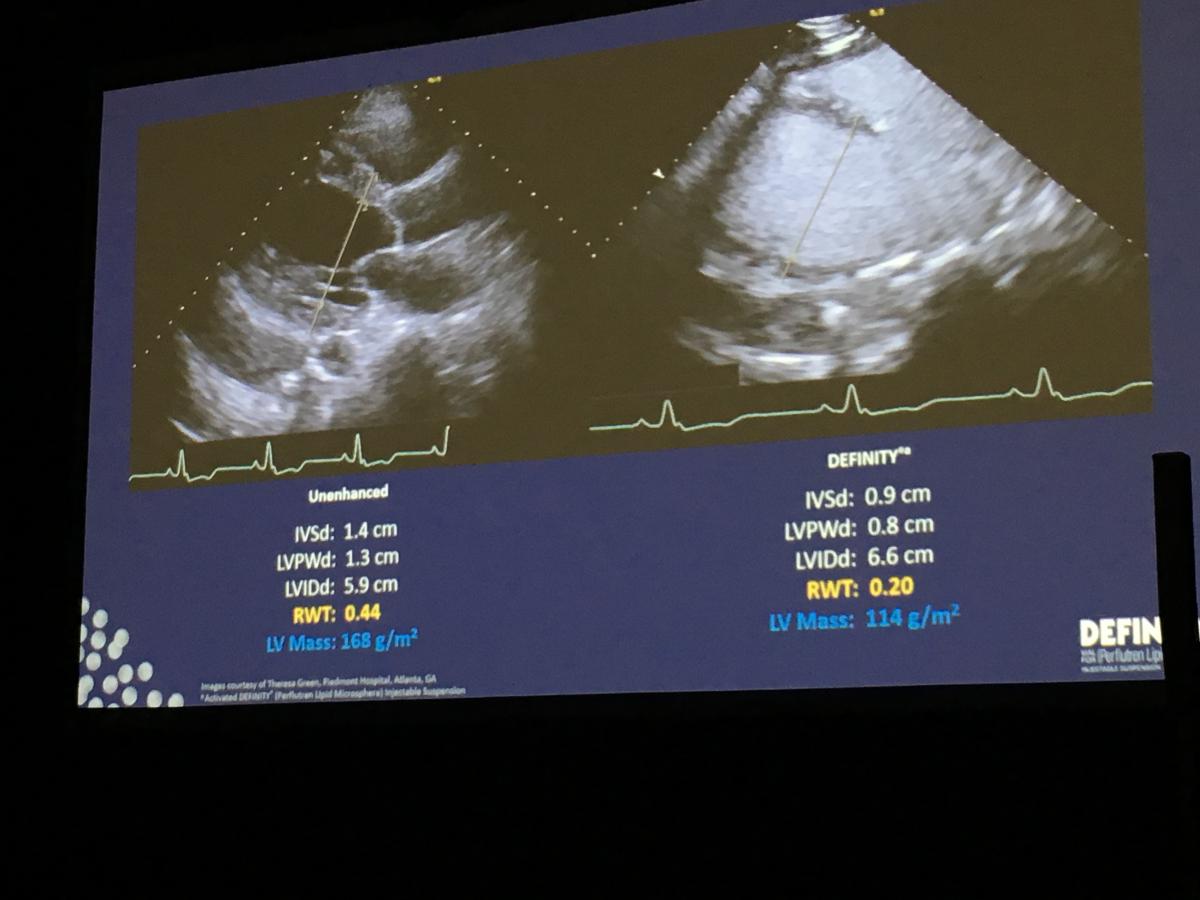 ASE recently created guidelines for the use of three commercially available ultrasound bubble contrast agents on the U.S. market. Previously, the ASE issued a consensus statement rather than a guideline on these agents, but that changed with the large amount of clinical study data now available, which supplied the clinical evidence necessary to create a more conclusive set of guidelines, said Sharon Mulvagh, M.D., FASE, FACC, FRCPC, professor of medicine, division of cardiology, Dalhousie University, Halifax, Nova Scotia, Canada, and professor emeritus, Mayo Clinic. She served as the co-chair for the guidelines committee.

She said one big change was in the public name ASE is now officially calling this type of contrast media, now referred to as "cardiovascular ultrasound enhancing imaging agents." Mulvagh explained the new term is being used so patients do not confuse them with the safety issues regarding gadolinium agents, iodine-based contrast or radioactive nuclear radiotracers.

Contrast is used in about 7 percent of cardiac ultrasound exams in the U.S. and a big limiting factor has been hospital protocols over intravenous (IV) access. This was a topic discussed in several sessions, where many agreed contrast might be useful to make a more definitive diagnosis in many exams, but sonographers are not always allowed to start IVs and nurses for this purpose are not always available. Mulvagh and several others in sessions said starting IVs is within the scope of practice for monographers, and noted centers that allow monographers to start IVs have a much higher usage of contrast, some in the range of 20-30 percent.

Watch an interview with Mulvagh in the VIDEO: New Guidelines for Echo Contrast Agents. 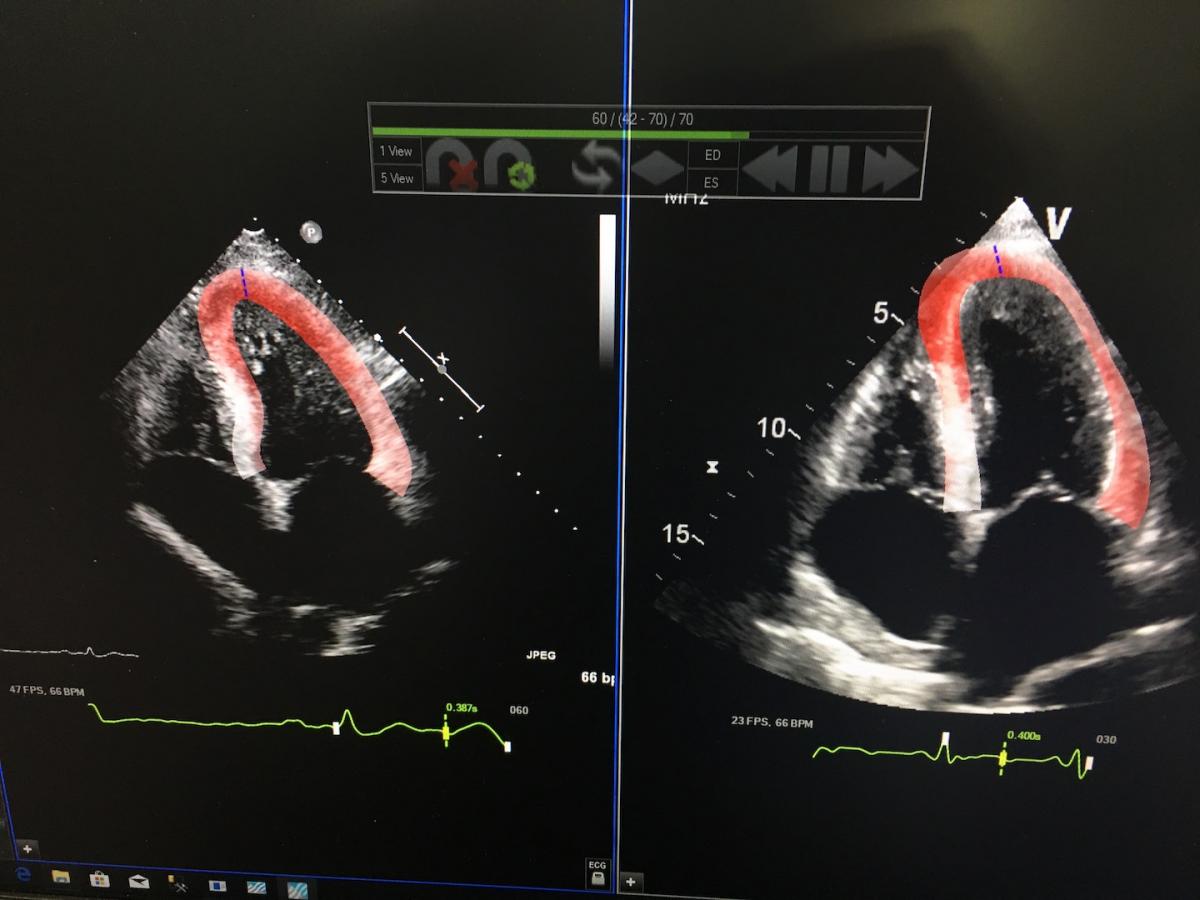 Strain imaging, also referred to as speckle or wall motion tracking, has seen a slow-growing increase over the past decade and there were numerous sessions on the topic at ASE. The main focus of cardiac strain use is in serial cardio-oncology echo exams, said strain imaging expert Marielle Scherrer-Crosbie, M.D., Ph.D., director of echocardiography at the Hospital of the University of Pennsylvania, and chair of the 2019 ASE sessions. She said these exams are used to monitor cardiac toxicity levels in cancer patients treated with radiotherapy near the heart (as in breast and lung cancers) or systemic chemotherapy agents. Strain has emerged as the primary way to track myocardial damage so therapy can be modified to preserve cardiac function and prevent heart heart failure.

Scherrer-Crosbie explains the technology and its application in more detail in the VIDEO: An Overview of Echo Strain Imaging.

ASE recently released revised guidelines for exams evaluating aortic and mitral regurgitation. Hung served on the committees that revised the guidelines and spoke in sessions about these updates. She offers an overview in the VIDEO: Echocardiography Guideline Updates for Aortic Valve Evaluations.

• Recommendations on the Echocardiographic Assessment of Aortic Valve Stenosis: A Focused Update from the European Association of Cardiovascular Imaging and the American Society of Echocardiography 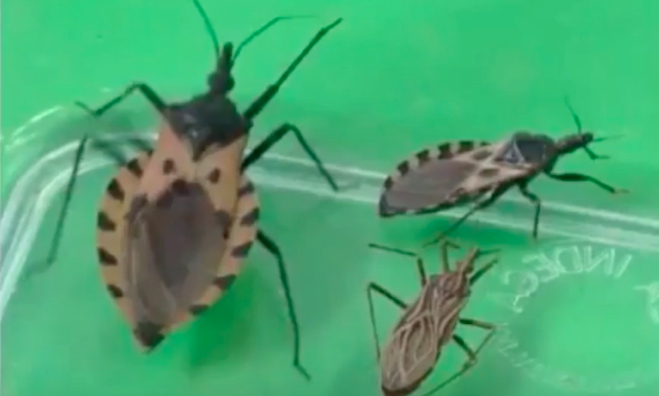 ASE also recently issued a set of recommendations for imaging of Chagas disease and outlined its cardiovascular impact as a chronic disease. Chagas disease is common in Central and South America, but it is often overlooked as a diagnosis in the United States and other countries. In the U.S., it is not a native disease, but it is frequently found in Central American migrants or travelers who visited these regions, said Federico Asch, M.D., FASE, director of cardiac imaging research and director of the cardiovascular imaging lab, MedStar Health Research Institute. Asch served as the co-chair of the group that created the guidelines to image Chagas disease and presented the information in ASE sessions.

Chagas, also called trypanosomiasis, is a tropical parasitic disease caused by the protist Trypanosome cruzi. It is spread through the bite of the triatominae insect, which is also known as the "kissing bug."

Echocardiographic Evidence of Improved Cardiac Function in the COAPT Trial 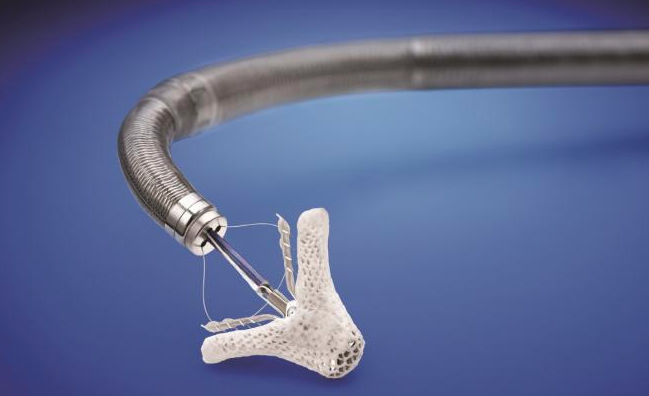 Asch and others also presented in sessions on the echocardiographic findings from the landmark COAPT Trial. This study was a late-breaker at the 2018 Transcatheter Cardiovascular Therapeutics (TCT) meeting. It showed implanting the transcatheter MitraClip mitral valve repair system greatly improved the symptoms in heart failure patients who developed mitral regurgitation due to their hearts enlarging.

Asch presented COAPT echocardiographic findings as a late-breaking session at the 2019 American College of Cardiology (ACC) meeting. He explains more in the VIDEO: Echocardiographic Findings in the COAPT Trial.

Read more about the COAPT Trial.

Ultrasound to Aid the Developing World 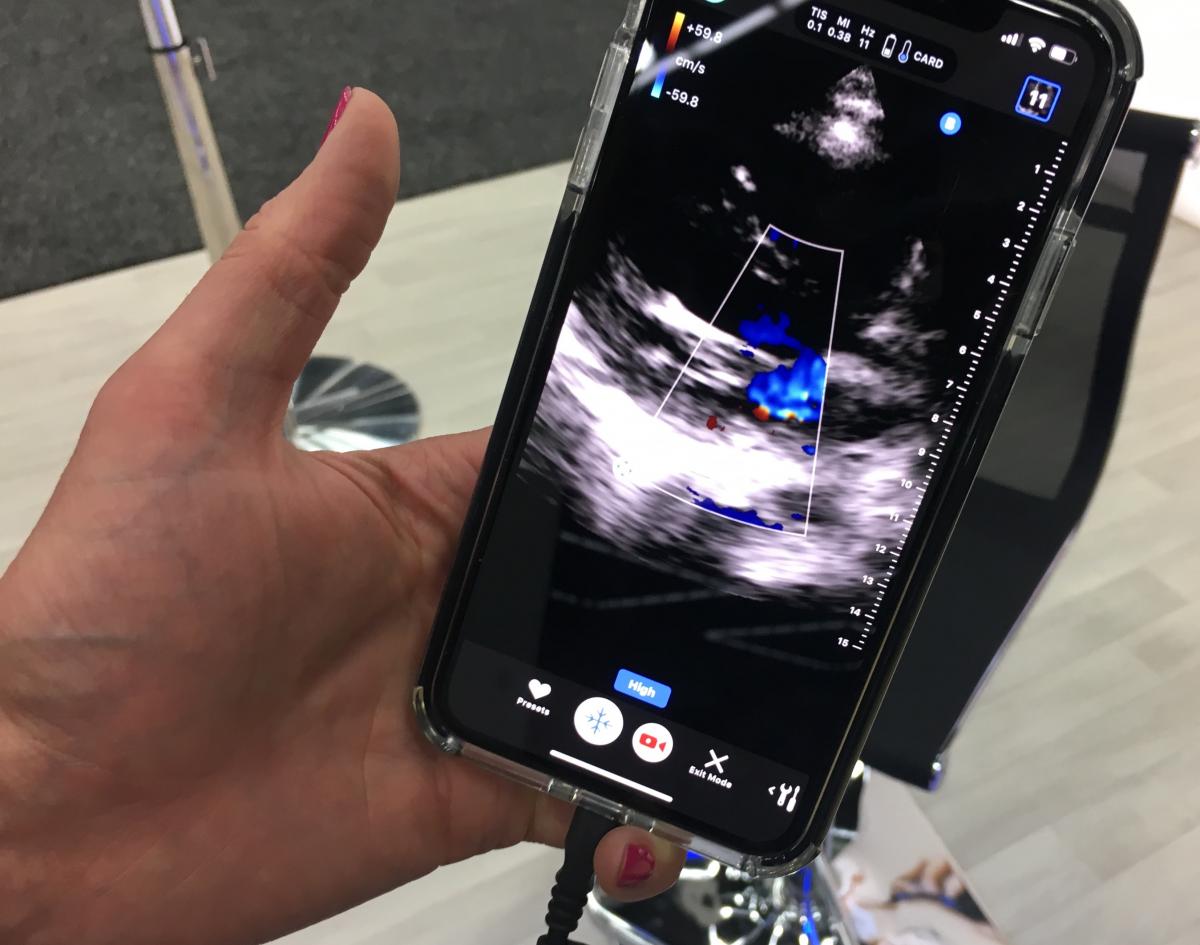 ASE has outreach programs to help improve health in the developing world and is looking for ways to better deliver healthcare to underserved populations. Several sessions mentioned how this might be accomplished through a combination of new, inexpensive, portable ultrasound imaging systems and the integration of AI to help better triage large numbers of rural patients to separate out the normals. The systems could flag the patients who have cardiac or other conditions so limited resources can be concentrated where they are needed.

Partho Sengupta, M.D., MBBS, chief of cardiology, West Virginia Heart and Vascular Institute, explained in sessions how wearable, smartphone-based apps and medical devices, and artificial intelligence might be used to cost-effectively triage larger numbers of patients in rural areas. He is involved with a pilot program using the Butterfly iQ app and ultrasound transducer system to turn a smartphone into an inexpensive point-of-care ultrasound system. He said the idea is to have novice ultrasound users screen more patients with these types of devices, and the exams being sent to a remote hospital for reading. He said AI algorithms also could be used to help flag any exams that show abnormalities, which would greatly speed reads and getting these patients treatment.

Sengupta shares more in the VIDEO: Use of Technology to Address Underserved Populations.

See a quick VIDEO demonstration of the Butterfly system on the show floor at ASE.

Is Echocardiography Ready for Conversion to 3-D Only?

What to Look for In Echo Reporting Software Systems