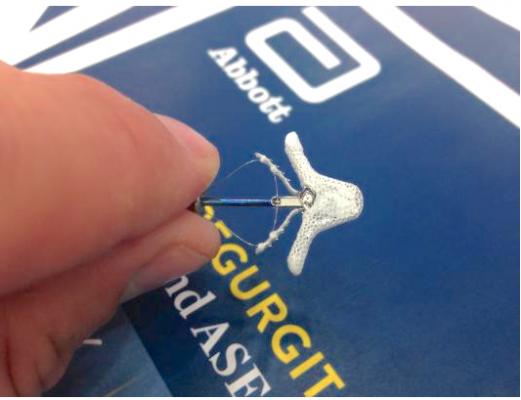 Findings from the COAPT trial, which have the potential to significantly change current clinical practice, were reported at the 30th annual Transcatheter Cardiovascular Therapeutics (TCT) scientific symposium, Sept. 21-25 in San Diego. The study was also published simultaneously in The New England Journal of Medicine.[1]

“The prognosis for heart failure patients who develop severe secondary mitral regurgitation is poor with limited treatment options,” said Gregg W. Stone, M.D., professor of medicine at Columbia University Irving Medical Center, and director of cardiovascular research and education at the Center for Interventional Vascular Therapy at NewYork-Presbyterian/Columbia University Irving Medical Center, who presented the results at TCT. “There is a great need to help improve outcomes for these very sick patients.”

Trial co-investigator William Abraham, M.D., FACC, professor of medicine and director of the division of cardiovascular medicine, The Ohio State University Wexner Medical Center, explains the results of the late-breaking COAPT Trial in this VIDEO interview at TCT 2018.

The MitraClip device is already approved in the U.S. for use in primary MR, a condition in which the mitral valve leaflets do not function properly due to a degenerative defect.

Whether the device is useful for secondary MR, in which the valve structure is normal but the ventricle is enlarged, causing the valve leaflets to fail to prevent backward flow (known as mitral regurgitation), is unknown. In the procedure tested in COAPT for secondary MR, the MitraClip device is attached to the mitral valve leaflets via a catheter that is then removed, leaving the clipped valve in place with less regurgitation.

COAPT was a randomized, parallel-controlled, open-label multicenter trial evaluating transcatheter mitral valve repair with the MitraClip device in symptomatic heart failure patients with moderate-to-severe or severe secondary MR. A total of 614 subjects were randomized at 78 centers in the United States and Canada. A total of 302 patients were assigned to the device and guideline-directed medical therapy (GDMT) in the device group and 312 patients were assigned to GDMT alone in the control group.

The primary effectiveness endpoint was the annualized rate of all heart failure hospitalizations through 24 months and the primary safety endpoint was freedom from device-related complications at 12 months. After two years, there were 160 total heart failure hospitalizations among those who received the MitraClip versus 283 for the control group. The annualized rates of heart failure hospitalization were 35.8 percent per patient-year in the device group versus 67.9 percent per patient-year in the control group (HR 0.53, 95 percent CI [0.40 to 0.70]; p<0.001). In addition, the 12-month freedom from device-related complications was 96.6 percent [lower 95 percent confidence limit, 94.8 percent], which exceeded the performance goal of 88 percent for the primary safety endpoint (p<0.001). All-cause mortality at 24 months with the device was 29.1 percent compared to 46.1 percent in the control group (HR 0.62, 95 percent CI [0.46 to 0.82]; p<0.001).

In addition to the reductions in hospitalizations and mortality, device treatment also resulted in improvements in quality-of-life measures and functional capacity. The study found a mean 12.5-point increase in the Kansas City Cardiomyopathy Questionnaire (KCCQ) overall summary score from baseline to 12 months after transcatheter mitral repair compared to a mean 3.6- point reduction in the control group. Similarly, exercise capacity as measured by six-minute walk distance (6MWD) decreased during 12-month follow-up by nearly 60 meters with GDMT alone but remained unchanged after transcatheter mitral repair. Heart failure classification (NYHA functional class) was also improved to a greater degree with the transcatheter device compared with GDMT alone at all follow-up times. Patients treated with the MitraClip also had a lower incidence of heart transplant or a left ventricular assist device (LVAD) (4.4 percent for the device group versus 9.5 percent for the control group).

“At two years, transcatheter mitral valve repair with the MitraClip device was found to be safe and effective. It substantially reduced the rate of hospitalizations and mortality, while improving quality-of-life and functional capacity,” added Stone. “This procedure gives cardiologists an important option for high-risk heart failure patients with secondary MR who remain symptomatic despite optimal medical therapy.”The COAPT trial was funded by Abbott Vascular. Stone reported consulting fees from Neovasc, Valfix and Gore, as well as equity/options in Ancora. He also reported that his employer, Columbia University, receives royalties from Abbott for sale of the MitraClip.

Watch the VIDEO: Impact of the COAPT Trial on Heart Failure Patients With Functional Mitral Regurgitation — an interview with Andreas Brieke, M.D., director of mechanical circulatory support, heart failure physician and site principal investigator for the COAPT Trial at the University of Colorado Hospital,