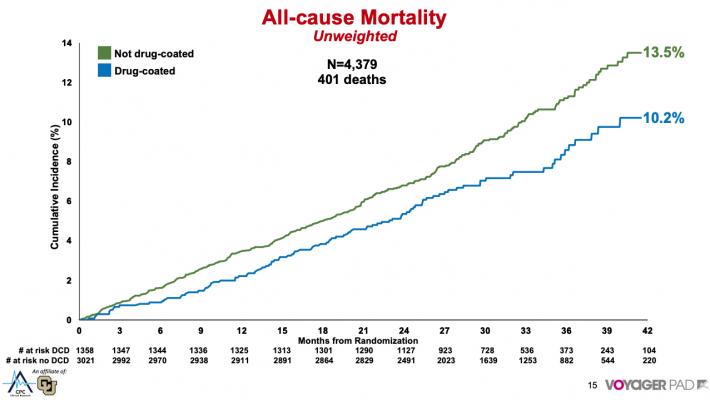 October 18, 2020 – A large subgroup analysis of a randomized clinical trial showed neither a mortality risk nor benefit associated with the use of paclitaxel drug-coated devices (DCD) in the treatment of peripheral artery disease (PAD). The study also found that the benefit of rivaroxaban use on reducing ischemic limb and cardiovascular outcomes was consistent regardless of whether a DCD was used.[1]

Paclitaxel drug-coated devices, including drug-coated balloons and drug-eluting stents, improve patency of lower extremity revascularization (LER) in patients with peripheral artery disease (PAD). However, meta-analyses published in December 2018 of randomized trials of DCD have reported increased long-term mortality compared with non-DCD.[2] These concerns have led to warnings from regulatory agencies about the use of DCD in patients with PAD. It also spurred a hugh amount of debate in the interventional community about the safety of paclitaxel. At TCT 2019, one day of the FDA town hall meeting was devoted to this topic and the key takeaway was that more data was needed to show either safety of DCDs or to clarify what is causing any increased mortality issues. This is the first large scale study to exmaine this and confirm the safety of paclitaxel devices.

The study also included randomization of patients to the anticoagulant rivaroxaban to confirm or eliminate the potential variable of the drug impacting any increased mortality signal.

“Inverse Probability Treatment Weighting (IPTW) successfully adjusted for known confounders and showed no mortality risk or benefit associated with DCD, including in subgroups by device type,” said Connie N. Hess, M.D., MHS. Hess is an associate professor of medicine (cardiology) at the University of Colorado School of Medicine, Aurora. “This analysis from VOYAGER PAD addresses many of the limitations of currently available data regarding mortality and paclitaxel and adds to the literature examining the safety of drug-coated devices.”

VOYAGER PAD was a double-blind, placebo-controlled trial of PAD patients undergoing LER randomized to rivaroxaban 2.5 mg twice daily or placebo on a background of aspirin 100 mg daily. Clopidogrel was allowed per operator discretion. The primary results of this trial, presented earlier this year at ACC and published in the New England Journal of Medicine,[1] found that rivaroxaban at a dose of 2.5 mg twice daily plus aspirin was associated with a significantly lower incidence of the composite outcome of acute limb ischemia, major amputation for vascular causes, myocardial infarction, ischemic stroke, or death from cardiovascular causes than aspirin alone.

This analysis examined the long-term safety of DCD and evaluated whether rivaroxaban 2.5 mg twice daily plus low dose aspirin versus low dose aspirin alone on the primary efficacy endpoint was consistent with versus without DCD use.

Deaths were prospectively collected and adjudicated. All-cause mortality, a prespecified secondary outcome, was the primary outcome for this analysis. Device type was collected at enrollment in patients undergoing endovascular LER.

Among 6,564 randomized patients, 66% (n=4,316) underwent endovascular index LER and were included in this analysis; median follow-up was 31 months (IQR 25, 37), and complete ascertainment of vital status was available for 99.6% of patients. During the qualifying endovascular LER, DCD was used for 31% (n=1,358) of patients. Patients receiving DCD more frequently had prior endovascular LER, had higher baseline use of dual antiplatelet therapy and statins, and were more often treated for
claudication than non-DCD patients.

In the unweighted analysis, lower associated mortality was observed among patients receiving DCD versus non-DCD (2.9 vs. 3.9 per 100 patient-years; 3.5-year Kaplan-Meier cumulative incidence of 10.2 vs.13.8%). After weighting, there was no association between DCD use and mortality (3.5-year cumulative incidence 12.1 vs. 12.6%, HR 0.95, 95% CI 0.83-1.09, p=0.49). The benefit of rivaroxaban 2.5 mg twice daily with aspirin compared to aspirin alone on reducing ischemic limb and cardiovascular outcomes was also consistent regardless of whether a DCD was used.

The VOYAGER PAD trial was funded by research grants to CPC Clinical Research from Bayer and Janssen.

VIDEO: Overview of Drug-coated Balloons and the Issue of Paclitaxel Safety — Interview with Juan Granada, M.D. 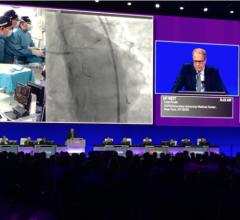 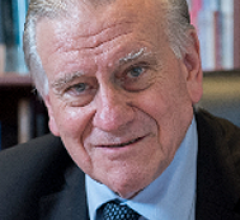 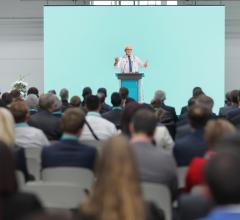