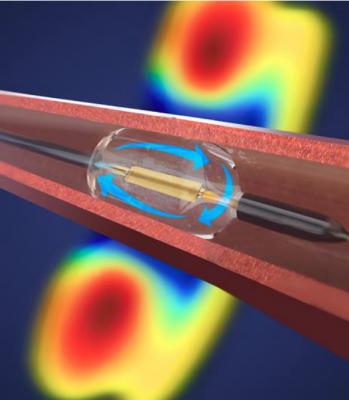 May 16, 2021 — Two months after undergoing renal denervation (RDN) with the ReCor Paradise renal denervation system, patients with high blood pressure who did not respond to treatment with multiple medications had a greater reduction in daytime systolic blood pressure than patients who did not receive RDN, with no difference in major adverse effects. This was according to the late-breaking RADIANCE-HTN TRIO trial presented at the American College of Cardiology (ACC) 2021 scientific session.

This study was simultaneously published online in The Lancet at the time of presentation.[1]

Renal denervation uses a catheter to deliver energy and ablates overactive nerves in the kidneys to decrease their vasoconstriction and dilate the vessels to allow more filtration by the kidneys. The procedure is performed if medications alone cannot lower a patients severe hypertension. However, there have been mixed results with some previous RDN trials for other device technologies.

“This study has shown for the first time that RDN can effectively lower blood pressure in patients in whom it is uncontrolled despite standardized treatment with three guideline-recommended medications,” said Ajay Kirtane, M.D., professor of medicine at Columbia University Vagelos College of Physicians and Surgeons and an interventional cardiologist at New York-Presbyterian/Columbia University Irving Medical Center. Kirtane is a co-principal investigator of the trial. “RDN offers an additional tool that we could use to help these patients, hopefully achieving better overall control of hypertension, especially if longer-term data support the durability and safety of the procedure,” he said.

Patients in this trial who received ultrasound ablation RDN saw a median reduction of 8 mmHg in their daytime ambulatory systolic blood pressure compared with their level prior to treatment. They also had a 4.5 mmHg greater drop in median blood pressure compared with those who received the sham procedure, despite both groups receiving the same three guideline-recommended antihypertensive medications as background therapy. The benefit of RDN was consistent regardless of sex, ethnicity, age, waist size or blood pressure level at study entry.

The results were also concordant with previous results from the RADIANCE-HTN SOLO trial.

This trial first put all patients on a three-drug combination pill that combined an ARB, CCB and a diuretic. This included valsartan 160mg or olmesartan 40mg, a amiodipine 10mg or 5 mg, and hydrochlorothiazide 25mg. This is noteworthy, because after four weeks, the patients were evaluated and of the 989 patients, 839 of them had resolved their hypertension with medication adherence and did not undergo RDN. For the RDN patients, compliance was still at 75% at two months following the procedure or sham procedure.

"Starting patients on this three-drug regiment was able to control their hypertension to a higher degree than would allow them to participate in the trial," Kirtane said. "This is an important point, irrespective of where the role of denervation is in the future."

Adherence to taking the single pill rather than a combination of several pills was noted for helping achieve an 83% medicate adherence during the trial period. Late-breaking panelist George Bakris, M.D., director, comprehensive hypertension center, University of Chicago, said this was outstanding. He explained that adherence for hypertension medication is usually only around 45% and the fact that the trial doubled this is remarkable beyond the positive RDN data.

The Paradise catheter device is advanced into the renal arteries in the cath lab. It uses a balloon catheter filled with water to cool the vessel wall as ultrasound-based ablation energy is delivered from a transducer inside the catheter. It delivers a ring of ablative energy to a depth of 1-6 mm. Kirtane said it requires 2-3 sonications lasting 7 seconds each in each of the main renal arteries.

Other studies in patients with less-severe hypertension have shown that, compared with a sham procedure, RDN reduces blood pressure. The procedure is performed in a hospital catheterization lab under local anesthesia and with X-ray imaging guidance. A catheter is directed from the femoral artery in the thigh to the arteries that supply blood to the kidneys. There, the catheter delivers ultrasound-based energy to the nerves in the arteries. Patients may be discharged the same day or may spend one night in the hospital after the procedure.

The international study, known as the RADIANCE-HTN TRIO trial, enrolled 989 patients in the U.S., the United Kingdom and five European countries. Patients’ average age was 53 years and 80% were men. At study entry, patients were taking an average of four antihypertensive medications. Despite this, patients’ average blood pressure at study entry was 163/104 mmHg. (According to the 2017 ACC/American Heart Association Guideline for the Prevention, Detection, Evaluation, and Management of High Blood Pressure in Adults, blood pressure of 130/80 mmHg or more is considered high.) Patients’ median body mass index (BMI) was about 32.7 (a BMI of 30 or higher falls within the obesity range). Roughly a quarter of patients also had Type 2 diabetes.

After four weeks on this once-daily, three-drug regimen, patients whose blood pressure was still 135/85 mmHg or higher as assessed by ambulatory blood pressure monitoring underwent noninvasive imaging to ensure that their renal arteries were suitable for RDN. A total of 136 patients were then randomly assigned to receive either ultrasound-based RDN or a sham procedure. A sham procedure is used in non-pharmacological studies; a control group receives an imitation procedure instead of the actual medical intervention that is being studied.

The primary efficacy endpoint was the change in daytime ambulatory systolic blood pressure (the top number) from study entry to two months. The investigators also monitored major adverse events occurring within 30 days of the procedure, including death from any cause, kidney failure, a blood clot, any complications involving the veins or arteries serving the kidneys that required treatment, or a severe increase in blood pressure.

Kirtane said that he and his colleagues will continue to follow the patients in the study for three years to assess the durability, safety and ongoing benefit of the RDN procedure.

This study was funded by ReCor Medical Inc., the manufacturer of the Paradise renal denervation system. Kirtane reports institutional funding to Columbia University and the Cardiovascular Research Foundation from ReCor Medical.