Researchers May Be Getting Closer to Predicting Patient Risk of STEMI 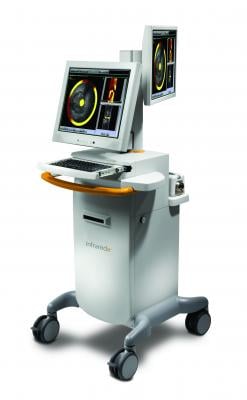 July 24, 2013 — Infraredx Inc. announced the publication of key data supporting the ability of its TVC imaging system to detect lipid core plaque in patients with ST-segment elevation myocardial infarction (STEMI). The study, published in JACC: “Cardiovascular Interventions,” details the identification of a specific cholesterol signature by near-infrared spectroscopy (NIRS) at the site of the culprit lesions causing STEMI, a dangerous type of heart attack. While the TVC Imaging System has been used in more than 3,000 patients worldwide, the present clinical study is the first report of its use in a consecutive series of STEMI patients.

In this study, researchers utilized the TVC imaging system to image the culprit vessel, as identified by angiography, in 20 STEMI patients referred acutely for primary percutaneous coronary intervention. In 19 of the 20 patients, a distinct signature of lipid core plaque (LCP) was identified with NIRS specifically at the location of the culprit lesion. To confirm plaque composition, the researchers compared the NIRS imaging results from the sites causing the blockage and subsequent heart attack to results from non-culprit segments of the patients’ vessels as well as to 46 autopsy specimens serving as the gold-standard of histology. The study’s novel in vivo findings of lipid core plaque at STEMI culprit sites correspond with multiple autopsy studies that have demonstrated that rupture of a large lipid core plaque is the most frequent cause of a fatal myocardial infarction. Most importantly for predictive and preventive purposes, it is likely that the large lipid core plaques observed at STEMI culprit sites were present and detectable before plaque rupture and thrombus formation and the acute coronary event.

“There are many possible treatments already available for coronary plaques at increased risk for rupture and thrombosis,” said James E. Muller, M.D., founder and chief medical officer of Infraredx. “The primary challenge cardiologists have faced has been the identification of plaques likely to cause major adverse events, including heart attacks. The identification of a clear signal so closely associated with culprit plaques in patients suffering STEMI is a major step forward in the effort to identify and treat vulnerable coronary plaques before they cause a catastrophic event.”